The movie in which we should not play again: The link between wage growth in lei and their decrease in euro - CursDeGuvernare.ro

The movie in which we should not play again: The link between wage growth in lei and their decrease in euro 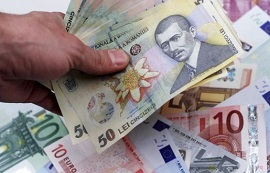 Official statistics show that in 2008, when „the economy was roaring” more powerfully than now and there were plenty of foreign investments coming, the populist enthusiasm of the electoral campaign led to massive increases of pensions and salaries.

The latter rose by 26.1% in gross terms and by 25.6% in net terms (incidentally, this is an eloquent proof that we do not have flat tax).

Pay attention, though, the percentage increase of the purchasing power resulted from this wage growth was only 16.5% in real terms, because of the price growth.
Moreover, two years of decline followed for the same purchasing power, by -1.5% in 2009 and more -3.6% in 2010, although the nominal salaries were higher.

The increase of the REAL purchasing power following the measures taken in 2008 was only two-thirds of the NOMINAL wage increase. Two years of apparently normal salary increases followed, which actually led to a DECREASE OF THE PURCHASING POWER.

Specifically, after they offered the moon so that they could get fatter, politicians had to tighten the belts for population so that to not get the wrong sow by the ear with the budget deficit and the leu-euro exchange rate. It was interesting how the increase of about 25% in 2008 was reversed in 2010 with sufficient precision, for the employees from the public sector of course, as the state could not directly intervene in the private contracts.

The small detail that politicians intentionally missed, with all their economic programs, is that the ultra-increased wages from 2008 were in fact 10% lower in euros, in 2009. That was caused by the exchange rate’s readjustment from 3.6827 lei / euro in 2008 to 4.2373 lei / euro in 2009, which affected the house prices and the capacity to pay the instalments for these houses, as depreciated in euro as they were.

It is no longer necessary to consider the car prices (also in euro), which is the second largest expense for a household and even the first largest one by reference to the life of the asset purchased. Nor the payments for the holidays abroad, be they on the coast of our southern neighbours, indexed by their leva to euro.

Regarding the GDP in euros, it literally collapsed by -17%, not merely -7% as statistics indicated that would be in real terms. Real, no doubt, but we paid the debts and the interest on public debt in euros, not lei – euro amounts hardly collected in 2009 from decreased taxes (what a coincidence of a so-called economic doctrine), at an exchange rate depreciated by 15%.

Also noteworthy is the inherently reversed evolution caused by the severe disturbance of the macroeconomic balances, having purely political causes. GDP expressed in euro increased in 2010, from about EUR 115 billion to EUR 120 billion and salaries rose by 2.4% in lei, in nominal terms and by 3% in euros, which was reasonable, but the wage purchasing power continued to fall by -3.6%.

We could not maintain otherwise the exchange rate at a reasonable level, implicitly neither the loan instalments for houses (be they in euros or Swiss francs). Not to mention the exploding deficits of the social security system or the healthcare sector (guess what currency is used for purchasing equipment, medical equipment or medicines). Now we repeat, without any sense, the same predictable scenario that will surprise us at some moment by 2017-2018.

Altogether, the case of the wage increases (be aware that they are only for some, the rest will remain only indirect, but very real payers of the general invoice) resembles the fictitious reports once made by the former State Planning Committee. Paraphrasing the famous academician N.N. Constantinescu, who was referring to the national income, we pretend to increase salaries, and the increase will pretend to come.