Romania of investments in a European context: On the list of declines, but still ranking in the first third of it 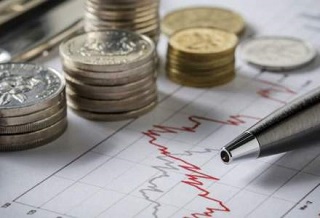 Last year, total investment at the national level (both from the public and private sources) in the EU member states amounted to almost EUR 3,100 billion.

Constructions accounted for about half of this amount, machinery, equipment and systems for 31% and intellectual property rights for 19%.

Noteworthy, investments in intellectual property rights, quasi-inexistent in Romania, recorded the highest growth over the last ten years, according to data published by Eurostat. 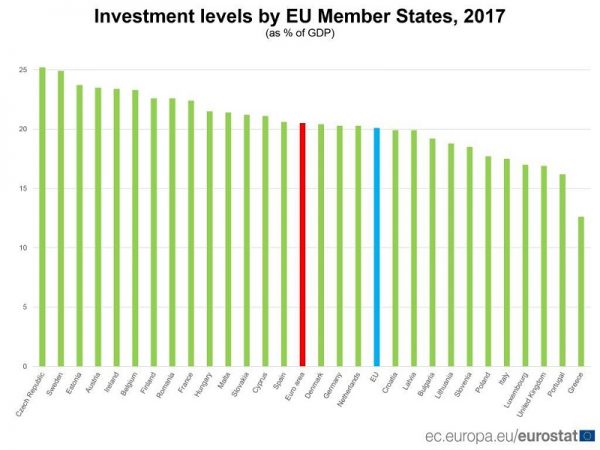 And the bad part …

The largest declines in investments relative to GDP have occurred over the last decade in Latvia (-16.5 percentage points), Greece (-13.4 pp) and Estonia (-12.9%). 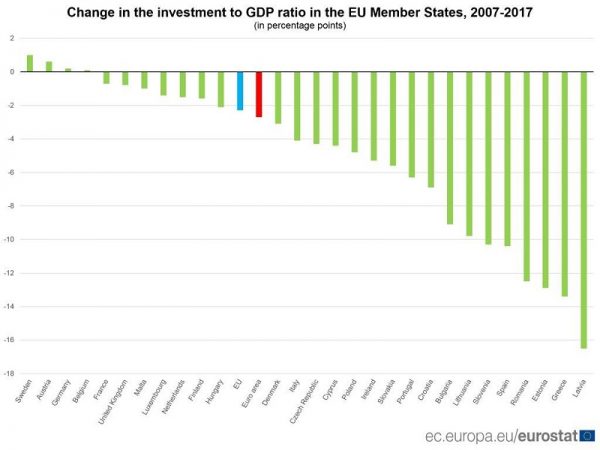 An attenuating circumstance is, however, that the starting data were very good (in the context of occupying business positions in a new EU member country with a relatively large market).

Noteworthy, though, this record level coexisted with a current account deficit of about 14% of GDP. Therefore, the massive adjustment in 2009 to only 25.4%, even though GDP lost a little more than seven percent.

After GDP returned in real terms to the 2008 level (in 2014), the peak was reached in 2015 (24.7%) and afterwards (also because of the decline in public investment) went down last year to 22.6%, the lower level in the last ten years, but still significantly above the EU average.