Two contradictory phenomena occur during the development of an economic sector that is vital for development: on one hand, we have the boom in the… END_OF_DOCUMENT_TOKEN_TO_BE_REPLACED

Romanian leu – marginally declining against the euro, but significantly appreciating against zloty, forint and koruna

Romania’s big re-launch plan for the next decade places transport infrastructure at the centre of investments, with an allocation of 60% of the total amount.… END_OF_DOCUMENT_TOKEN_TO_BE_REPLACED

The general consolidated budget registered in the first half of the current year a deficit of about RON 45 billion, equivalent to 4.2% of the… END_OF_DOCUMENT_TOKEN_TO_BE_REPLACED 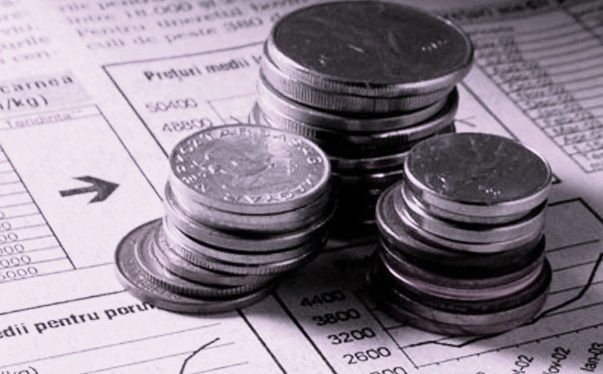 BNR made a thorough analysis of Romania’s status in terms of real convergence with Western economies. A precondition for adopting the euro, in line with the treaty signed at the moment of the EU accession. Here are the main conclusions regarding the evolution of the employees’ purchasing power.

Over the past 17 years, the convergence in terms of GDP per capita in Romania (PPS, meaning at the local parity of the standard purchasing power, which considers the price level to ensure fair comparability between countries) has accumulated 33 percentage points (from 26% of the EU average in 2000 to 59% of the EU average in 2016), the second highest among the former socialist states, after Lithuania (+38 pp)

The ratio between the gross national wage, which represents the value added by Romanians in the country and abroad, and the GDP, which expresses the gross added value obtained in the country by Romanians and foreigners, decreased by 1.8 pp, from 99.3% in 2000 to 97.5% in 2016. An evolution similar to Lithuania (-1.7 pp) and Poland (-2.6 pp) but weaker than Hungary (+2.8 pp).

From the data presented, it results that Romanians were extremely poorly remunerated for the work done in 2000, by reference to the EU average. The approaching accession and then the fast integration into the Western production chains following the foreign investment that took over the key sectors of the economy have somehow mitigated the situation but the wage purchasing power lagged significantly behind the GDP indicator (we recall, 59% of the EU average).

Comparisons with other former communist countries

There is a fundamental difference visible between Romania and Poland, the country with the closest economy size and structure to ours. Romania recorded the highest wage growth and Poland the lowest growth, relative to the EU average.

Instead, we have witnessed the highest price increase in real terms after the Czech Republic (which has maintained a strong currency and become a kind of Switzerland of the Central Europe) and we almost reached Poland by the level of prices (from the score of 40% – 55% in 2000, we reached 51% – 52% in 2016, against the background of the price decrease in Poland relative to the EU average.

This, combined with the moderate advance in the Polish wages, explains the country’s competitiveness in the region as well as in the Western markets. The reason (which we should pay attention to!) for which Lithuania has remained below us in terms of performance in improving the standard of living in the 16-year interval mentioned is precisely the advance of prices to the level registered in the Czech Republic.

To keep in mind, the increase in the standard of living in Hungary, Poland and the Czech Republic was only one-third of that in Romania. This is the reason why we can say that our recovery since the beginning of this century was quite spectacular. Maybe we did not manage to get closer to the West as much as we wanted, but we have successfully come closer to the Central Europe. 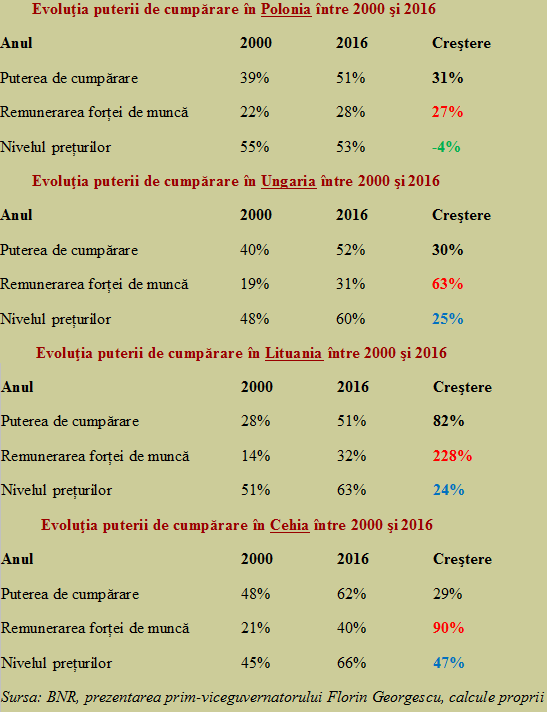 Hence, the analysis reached a conclusion of a sustainable labour cost development, which, through its increases, has not eroded Romania’s economic competitiveness within the EU. That, even though the minimum national wage has increased by 81% between 2014 and 2017 (with a low reference base, but that is why we can no longer increase it at a high rhythm from now on), as well as in the other countries in the region (with higher bases): the Czech Republic (+ 29%), Hungary (+ 26%), Slovakia (+ 24%), Poland (+ 19%).

The assertion is supported by the fact that, although labour costs increased in the period 2012-2017, 700,000 new jobs have been created, especially in the real economy. The wage bill growth process did not affect the competitiveness of the economy as a whole and the employees have been redistributed between economic sectors as a result of the change in the production structure.

This is also an indicator that could tell us who uses and who benefits from the value added in the Romanian economy. Although a possible analysis should go beyond the simplistic form of how much goes to the foreign capital that has invested here and how much to the domestic capital and/or the labour force.

That is, to detail at the level of the income inequality in our country – 8.2 to 1, the ratio between the richest 20% of Romanians and the poorest 20%, about double the Czech Republic (3.5 to 1), Hungary (4.3 to 1) and Poland (4.9 to 1). Respectively, besides the convergence with others, let’s see how we converge with ourselves.

Luca de Meo (foto), the new general manager (CEO) of Renault group, considers that Dacia project proved to be a miracle and that no one… END_OF_DOCUMENT_TOKEN_TO_BE_REPLACED

A former Soviet airbase in central Romania could become a hub for US Air Force operations in south-eastern Europe, where the Pentagon is seeking to… END_OF_DOCUMENT_TOKEN_TO_BE_REPLACED

Nuclearelectrica's Board of Directors has been mandated to initiate proceedings to terminate negotiations with China General Nuclear Power Group (CGN), as well as legal effects… END_OF_DOCUMENT_TOKEN_TO_BE_REPLACED

Romania imported an amount of electricity of almost 796 GWh in the first month of this year, by more than 36% above what it exported… END_OF_DOCUMENT_TOKEN_TO_BE_REPLACED

GFG Alliance has committed to invest one billion euros to upgrade Galati steel plant in order to reduce emissions and increase production. Another EUR 1… END_OF_DOCUMENT_TOKEN_TO_BE_REPLACED

The Transport Ministry, as the Intermediate Body in Transport, approved the financing request for the project "Construction of Sibiu - Pitesti highway", Sections 1, 4… END_OF_DOCUMENT_TOKEN_TO_BE_REPLACED

Lack of trust in authorities, corruption and low living standards are the main reasons why young people leave Romania. The data is part of a… END_OF_DOCUMENT_TOKEN_TO_BE_REPLACED

Romania is the EU country with the fewest cars in terms of the number of inhabitants, according to data recently published by Eurostat. We appear… END_OF_DOCUMENT_TOKEN_TO_BE_REPLACED

The Government is preparing the public for the first measures aimed at avoiding the budget slippage, which would be applied by the PSD-ALDE government. News… END_OF_DOCUMENT_TOKEN_TO_BE_REPLACED

French Prosecutor Jean-Francois Bohnert will be appointed as head of the European Financial Prosecutor's Office, a position for which he was heard on Thursday, 11… END_OF_DOCUMENT_TOKEN_TO_BE_REPLACED

Romania recorded the highest road deaths in the EU also last year, with 96 deaths per one million inhabitants in 2018, almost double the EU… END_OF_DOCUMENT_TOKEN_TO_BE_REPLACED

Sorina Pintea announced on Thursday further new changes that will be brought to the functioning of the health care system, including new rules for employment… END_OF_DOCUMENT_TOKEN_TO_BE_REPLACED

The new order on approval and selection procedures for insolvency practitioners is an important step to a very good direction, industry experts say. ANAF is… END_OF_DOCUMENT_TOKEN_TO_BE_REPLACED