The intergovernmental agreement between the United States and Romania in the nuclear-civil cooperation field has received the European Commission’s approval, and Romania will start construction… END_OF_DOCUMENT_TOKEN_TO_BE_REPLACED

A system which can save Romania from the packages waste and, at the same time, can ensure fulfillment of obligations in the field towards the… END_OF_DOCUMENT_TOKEN_TO_BE_REPLACED

Romanian Leu was much more stable during the pandemic than the currencies of Central European countries with a similar exchange rate regime, the Czech Republic,… END_OF_DOCUMENT_TOKEN_TO_BE_REPLACED

Missing a historical chance: budget implementation on which rectification is based. How we blocked consolidation 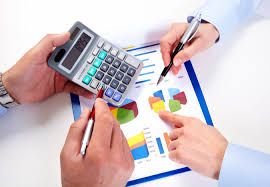 The consolidated general budget recorded a deficit of ROL 5.14 billion at the end of the first seven months of 2017, equivalent to 0.63% of the GDP estimated for the current year.

The result of nearly three and a half billion lei weaker than in the first seven months of 2016 came from combining the advance of ROL 11.6 billion on the revenue side with over ROL 15 billion on the expenditure side. That is, Romania has pressed the accelerator on the expenditure side, above the otherwise real possibilities given by the good economic growth, until the budget implementation started to slide and smoke.

Note: Contrary to what the current government critics publicly and stubbornly circulated, no matter what the arguments, budget revenues have significantly increased in relation to GDP. That is, it has been collected more than last year from the economic growth. The real problem is the hazardous spending, with a destabilizing effect on the national currency.

If we had limited ourselves in 2017 to go with the revenue increases in line with the economic growth compared to 2016, we would have had no public deficit after the first seven months of the year.

The Government has missed the historic chance (which we shall not meet again soon and I hope to Goodness that I am wrong) to strengthen the mid-term hardly earned macroeconomic stability after a period of great sacrifices for the population.

A serious fact, if they have risen to a significantly higher proportion than revenues, expenditure has not even been oriented to development and investment, but went to the bottomless consumption based on questionable criteria (for example, by the pension point artificially inflated, to all pensioners in equal proportions, irrespective of the pension level).

To keep in mind, this September it is due to be paid over EUR 1 billion of the macroeconomic stabilization loan taken in 2009 from the European Union, an expenditure which we did not have in 2016, due to the programming of maturities related to the election campaign (as it turns out, not only that winter is not like summer, but 2017 is not like 2016).

But what happened on expenditure side?

By expenditure chapters, it is remarked how the clear exit from the salary part of 7% of GDP recommended by the international institutions and assumed in 2016 by our country went somehow off the track to eight and a half of GDP and the phenomenon can only worsen next year, as the measures in this regard were already taken by the Government.

Basically, almost all the expenditure increase was focused on staff costs, where it added more than half a percent of GDP in the first seven months. In fact, the additional social assistance has been applied so far by drastically limiting investment (see the 0.2% of GDP up and down), a sort of trade-in that sacrificed the social development and the future for immediate personal consumption in favour of the past. 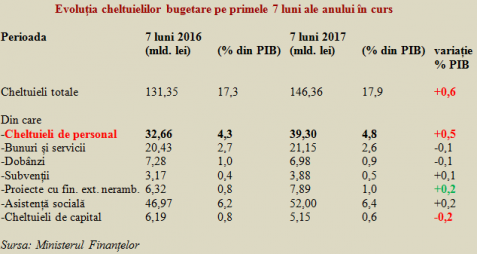 We recall that the arbitrary increase of pensions by 9% as of July 1, applied AFTER the 5% increase from January 1, 2017, will cause big and PERMANENT problems with the increasingly substantial deficit (more than four billion euros annually) of the social insurance budget. Experience has shown that the adjustment applied in a crisis context on benefits that assumed an eternal economic growth to high values can no longer be done for legal reasons.

We also remind the beneficiaries that by means of mandatory 30% – 40% subsidies from the state budget to cover the pension gap, they will pay by themselves a large part of their own pension, by paying VAT, excise duties, direct taxes, etc. And that comes at the cost of weakening the purchasing power of the national currency in which they collect their income.

By the way the current budget implementation is carried out the emphasis has clearly shifted from sustainable mid- and long-term development towards irresponsible short-term consumption. A tendency to increase and continue to be seen in the level of accumulated public deficits. Obviously, it cannot be a question of if but when a major slippage, with the corresponding painful corrections, would occur.

Luca de Meo (foto), the new general manager (CEO) of Renault group, considers that Dacia project proved to be a miracle and that no one… END_OF_DOCUMENT_TOKEN_TO_BE_REPLACED

A former Soviet airbase in central Romania could become a hub for US Air Force operations in south-eastern Europe, where the Pentagon is seeking to… END_OF_DOCUMENT_TOKEN_TO_BE_REPLACED

Nuclearelectrica's Board of Directors has been mandated to initiate proceedings to terminate negotiations with China General Nuclear Power Group (CGN), as well as legal effects… END_OF_DOCUMENT_TOKEN_TO_BE_REPLACED

Romania imported an amount of electricity of almost 796 GWh in the first month of this year, by more than 36% above what it exported… END_OF_DOCUMENT_TOKEN_TO_BE_REPLACED

GFG Alliance has committed to invest one billion euros to upgrade Galati steel plant in order to reduce emissions and increase production. Another EUR 1… END_OF_DOCUMENT_TOKEN_TO_BE_REPLACED

The Transport Ministry, as the Intermediate Body in Transport, approved the financing request for the project "Construction of Sibiu - Pitesti highway", Sections 1, 4… END_OF_DOCUMENT_TOKEN_TO_BE_REPLACED

Lack of trust in authorities, corruption and low living standards are the main reasons why young people leave Romania. The data is part of a… END_OF_DOCUMENT_TOKEN_TO_BE_REPLACED

Romania is the EU country with the fewest cars in terms of the number of inhabitants, according to data recently published by Eurostat. We appear… END_OF_DOCUMENT_TOKEN_TO_BE_REPLACED

The Government is preparing the public for the first measures aimed at avoiding the budget slippage, which would be applied by the PSD-ALDE government. News… END_OF_DOCUMENT_TOKEN_TO_BE_REPLACED

French Prosecutor Jean-Francois Bohnert will be appointed as head of the European Financial Prosecutor's Office, a position for which he was heard on Thursday, 11… END_OF_DOCUMENT_TOKEN_TO_BE_REPLACED

Romania recorded the highest road deaths in the EU also last year, with 96 deaths per one million inhabitants in 2018, almost double the EU… END_OF_DOCUMENT_TOKEN_TO_BE_REPLACED

Sorina Pintea announced on Thursday further new changes that will be brought to the functioning of the health care system, including new rules for employment… END_OF_DOCUMENT_TOKEN_TO_BE_REPLACED

The new order on approval and selection procedures for insolvency practitioners is an important step to a very good direction, industry experts say. ANAF is… END_OF_DOCUMENT_TOKEN_TO_BE_REPLACED