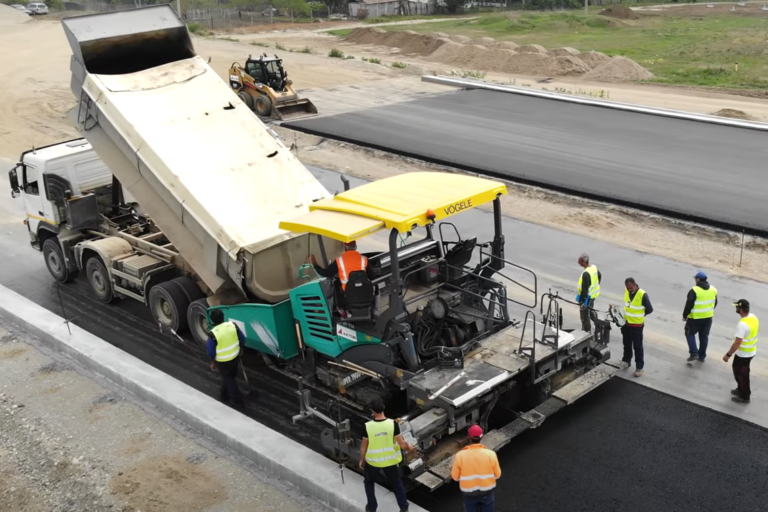 The larger the development plan, the higher the imports: from the current need for asphalt bitumen, Romania produces only 20%: the entire quantity needed for the next decade highway mega plan will be important from neighbours.

Government plans tell about building 3,000 km of highway in the next 10 years – according to Romania’s official re-launch plan for the next decade (a LINK-HERE).

Romania currently produces less than 10% of this quantity annually. The rest of the quantity, in order to have highways, must be imported.

Romanian Association of Road Builders (ARCA) has made available to cursdeguvernare.ro the evaluation of bitumen consumption for 1 kilometre of highway built based on the technical norms for designing, building and modernising roads.

The calculations made by ARCA show consumption of 10,200 tons of asphalt mixtures per kilometre of highway (asphalt carpets set out in road systems for highways are composed of 3 layers – base, connection and wear), and for the bitumen contained in these mixtures a consumption of about 500 – 600 tons of bitumen for 1 km of highway.

This means that for the new 3,000 km of highway we will need 1.8 million tons of bitumen.

Current needs are added to this (the quantity needed for the annual restoration of asphalt carpets in localities or the existing national road network) which, according to specialists, amount to 500,000 tons per year.

One producer – which covers only 20% of the current demand, without the investments from the Recovery Plan

Natural bitumen, impregnated with sand, is mined in Romania in Bihor and Prahova.

The only company that still does this in Romania is Rompetrol Rafinare (part of KMG International, former Rompetrol Group), at Vega Refinery in Ploiesti. The other companies that were still producing bitumen – Arpechim and Suplacu de Barcau – were closed.

The internal annual production of bitumen, according to the experts in the field interviewed by cursdeguvernare.ro, is 120,000 tons, out of the annual quantity needed for current works of 500,000 tons.

Theoretically, after the launch of the construction program for the 3,000 km of highways, the bitumen need will increase by 200,000 tons per year.

The difference – 580,000 tons per year – will be covered by imports. Who are the bitumen importers: