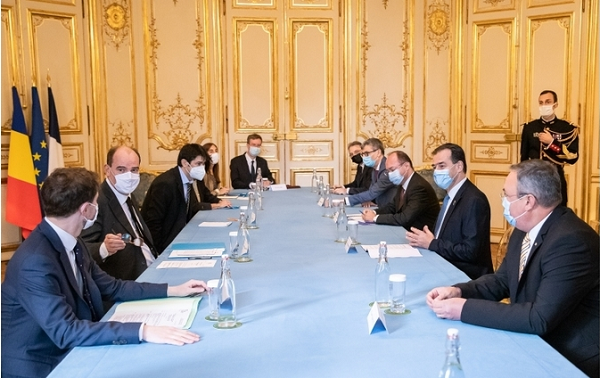 Prime Minister Ludovic Orban announced on Monday that he has signed with his French counterpart, Jean Castex, the roadmap on the partnership between Romania and France for next 4 years, which aims at strengthening the cooperation in the economic, defence, energy fields as well as in – infrastructure, agriculture, communications and culture.

The head of the Romanian Government stated after the meeting with his French counterpart that a declaration of intent on the cooperation in the civil nuclear field was signed, „aimed at collaborating with strategic partners in building nuclear 3 and 4 and reactor modernization repairs in Reactor 1, within a broader framework with strategic partners”.

Ludovic Orban also said that Nuclearelectrica has signed an agreement with Orano, a French company.

Romania and the USA signed an intergovernmental agreement two weeks ago for the construction of Units 3 and 4 of Cernavoda Power Plant, for the upgrading of Unit 1 and the cooperation on various levels in the civil nuclear field in Romania. At that time, the Minister of Economy announced that in addition to the USA, Canada and France would join the project.

Romania’s accession to Schengen, objective of the Strategic Partnership

„We have introduced important objectives for Romania in the Strategic Partnership, such as the accession to Schengen Area, the accession to the Organization for Economic Cooperation and Development, having a guarantee of support from France for the objectives we pursue,” Prime Minister Orban announced during a conference organized on Monday evening at the Romanian Embassy to Paris.

Topics of the day in military cooperation

„In terms of military cooperation, we have addressed current issues such as the contract regarding the corvettes. We also presented our point of view on that. There have been several lawsuits filed by a competitor against the contract award decision taken by the tender commission. As soon as this litigation will end in court, from our point of view, we are ready to sign the contract, as for us is extremely important to sign and implement this contract, the construction of the four corvettes, which are extremely important within Romania’s strategic device at the Black Sea.

We appreciate the interest in participating in the endowment program, but of course, there are competitive procedures in many of the endowment programs in which the quality of the offer counts and the decisions are made based on these offers submitted”, Ludovic Orban also stated.

The Minister of Agriculture, Adrian Oros, specified that he discussed with his French counterpart, among others, about the Common Agricultural Policy and the Green Deal.

„At the meeting with my French counterpart, I addressed two sets of issues. The first referred to the negotiations on the new Common Agricultural Policy (CAP), the new strategic program that each country is now drawing up and the way we integrate the Commission’s strategies on biodiversity, the „farm to fork” strategy and the Green Deal.

We have some priorities where France can help us, namely, we want to strengthen the family farm. France has a long tradition. We agreed to use this very good experience, as well as a collaboration on technical education and agricultural research.

Tomorrow, two of my colleagues, secretaries of state, will come to France, because we want to develop a network of warehouses with Romanian products, similar to the French system,” he stated.

Ludovic Orban: Personal attack against President Macron is not acceptable

Prime Minister Orban said on Monday in Paris that he assured his French counterpart, Jean Castex, of Romania’s compassion and solidarity, after the assassination of Professor Samuel Paty by a terrorist.

Ludovic Orban said personal attacks, such as that launched by Turkish leader Recep Erdogan against French President Emmanuel Macron, are not acceptable and crisis moments must be overcome through dialogue.

„I wish good luck to my counterpart. We assured Prime Minister Castex of all our compassion and solidarity after the assassination of Professor Samuel Paty by a terrorist.

Romania and France are united. We expressed our solidarity with France in respecting our fundamental values ​​and the importance of a space in which freedom of expression and conscience is protected from violence and censorship.

Personal attacks targeting a head of state such as that recently subjected to President Emmanuel Macron are not acceptable from our point of view. Mutual respect between partners and allies is essential and differences of approach or crisis moments must be overcome through constructive dialogue and mutual respect,” said Ludovic Orban in his speech when welcomed by Prime Minister of France.