A table: Distressing image of Romanian agriculture. Few and poor farms: a comparison with Europe 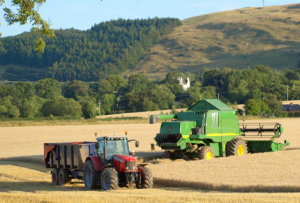 The ratio between the standard income obtained by a farm from the Netherlands and a farm from Romania is 92 to 1, according to the Eurostat data. They would have an average of 303,760 euros, while we would have only 3,303 euros.

The explanation is simple and devastating for the gap that we should recover. In their case, the fifth of the agricultural production from the poorest farms is at an average of 87,451 euros per year, while in our case it is a tiny amount of 856 euros because production is primarily intended for self-consumption and not for the market.

Below, a report about the relationship between large and small farms, valid for 2015: 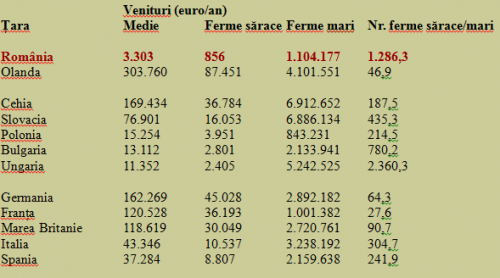 Property fragmentation has played the key role. Romania holds slightly more than a third of the number of farms from the EU (33.5%), followed at a big distance by Poland (13.2%).

Classification of farms according to Eurostat:

Classification of farms into five categories by the economic volume (value of annual production, in euros):

Classification into small and large farms by the total revenue obtained.

Classification of farms into four categories by the size (area in hectares):

Poor structure of farms by surface

Small and very small farms (under 20 hectares) represent over 95% in five EU member states. Along with us (it was expected to fall in this category), in the same category we find Slovenia, Malta, Greece and Cyprus, but when they make a more detailed analysis, Eurostat records that more than half of the very small farms (less than 2 hectares) are in Romania, 54.4% respectively.

Obviously, at the other end, we are among the seven EU member states (along with the same above mentioned countries, plus Croatia and Poland) where the number of large farms is less than 1% of the total. To get the picture of the distance that separates us from the developed West, we mention that this number exceeds 20% of the total in four states (the UK, Luxembourg, France and Denmark).

Moreover, farms with areas larger than 100 hectares cumulated, in 2013, 52.1% of the EU utilised agricultural land, following a quite clear process of concentration (they represented only 45.2% in 2005). This matter also concerns the former socialist countries, including the Czech Republic that became the leader in terms of average size of the farm in the EU, with 133 hectares, surpassing the UK (only 93.6 hectares).

Here we find the key to the effective shift from feudalism, with the society characterized by the majority of self-consumption, without extensive relationships of the employed and taxed workforce, and capitalism, in which what matters is production for the market with the work of employees like those from industrial enterprises.

And here we find the model to follow for Romania. The countries that have changed the fastest their structure of agricultural production, took the model of industrial exploitation and headed toward the practice from the developed West are the Czech Republic and Slovakia, the only EU countries that have more than two-thirds of the agricultural workforce employed on the large farms.

Incidentally, in a manual of military geography from the third decade of the last century, Czechoslovakia was already presented as an industrial-agrarian economy and not the other way around. Along with Germany and Sweden, which shows that processes are slower at the historical level, but also settle. We went after 1989 all the way back where we were before, but apparently, that was not the best idea.

Therefore, it is no surprise that the countries from the Central Europe are more capitalist than us and have a higher work productivity at the national level. It might even appear the suspicion of what sets us apart from them and penalizes us both in terms of GDP / capita and revenues.

Accordingly, a relatively large number of people who are not integrated, but marginally into the market that subsists, not exists, economically speaking. If we calculate the national average of our „Czechs and Slovaks” from all the other economic sectors and the farmers lost in time on our homeland we might rapidly explain why we are at only three-quarters of the Czech-Slovak standard of living.

Hope comes from the dynamism that we can bring. Surprisingly, although it has one of the most aging workforces in agriculture, Romania has at the same time the highest proportion of managers under 35 working in large farms among the EU countries (57.3%, about six times more than the EU average!). It remains for the authorities to support the transformation of a major deficiency into a development opportunity.