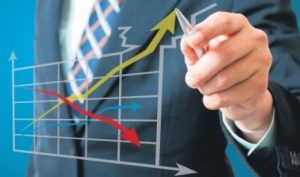 The purchasing power of wages reached the threshold of 180% in July 2017 compared to the reference set for October 1990 (last month before price liberalization). In the first half of this year, the average level reached an impressive 176.7%, from only 133.3% in the first half of 2015. It is an evolution that deserves a special attention to see if it is sustainable in time.

The discussion is about an increase in real terms of the net income earned by employees by nearly one-third over just two years (more precisely, 32.5%), THREE TIMES the cumulative level of GDP growth over the same timeframe. In this situation, paradoxically, the demands for wage increases are multiplying and becoming acuter instead of tempering on the rationales that „much will have more”.

Purchasing power is given by the ratio between the wage income growth index and the consumer price index. An increased purchasing power can only be obtained if these incomes grow faster than the prices of products and services purchased with the money earned from work.

We considered the first semester of each year following the EU accession because, in fact, decisions on economic policies related to the incomes, including and especially for the following year, were taken at about this time and based on the available statistical data according to standard procedures of information gathering, processing, and communication from the INS.

For those who have a slightly weaker memory, we remind that Romanians’ purchasing power, calculated as the average of the first semester, exceeded the threshold of 100% of the reference value set for October 1990 (the last month before the liberalization of prices) only after the EU accession.

At the same time, we also remind the episode at mid-2010 when the wage cuts, along with a five percent increase in the VAT, suddenly reduced the purchasing power of wages (from 123.7% in June 2010 to 114.9% in July 2010, which means minus eight percent month-on-month). It is worth remembering that the recovery came only four years later.

Once applied, they could not be reversed until 2010, and they cost us our IMF agreement and the doubling of the public debt. Respectively, we are still paying year after year about 1% of GDP (more than if we did not make the mistake of excessively increasing the wages) for the debt left since then (money with which we could access every year the EU funds and build highways and schools and hospitals, etc.).

Around 2013, GDP growth was about 40% compared to 1990 and the employees’ purchasing power about + 20%. It could be said that there is a reserve of additional income over the evolution of GDP (resulting from the transfer of the burden related to the emergence from the crisis almost exclusively to the employees but this is another subject). This reserve has been exhausted.

Gross Domestic Product grew in real terms between 1990 and 2016 by 58%, while wage purchasing power increased by 59% (monthly average of last year). That is, although we are under capitalist conditions, we returned to the correlation with the possibilities given by GDP form the socialist era (that is to stop blaming the excessive exploitation of labour, unless that was not done during those times as well, logically).

What we are doing now is to force, again (after the 2008 experience, from which it seems we have learned nothing) breaking the correlation between the economic result and the remuneration of those who obtain this result. With the mention that the balance tends to favour those who do not obtain it directly (employees in the public sector) or do not contribute to it at all, in the capacity they have (pensioners).

If we look to the line of the ten correlations between the purchasing power increase and the GDP growth, we can see that the situation is not as obviously shocking as in 2009. That is when they offered extra money (only + 6.4%!), based on the decisions taken in the second half of 2008, from where they could not be given and the economy started to decline sharply.

In 2015, the increase in purchasing power was higher (+ 6.8%) than in 2009 but we did not find ourselves in a global crisis. Purchasing power was maintained at a reasonable advance relative to the GDP growth, almost three percent, only because of the underpayment reserves accumulated during the crisis.

2016 has brought a lessening of that correlation between GDP and the purchasing power (this is the correct order, because you should first have and then give from what you have). In 2017, despite the 5.8 percent GDP advance (self-sustained by forcing consumption), we started to live dangerously, far beyond the „de-correlations” presented in the last column that reached the two-digit range in the first half of 2016.

They still gave then without seriously damaging the balances in the economy. Although pushing the budget deficit from -0.8% of GDP in 2015, when we met the mid-term target and were the brightest in our class, to minus 3% of GD, which placed us among the laggards of the class, with the actual perspective of flunking, it was not okay.

Just because the correlation between GDP and the purchasing power in 2016 has resumed at a sustained pace, we could not go without major risks on the same road in 2017. The purchasing power cannot simply grow for years at a pace triple to GDP, because it is not possible, mathematically speaking, and the risks of a later downfall are major (that is why the EU asked for urgent measures for balancing the public finances).

Still less excluded is the continuation of the carnival of wage increases in 2018. A year for which some measures of salary increases in the public sector have already been announced. Correction by inflation (including via the current account deficit and the exchange rate) and the cost of increasing country’s debt are already certain. God forbid that international conditions also become unfavourable.