Trade deficit, consolidated by negligence, reached EUR 1.3 billion. After only two months of 2017 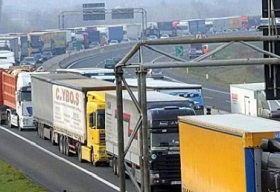 The trade deficit in the first two months of 2017 was EUR 1.259 million, 27% higher than the same period of the previous year, according to the INS data.

The import coverage ratio by exports still maintained a reasonable level (92.4%, same as at the end of January). That is more than the overall evolution registered in 2015 and 2016, which saves some hopes for a return in the coming months to better trade deficit values.

State of play of the foreign trade evolution between January 2016 – February 2017 is as follows: 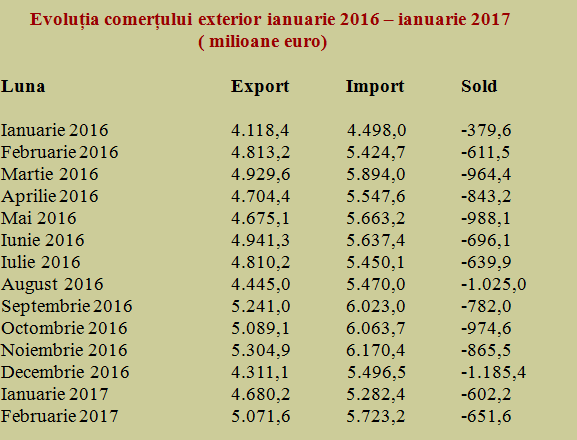 Trade exchanges with the EU countries were nearly seven and a half billion euros in exports (accounting for 76% of total exports) and a little more than EUR 8.3 billion in imports (75.6% of total imports, an increasing share compared to the previous month).

We emphasize that only two years ago, in February 2015, Romania (still) registered surpluses in the extra-Community trade. That suggests the necessity to better adapt the production to the emerging markets and the urgent need to find new markets outside the EU.

How foreign trade balance appears, by its structure

In terms of structure, Romania obtained a positive sector result only on the segment of machinery and transport equipment (+ EUR 0.31 billion), with trade values close to the segment of other manufactured products. Unfortunately, these results have been annulled and reversed in the chemicals and fuels sectors, where the import coverage ratios by exports reached damage levels (29%, respectively 43%).

Foreign trade of chemicals, a sector affected by the closure of production capacities, have been seriously deficient and generated five-sixths of the total trade deficit. Also, in the fuel and lubricants segment, we have not even covered half of the imports by exports, despite the natural resources at our disposal.

Furthermore, trade ratios have deteriorated compared to the last year in the segment of food, beverages and tobacco products (another group where we should have made use of the advantages of resources), which had only 75% coverage and generated about a fifth of the overall trade deficit.

Altogether, Romanian decision makers should have come up with solutions to reduce the chronic deficits in the petrochemicals segment and remove the bizarre minus registered in the food products segment, rather than provide wage increases from volatile sources. Also, to encourage the development of the industrial production, on the infrastructure side, the segment that supports the national currency, by the amounts of the foreign currency received.