The highest economic growth in the EU: sources and, especially, risks 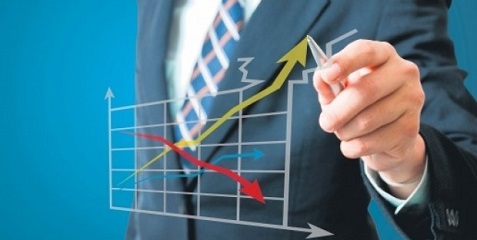 We start from the certainties in 2016 – when Romania will most likely have the highest economic growth among the EU states:

First, we briefly present below the comparative results of the last two years of the Romanian economy based on the latest official calculations:

The data illustrate a worrying component of artificial GDP growth, beyond the sustainable rate at a time of macroeconomic balance. Artificial growth created by the excessive increase of consumption and exacerbated by tax reduction.

Increased consumption, in contrast with a decrease of productivity

In the first half of 2016, total turnover of the retail trade activity (except of motor vehicles and motorcycles) increased by 18%, compared to the same period of the last year. Under the combined effect of the revenue growth and the reduced VAT, the group of food products, drinks and tobacco goods had the highest growth, of 24.1%.

The non-food product category was close to the general average, with 16.4%, while the fuel sales went up by 11.4%. These rates that are very high compared to the GDP growth, have no correspondence in the labour productivity growth. It would be great if the standard of living resulting from what people buy extra, year to year, increased by three and a half times faster than the growth rate of the economy.

Unfortunately, the situation is circumstantial and cannot be maintained on long term. Otherwise, against all reason, if the annual GDP growth was of 5% in all the coming years, we would reach in 2020 the same purchasing power as the Germans or the French.

In fact, prosperity growth is much exaggerated, disappointing, in relation to the results from the real economy, both in level and direction of evolution.

The height of statistical procedures is that the massive increase of consumption and the successive increases of public sector wages artificially inflates the GDP. The valve is increasingly clearly in the deficits. The budget deficit started the trend back toward the danger zone of 3% of GDP and the current account deficit will go over the recommended 4% of GDP.

This consumerist spiral will inevitably end with painful adjustments and restoring the macroeconomic balance at a lower level. The signs of overheating the economy, which is just moving from the demand deficit to surplus, are increasingly numerous.

Wage increases from the public sector led to an increase of the nominal GDP by almost nine billion lei (from 29.4 billion lei, to 38.2 billion lei, i.e. almost 30%!).

Overall, the statistical effect of this „economic doping with budgetary hormones” was of + 0.4%. That is identical to what was obtained in the industry, but the significance in terms of growth quality is totally different.

Worse is that after the electoral gifts recently offered by the Parliament, repeating this manoeuvre is looming for 2017.

Noteworthy: in contrast to the decrease of the consumer price index (CPI) for households, the increase of the price indices across all sectors of the economy, except for agriculture, the sector with the lowest GDP contribution.

The explanation for the average of only 1.2% which was the GDP deflator (it implicitly adjusted the result of the current prices by little more than one percent) only stands in the strong, circumstantial decrease of the price index in terms of taxation (-16.6 %, a value that contributed to the overall growth of real GDP and the CPI decrease). 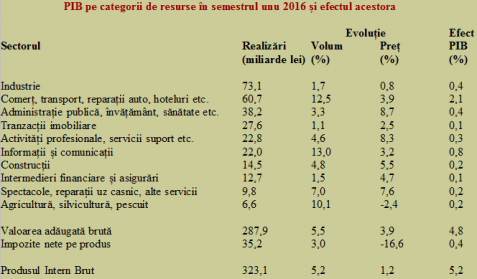 Regarding the use of GDP, it is easy to notice the increase of household consumption beyond the possibilities offered by the economic growth and well above the solid base of reference given by the industrial activity segment (6.8% over 5.2% and well above 1.7%).

The result was the quite strong negative effect from the foreign trade, which had an impact on the total negative result by almost three percent, even after the consumption from the previously established domestic stocks. 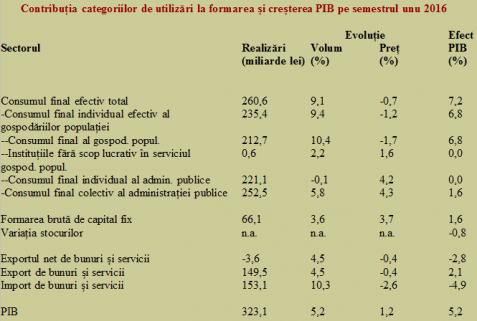 Altogether, the INS data confirms the situation reflecting a good amount at a poor-quality economic growth; a growth underlying the electoral promises, drawing on the infamous example of 2008.

It remains to be seen how to improve the growth quality (read the budget balance and the external deficit) – through productivity and / or increased taxes or speeding down to not cutting out the engine of domestic demand.

Where the rupture in the economic fabric can inevitably be seen

The balance of payments current account had a deficit of EUR 2.507 billion in the first half of this year, outcome that is almost seven times weaker than the EUR -374 million registered in the same period of 2015. This poor performance occurs against the background of the economic advance of 5%, which confirms the internal consumption as the single driver for increase.

Against the background of the more than 15% increase of household incomes, the trade deficit of goods has worsened by almost 40%, exceeding four billion of euro.

For now, the rescue came from the services segment that had a slightly improved situation compared to the previous year which restored the balance with EUR 3.34 billion.

Noteworthy is the change occurring in the primary income segment (mainly income from direct and portfolio investment made earlier, that is recovering the money brought into the country as profits transferred to abroad), with the negative balance increased by 56% compared with the same period of 2015.

Overall, by forcing the economic growth based on an exacerbated domestic consumption and the related import growth effect, the current account for this year registered a minus 1.5% of the GDP estimated for the first half of the year. That is a much too high compared to official estimates from the beginning of the year (-1.6% of GDP for the whole year).

For now, the total external debt continued to decline and reached EUR 88.26 billion, while the total debt service for the first six months was of EUR 26.94 billion. A warning must be launched though – the financial situation seems to have reached a turning point and slightly worsened in terms of external debt on the short term, which rose to EUR 19.35 billion.

And the effects: The adjustment following the elections

Overall, the domestic economy announced a high GDP increase (statistically amplified by the money supplement offered following the tax cuts) but it cannot keep up with the increasing of incomes neither in terms of production, nor in productivity.

These affects translated into the strong increase of the budget deficit and the expansion of the negative balance of payments, both having the potential to exceed the maximum levels agreed at the European level for ensuring the financial stability.

The expansion of deficits beyond these allowed limits will occur right after the euphoria of the electoral campaign will end and we will have to adjust consumption to the real possibilities offered by domestic production.

2017 promises to be a year of adjustment in terms of domestic demand, which will maintain though in excess. Costs for population are difficult to anticipate, but they will be significant, depending also on the international context. 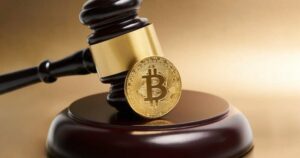