According to the data communicated by the NIS, in January 2020, Romania registered a new decrease in monthly industrial production, by -2.4% in gross series… END_OF_DOCUMENT_TOKEN_TO_BE_REPLACED

Dacia-Renault presented its “show car” Dacia Spring, “which prefigures the first 100% electric model of this brand” and will enter series production in 2021, according… END_OF_DOCUMENT_TOKEN_TO_BE_REPLACED

With current data and based on the legislation already adopted, Romania’s public debt is forecasted to reach 91.2% of GDP, according to the analysis of… END_OF_DOCUMENT_TOKEN_TO_BE_REPLACED

The progress in the development of Romanian infrastructure networks of utilities and roads is too slow compared to the needs and our neighbours’ progress, as… END_OF_DOCUMENT_TOKEN_TO_BE_REPLACED

The only state with all contributions charged to employees: Purchasing power of minimum gross wage leaves 10 states behind 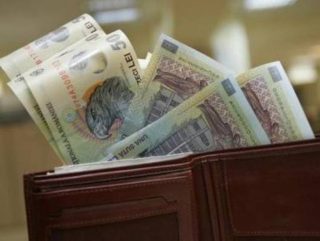 Following the systematic increases in recent years and the transfer of contributions from the employer to the employee, Romania has surpassed Lithuania in terms of minimum gross wage and went up to the 18th position out of 28 EU states in terms of its purchasing power, if the value is adjusted to local prices.

According to the data published by Eurostat, in January we have reached a minimum gross salary of EUR 408, compared to EUR 261 in Bulgaria and EUR 400 in Lithuania.

Minimum wages in the EU, 2018: Attention – Romania is the only EU state with all contributions paid from gross wage

Among the group of Western developed countries in the northern part of the continent and the group of former socialist countries that joined the European Union, there is a group of five states in the southern flank where the minimum wage ranges between almost EUR 700 and EUR 900 per month: Portugal (EUR 677), Greece (EUR 684), Malta (EUR 748), Slovenia (EUR 843, the big exception of the eastern bloc) and Spain (EUR 859).

If we adjust to the price level in each country, we obtain the purchasing power of each gross minimum wage mentioned above at the standard purchasing power parity (abbreviated PPS), which means the equivalent level of this salary related to the EU average prices.

Based on this approach, which allows the comparability in terms of living standards offered by the minimum wage, Romania goes up on the 18th position.

Attention! It should be mentioned that this is about the GROSS value of the salary and we are the only country in the EU where almost all contributions paid to the state are deducted from this gross wage and reduce the net more than in other legislation.

However, if we look from the Eurostat’s perspective, Romania leaves behind the group of countries with the lowest minimum wages, below the EUR 750 threshold (Bulgaria, the Baltic countries, the Czech Republic, Slovakia, Croatia and Hungary) and goes up to group 2, between Portugal and Greece, close to the trio of Poland, Malta and Spain.

It is worth noting that Slovenia has already approached group 3, the countries with the highest minimum wages in terms of purchasing power. Also, Belgium takes the leader chair (we ignore the special situation in Luxembourg) based on slightly lower prices than in Germany, the Netherlands or France.

The same prices that compress the gap at the European level from almost 8 to 1 in euros to only 3 to 1 when it comes to the actual purchasing power (the Luxemburg – Bulgaria score drops dramatically from EUR 1,999 – EUR 261 to just EUR 1,597 – EUR 546 in PPS terms). 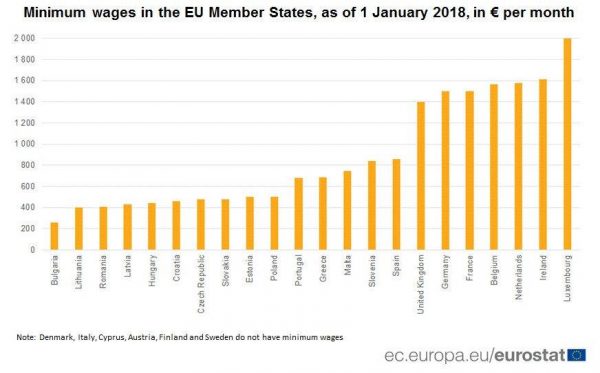 Unfortunately, one of the obvious effects of this statistical compression is the solution found by a large part of the workforce from the eastern and southern part of the continent if these people have the possibility and want to support their families: to earn however less money in the West but spend it as much as possible at home.

That, along with the low birth rate based on the Western cultural model and the many problems in public services, explains the relatively high depopulation rate of the poorest countries in the EU, Bulgaria and Romania. As well as the amounts sent home, which in turn, also bring the unfavourable effect on the quantity and quality of the local workforce, even in the case of a consistent increase in the minimum wage.

Finally, let’s see how the national minimum wage in Romania has rapidly grown in recent years but still with little effect on preserving the workforce (and, an acute phenomenon, on finding new employees for the developing businesses). A wage that reached over 45% of the national average pay forecasted for this year and covers (officially) almost half of the workforce.

Evolution of the national minimum wage in Romania

Romania imported an amount of electricity of almost 796 GWh in the first month of this year, by more than 36% above what it exported… END_OF_DOCUMENT_TOKEN_TO_BE_REPLACED

GFG Alliance has committed to invest one billion euros to upgrade Galati steel plant in order to reduce emissions and increase production. Another EUR 1… END_OF_DOCUMENT_TOKEN_TO_BE_REPLACED

The Transport Ministry, as the Intermediate Body in Transport, approved the financing request for the project "Construction of Sibiu - Pitesti highway", Sections 1, 4… END_OF_DOCUMENT_TOKEN_TO_BE_REPLACED

Lack of trust in authorities, corruption and low living standards are the main reasons why young people leave Romania. The data is part of a… END_OF_DOCUMENT_TOKEN_TO_BE_REPLACED

Romania is the EU country with the fewest cars in terms of the number of inhabitants, according to data recently published by Eurostat. We appear… END_OF_DOCUMENT_TOKEN_TO_BE_REPLACED

The Government is preparing the public for the first measures aimed at avoiding the budget slippage, which would be applied by the PSD-ALDE government. News… END_OF_DOCUMENT_TOKEN_TO_BE_REPLACED

French Prosecutor Jean-Francois Bohnert will be appointed as head of the European Financial Prosecutor's Office, a position for which he was heard on Thursday, 11… END_OF_DOCUMENT_TOKEN_TO_BE_REPLACED

Romania recorded the highest road deaths in the EU also last year, with 96 deaths per one million inhabitants in 2018, almost double the EU… END_OF_DOCUMENT_TOKEN_TO_BE_REPLACED

Sorina Pintea announced on Thursday further new changes that will be brought to the functioning of the health care system, including new rules for employment… END_OF_DOCUMENT_TOKEN_TO_BE_REPLACED

The new order on approval and selection procedures for insolvency practitioners is an important step to a very good direction, industry experts say. ANAF is… END_OF_DOCUMENT_TOKEN_TO_BE_REPLACED

Romania lost to Estonia in the final vote to get the non-permanent member position within the UN Security Council for the period 2020-2021. On Friday,… END_OF_DOCUMENT_TOKEN_TO_BE_REPLACED

eMAG hopes to get the opinion of the Hungarian Competition Council over the next two months for the acquisition of Extreme Digital, the market leader… END_OF_DOCUMENT_TOKEN_TO_BE_REPLACED