Romania’s trade relationship with the Eurozone: a comparative analysis with Poland, the Czech Republic, Hungary 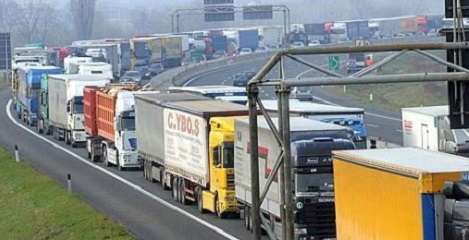 Romania ranks 15th among the trade partners of the Eurozone, far behind other countries that were part of the Eastern bloc, such as Poland (4th), the Czech Republic (6th) and Hungary (10th). The degree of integration into the space of circulation for the single currency will play a decisive role in the decision to join the Eurozone, beyond the imposed Maastricht convergence criteria.

Under the same managed float regime of the national currency as we are, the three Central European countries mentioned above form a compact block with the same significance for the Eurozone trade as the US or the UK.

However, it is noteworthy that unlike them, this trade relationship is almost balanced, as the Czech Republic accomplishes to have a substantial surplus compared to the Eurozone, namely EUR 13.6 billion. Even Hungary also scored a small surplus last year, so Poland’s deficit of 15.8 billion was almost completely covered. 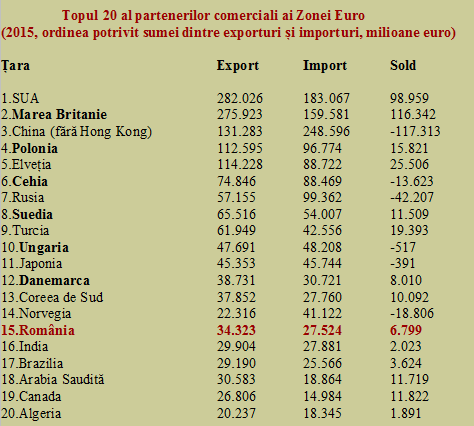 Note: marked countries are EU members, of which the UK and Denmark were exempted by the accession treaties from the adoption of the euro and Sweden adopted de facto a similar position. Croatia and Bulgaria are too small economies to appear among the Eurozone’s top interests.

As a market for the products from the Eurozone, Romania ranks right 14th, surpassing richer countries like Norway and countries with a more numerous population, such as India or Brazil. Mid-term perspective is that we also go up to the 12th position, ahead of Norway, South Korea and Denmark.

On the imports made by Eurozone, we are worse than in the overall ranking, because we rank 17th, ahead of Brazil but very close to India and South Korea. Surprisingly somehow, Romania exports to countries from the Eurozone almost two times more than Canada, country with which the EU has recently signed a free trade treaty.

A potential accession of the Poland-Czech Republic-Hungary trio to the Eurozone would quickly bring us to the top ten trade partners of the EU, not only due to the positions in the ranking that remain available, but also the quite consistent trade of these countries with Romania. Only that we would end up with a considerably increased deficit to the Eurozone because of the very low degrees of import coverage by exports to these countries, around 50%.

The Polish model with the Czech or Hungarian efficiency

Romania has an arrangement of results against the countries that use the single currency very close to Poland, respectively a degree of import coverage by exports of 80% (Poland has 86%) and a deficit in proportion to the size of the economy (we have a deficit of about 7 billion with the Eurozone, theirs is around EUR16 billion).

There is a reason why we should follow carefully how Poland plays the card of the Eurozone accession. An undertaking from which the country withdrew at the time of the crisis and is now waiting to see what conditions would be advantageous to join, even if it meets (as we are, by the way) the convergence criteria and 13 of the 14 criteria of the macroeconomic scoreboard.

The major difference between Poland on the one hand, and the Czech Republic and Hungary, on the other hand, lies in the totally different degree of integration into the Eurozone market. If we calculate the ratio of trade to GDP for each of them, we obtain a level of about 49% for Poland (we have 39%), compared to 87% for Hungary and 98% for the Czech Republic.

The country size makes the difference. As Poland already competes with Sweden as a complete force (GDP of EUR430 billion them and EUR 445 billion in 2015 the Swedes), we are already near the Czechs (EUR160 billion us, EUR167 billion them); with Hungary being far behind to only EUR110 billion (equivalent to Japan trade with the Eurozone), to have a clearer picture of the Romania’s position in the region.

In short, all these data suggest that before adopting the single currency, we should increase our integration into the Eurozone following the Polish model but having a higher competitiveness, if not the Czech, at least the Hungarian one. For that, the emphasis put now on the domestic demand should be moved outwards and the economy redirected more towards the export that allowed us to exit the crisis.