Romanians’ actual individual consumption –  at 63% of EU average. Eurostat says we have surpassed Croatia and caught up with Hungary 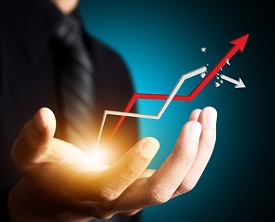 Our country has caught up with Hungary, surpassed Croatia and registered the highest increase of this indicator in the last four years. Contrary to the public perception, which calls for a further substantial increase in incomes, the advance between 2013 and 2016 was not less than nine percentage points.

GDP per capita vs. AIC

The actual individual consumption (abbreviated to AIC in English) reflects more accurately the well-being of a citizen in a country than Gross Domestic Product per capita. The latter is based on the goods and services purchased and paid by a household.

Instead, AIC is calculated based on the goods and services actually consumed by individuals, without taking into account that they have been contracted and paid by households, governments or non-profit organizations. It is therefore preferable for international comparisons and better reflects the standard of living.

The differences result from the fact that the share of payments made directly by households for important services, such as healthcare and education, considerably varies from one country to another. The apparent ranking of countries by living standard, which would result from the comparison of the classic GDP/capita, may undergo important changes.

Evolution of European ranking between 2013 and 2016

Here are the values from 2013 to 2016, to see the developments in the last four years analysed by Eurostat and what significant changes have occurred in the positions of different states. Romania is clearly distinguished by the spectacular evolution of incomes measured by the actual individual consumption. 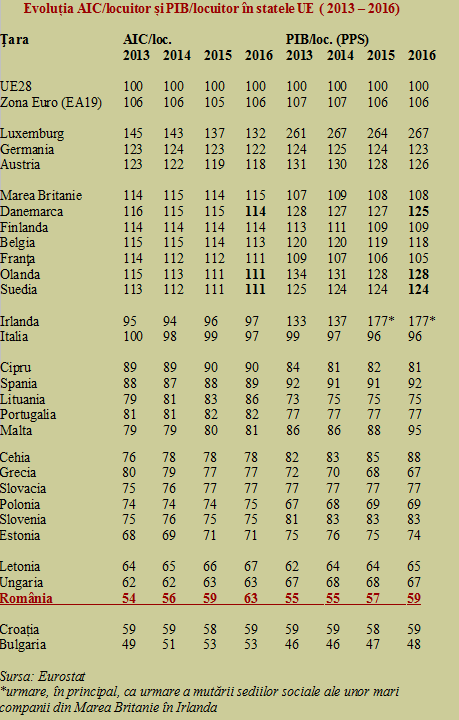 The largest differences between the AIC and GDP per capita at the EU level (but, carefully, all negative) are noticed in the Netherlands, Denmark and Sweden. Ireland is in the special situation of some circumstantial statistical reporting because of the relocation of large companies, and Luxembourg is a special case due to the influx of workers from neighbouring countries.

Italy, Romania’s second largest trade partner, is the closest country to the EU average by both indicators of living standards. It is more closely to the reference for our real convergence process. It is at a considerable distance from the group of Northern Western countries and is closer to the Latin sisters Spain and Portugal.

In the 2016 ranking by AIC, the podium is occupied by German-speaking countries, with Luxembourg in a far position at 132%, but in a high loss of speed (145% of the EU average four years ago) and Germany and Austria above the 120% threshold, about double compared to us. There follows a compact block of seven states with values between 111% and 115%.

Among the former members of theEasternn bloc, Lithuania has become the most advanced in terms of AIC. Somewhat discreetly, she has reached 86%, surpassing Portugal and approaching Spain. The Czech Republic and Slovakia have already surpassed Greece, to which Slovenia and Poland are now close.

The major difference between GDP and AIC can be seen in a school comparison. Poland and Hungary are in the Eurostat statistics with almost the same level of GDP per capita (69% to 67%). However, in terms of effective living standards, Poles appear far above Hungarians, with 75% of the EU average, compared to only 63% of the EU average.

Now, almost two decades after the 1997 crisis and the threat of default, it is seen that the decision to sustain a floating exchange rate for the Romanian leu instead of the recommended (at that time) currency board and a fixed exchange rate against the euro, which our EU accession wave colleagues from the south of the Danube accepted, was correct.

As we have previously anticipated, the benefits granted in 2016, perhaps even above the possibilities that were strictly derived from the GDP/capita, have led us well beyond the 60% threshold in terms of AIC, even before the GDP to reaches that share.

The question remains whether the standard of living can be maintained based on the Polish model (to which we have constantly referred) at four to five percentage points above the GDP/capita that is already one step below the theoretically recommended minimum threshold (60% of the average EU) for the adoption of the euro.

The key would be the combination between price stability and exchange rate stability, which we do not have much room left to test through an excessive increase of incomes.