The transition to a green economy needs to be supported by new, additional European funds, distinct from Romania’s allocations from the future EU multiannual budget.… END_OF_DOCUMENT_TOKEN_TO_BE_REPLACED

Romania fell 3 places to the 10th position in the ranking of largest investments made by the European Bank for Reconstruction and Development (EBRD), after… END_OF_DOCUMENT_TOKEN_TO_BE_REPLACED

The Transport Ministry, as the Intermediate Body in Transport, approved the financing request for the project “Construction of Sibiu – Pitesti highway”, Sections 1, 4… END_OF_DOCUMENT_TOKEN_TO_BE_REPLACED

Lack of trust in authorities, corruption and low living standards are the main reasons why young people leave Romania. The data is part of a… END_OF_DOCUMENT_TOKEN_TO_BE_REPLACED 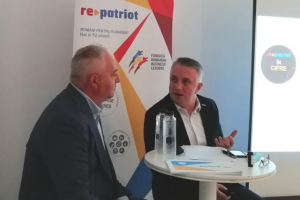 Migration is one of the most serious problems facing Romania at this time, along with the lack of infrastructure. However, the return of Romanians to the country could bring a wealth of civic knowledge to change mentalities, said Felix Patrascanu, founder of FAN Courier, during a press conference organized by the Romanian Business Leaders Foundation (RBL).

According to some information presented at the event, a study by the United Nations shows that 3.4 million Romanians left the country between 2007 and 2017, accounting for 17% of the country’s population.

The leaders of RePatriot team, the project of repatriation through entrepreneurship addressed Romanians from Diaspora, launched by the Romanian Business Leaders Foundation, have proposed the topics below for discussion:

“The exodus is one of Romania’s biggest problems. The problem is no longer just that a part of Romanians have left, but that they are still leaving, the rhythm of departures does not decline, the rhythm of return. The rhythm of home returning is rather low, and statistics and forecasts look pretty bad. Somehow this issue is ignored, but the opportunity is ignored. Where there is a problem, the opportunity usually also appears. This is completely ignored by the administration, the Government. These millions of Romanians are a wealth. If we assess their knowledge, the expertise gained in the other countries, not only the financial aspect, the money sent, we see that they are Romania’s greatest wealth,” said Marius Bostan, the RePatriot initiator.

According to him, Romanian Business Leaders believe that the lack of workforce and the workforce crisis is Romania’s most important problem.

In his turn, Felix Patrascanu, co-founder of FAN Courier, claims that while the way out of the economic crisis was relatively easy, the workforce crisis is worse.

“It is an annoying crisis and much more serious than the economic one. While we went through the economic crisis with lower a growth rhythm, we have a serious problem at the moment. In the western part of the country, Romanians are massively leaving abroad. We thought that Brexit would be a barrier for them at some point. No, on the contrary, and Romanians have become the second nation in the UK at the moment. The economic crisis can last 2, 3, 5 years, after which you recover, but the depopulation of Romania is very serious,” Patrascanu said.

Marius Bostan said that RePatriot calls on the public administration to turn its attention to this resource, and a letter was written in this respect.

“You cannot have a local development strategy without taking into account a resource or the opportunity, which is life. Take a look at all the local development strategies, 99% of them ignoring Romania’s largest resource (editor’s note, the population). It is as if it does not exist, as if there is no Romanian lung. We give them some ideas and, at the same time, we offer them our willingness to provide support by knowledge, expertise, promoting localities and what they do about life. If these representatives of local administration are interested, understand what we write and read the 3-4 pages can open a remarkable project on the occasion of the 100th anniversary, a remarkable Centenary project,” says Marius Bostan.

The Transport Ministry, as the Intermediate Body in Transport, approved the financing request for the project "Construction of Sibiu - Pitesti highway", Sections 1, 4… END_OF_DOCUMENT_TOKEN_TO_BE_REPLACED

Lack of trust in authorities, corruption and low living standards are the main reasons why young people leave Romania. The data is part of a… END_OF_DOCUMENT_TOKEN_TO_BE_REPLACED

Romania is the EU country with the fewest cars in terms of the number of inhabitants, according to data recently published by Eurostat. We appear… END_OF_DOCUMENT_TOKEN_TO_BE_REPLACED

The Government is preparing the public for the first measures aimed at avoiding the budget slippage, which would be applied by the PSD-ALDE government. News… END_OF_DOCUMENT_TOKEN_TO_BE_REPLACED

French Prosecutor Jean-Francois Bohnert will be appointed as head of the European Financial Prosecutor's Office, a position for which he was heard on Thursday, 11… END_OF_DOCUMENT_TOKEN_TO_BE_REPLACED

Romania recorded the highest road deaths in the EU also last year, with 96 deaths per one million inhabitants in 2018, almost double the EU… END_OF_DOCUMENT_TOKEN_TO_BE_REPLACED

Sorina Pintea announced on Thursday further new changes that will be brought to the functioning of the health care system, including new rules for employment… END_OF_DOCUMENT_TOKEN_TO_BE_REPLACED

The new order on approval and selection procedures for insolvency practitioners is an important step to a very good direction, industry experts say. ANAF is… END_OF_DOCUMENT_TOKEN_TO_BE_REPLACED

Romania lost to Estonia in the final vote to get the non-permanent member position within the UN Security Council for the period 2020-2021. On Friday,… END_OF_DOCUMENT_TOKEN_TO_BE_REPLACED

eMAG hopes to get the opinion of the Hungarian Competition Council over the next two months for the acquisition of Extreme Digital, the market leader… END_OF_DOCUMENT_TOKEN_TO_BE_REPLACED