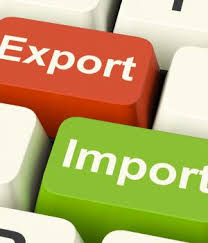 The trade deficit for the first quarter of 2017 was EUR 2.32 billion, 18% higher than in the same period of the previous year, according to the INS data.

The imports coverage ratio by exports decreased since the beginning of this year to 90.7% but remains above the values registered for 2015 and 2016.

Unfortunately, the monthly foreign trade deficit increased again in March over the EUR 1 billion threshold, attained only in two of the last 15 months.

State of play of the foreign trade evolution between January 2016 and February 2017 is as follows: 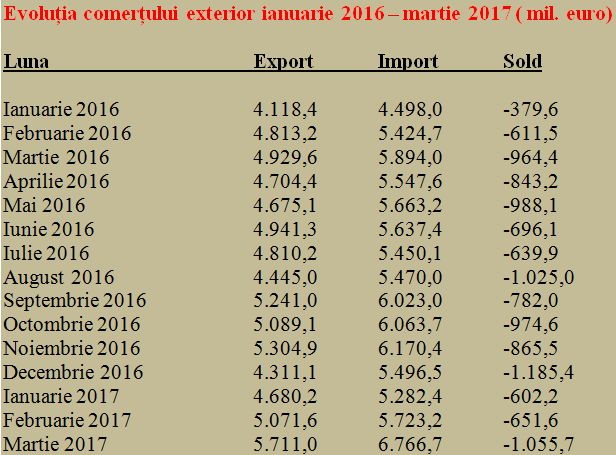 Worth being taken into account as an important evolution in the structure of Romania’s foreign trade deficit, the share of the intra-EU trade in the total deficit dropped from about 90% last year to only 75% in the first three months of 2017, while the deficit rate increased on the extra-community trade segment, from about 10% last year to 25% in the first quarter of this year.

In terms of structure, Romania achieved a positive sectoral result only on the machinery and transport equipment segment (+EUR 0.83 billion), where the imports coverage ratio by exports was 113%. This figure is declining though since the beginning of this year, as did the share of this sectoral surplus in the total deficit (from 48% at the end of the previous month to only 36% in the first quarter).

The deficit on the segment of raw materials is less significant and it would not even be a problem if we imported more raw materials than exported, to obtain more added value by using them in the country.

Last, but not least, it should be emphasized that the slight devaluation of the national currency against the euro did not help reduce the trade deficit by increasing price competitiveness. The average exchange rate in the first quarter of 2017 was 4.52 lei/euro compared to 4.49 lei/euro in the first quarter of 2016, but the result was an increase of more than one-sixth of the trade deficit.