Lost opportunities: Romanian companies have not capitalized on years with low interest rates. Neither did banks. Causes 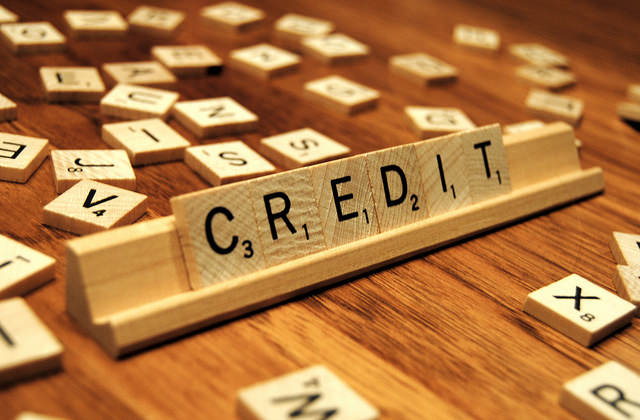 They considered this opportunity only in the second half of 2016, that is, when it began to fade out.

The revival of the credit appetite occurred, though, as the window of opportunity closed off considerably since September 2017, that is, since the market triggered a new monetary cycle, marked by the new increase trend in interest rates.

The interest rates market returned in 2010 to the levels registered in the pre-crisis period and stabilized over the following three and a half years within a range between 9 and 10 percent, average interest rate on new loans, according to data from the National Bank of Romania (BNR).

The interval of the interest rate stabilization, although relatively broad, confirms the notable decrease in its volatility compared to the first years of the crisis. 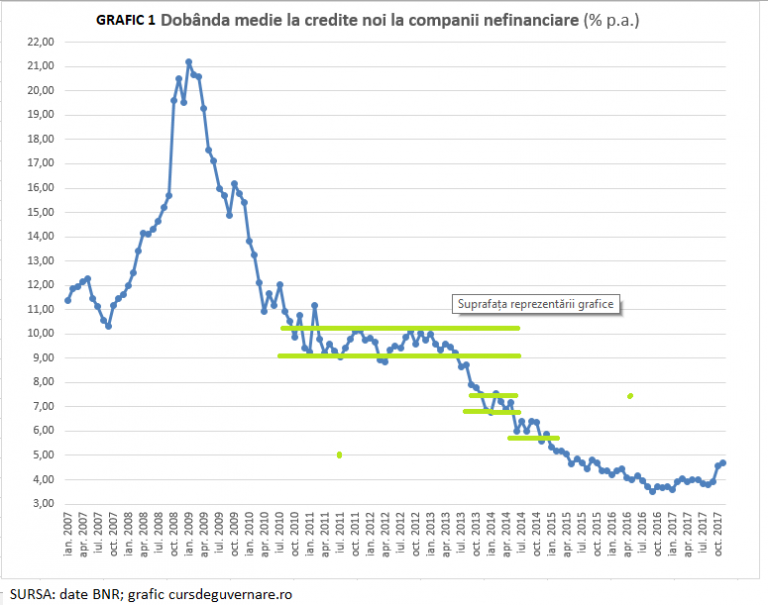 The evolution of the market of the interest rates on new loans also justified the increase of the total balance of credits for non-financial companies from RON 98 billion in March 2010 to the historical maximum of September 2012 (RON 121.8 billion, in equivalent).

However, the opportunity from the period 2011-2013 was only partly used. The increase in the volume of credits was the effect of the steps taken to recover the damage caused by the crisis, of restructuring and refinancing older loans, rather than the return of the appetite for financing development.

Thus, most of the loans in lei were on terms shorter than one year. Also, about one-third of total loans in foreign currencies were for less than one year.

In addition, much of the 2012 record balance was also represented by the volume of non-performing loans (included in the BNR statistics). Cleaning up balance sheets by selling them speeded up only in the years that followed, when the volume of corporate loans granted also declined to 99 billion in August 2016.

The downward trend in interest rates was, though, as uncertain as it was less seized, as the corporate credit balance declined instead of rising, as can be seen in Figure 2.

When the interest reached the historic minimum level of 3.51%, in September 2016, the balance of credits was RON 99.9 billion, very close to the minimum level of the last six years, registered one month before. 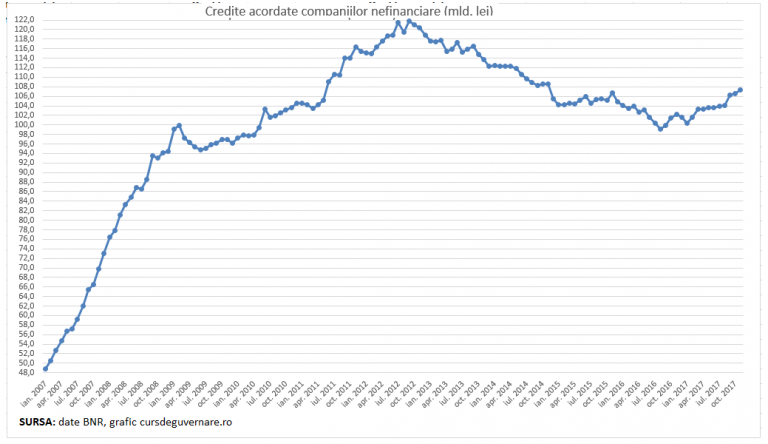 It is true, also at that time, banks made a remarkable progress in clearing up balances of bad credit.

The balance of credits granted to companies started to rise only in September 2016, the month when – ironically or not – the inter-bank borrowing rates burst, as the government’s need for money removed the liquidity from the market.

There is also an official certainty: the era of low interest rates is over, and the balance of corporate loans reached only RON 107.3 billion in November 2017, which is only at the level of June 2011 (RON 109 billion).

Why did Romanian companies fail to take advantage of low interest rates?

The interest rate leap of the last quarter of 2017 was aggressive enough to make BNR feel the need to assess the resilience of the economic environment to shocks.

„Preliminary estimates show that the rate of non-performing loans would increase from the current figure of 15.8% to 18.7% in the hypothesis of a 200 basis point interest rate shock,” says the latest BNR report on the financial stability.

However, BNR analysis has identified a lending potential of about RON 113 billion, not used by the approximately 14,300 companies, which could have been qualified according to banks’ regulations and offers, as shown in the latest data of June 2017.

„More than two-thirds of the additional financing may be absorbed by the private sector (69%), while the rest by state-owned companies. Most important amounts could be directed to fields of activity such as manufacturing (26.3%) or services (14.2%) „, says the report on Romania’s financial stability, published by BNR in December.

Statistically speaking, many of the Romanian companies do not even qualify for loans. That is, they are not bankable, and the first argument from the list of “cons” is that they already have negative own equity. In other words, they already have debts higher than their own funds, including the equity.

On the other hand, neither do the banks try too much to gain too many corporate clients.

On the contrary, banks are happy either with the flow from large multinationals (who do not even need loans from one point forward, because their activity is a big cash-generator) or financing the state.

The sub-capitalization is mainly caused by losses (over 217,000 companies registered losses of RON 33 billion in 2016) and the high indebtedness in certain sectors;

On the other hand, banks’ lack of interest in attracting and maintaining corporate clients is large enough to trigger specific comments from the BNR Governor.

Mugur Isarescu urged banks, several times over the past year, to pay more attention to the financial education of their clients.