The intergovernmental agreement between the United States and Romania in the nuclear-civil cooperation field has received the European Commission’s approval, and Romania will start construction… END_OF_DOCUMENT_TOKEN_TO_BE_REPLACED

A system which can save Romania from the packages waste and, at the same time, can ensure fulfillment of obligations in the field towards the… END_OF_DOCUMENT_TOKEN_TO_BE_REPLACED

Romanian Leu was much more stable during the pandemic than the currencies of Central European countries with a similar exchange rate regime, the Czech Republic,… END_OF_DOCUMENT_TOKEN_TO_BE_REPLACED

Labour cost: steepest and largest increase in the EU. And mostly concentrated on non-business sector 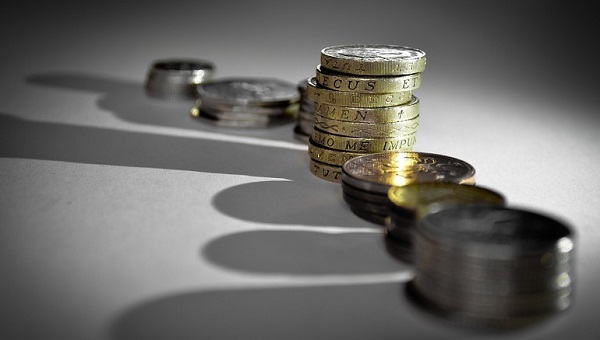 Romania recorded in the first quarter of 2018 the highest labour cost increase among all EU member states, according to data released by Eurostat.

It is noteworthy and worth to pay attention, the signal level specified in the requirements of the EU macroeconomic scoreboard, which signals significant imbalances in national economies, is 12% and we are the only who exceed it. 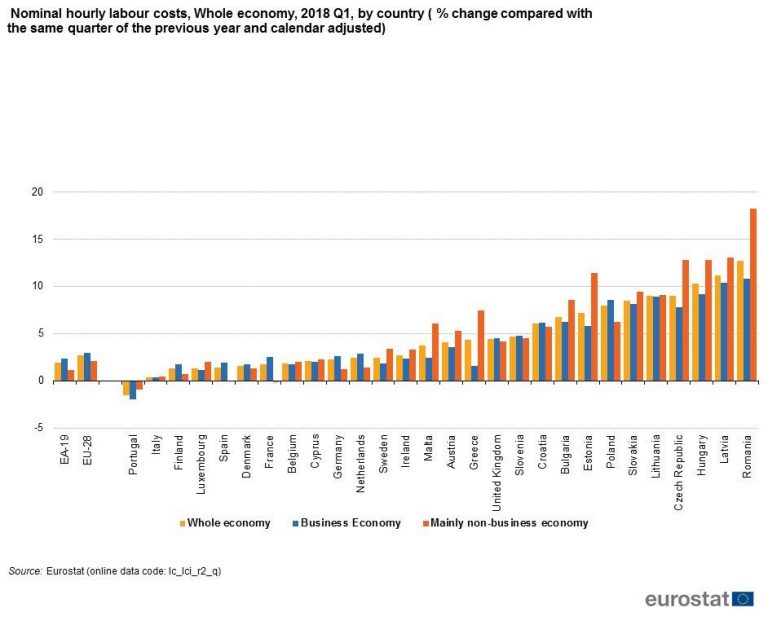 The result comes shortly after the EU statistical body announced the 15% increase of the same economic indicator for Romania in 2017, at values expressed in euro. Last year we also were European champions in the field, ahead of Bulgaria (+ 12.0%), the Czech Republic (+ 11.2%) and Hungary (+ 10%).

Immediately behind these countries were Lithuania (+ 9%), Poland (+ 8.7%), Estonia (+7.4%) and Latvia (+ 7%). This shows that we are dealing with an objective process of convergence towards labour remuneration levels from the West.

Only that the speed of this process in Romania is higher than recommended and the trend of increase is significantly higher in the non-business sector, which is not directly linked to the labour productivity increase (which showed a decline in the first quarter from + 6.4% in January to just + 0.2% in March).

For reference, we mention that the EU-28 average hourly labour cost increase rate was 2.7% compared to the same quarter of the previous year, while the rhythm was lower in the Eurozone (only +2.0%) and there was even a decline of -1.5% in Portugal.

Of course, the higher rhythm of increasing wage costs is justified in Romania by the relatively low level from where we started. We have only reached 6.3 euros/hour as an average last year (excluding the agriculture and public administration, in enterprises with at least 10 employees), compared to an average of 24 euro/hour across the European Union and 25.9 euro/hour in the Eurozone.

The advance in labour costs was one of the factors that contributed to the increase in prices of the industrial production price index to 4.2% in April 2018 compared to the same month of the previous year, and they will be transmitted through the supply chain across the economy over the coming months.

Unfortunately, while it was normal for the GDP share representing the employees’ remuneration to increase to values closer to the European practice (from 34% in 2016 it reached 36% in 2017 and is to reach 37% this year and the 40% threshold in 2021), the balance of the increase distribution was clearly upset in favour of the public sector.

The 12.7% increase registered in Romania is mainly due to the increase by 18.3% in the hourly labour cost in the non-business sector, while the manufacturing industry, which determined the most and set the tone of the economic growth, only benefited from 9.9%.

Significantly, according to the latest official data, the ratio between the average wage in the manufacturing sector and the national average wage fell below 87%, while at the European level it is around 100%.

In conclusion, we have a record salary increase in the EU, which we have also maintained at the beginning of this year above the recommended theoretical threshold. Focused with a priority on sectors that are not directly linked to the labour productivity and the GDP growth.

A significantly declining level, according to the signal estimate on Q1 2018 (only 4%, from 6.9% in 2017), which should determine us to correlate more closely these two indicators.

Luca de Meo (foto), the new general manager (CEO) of Renault group, considers that Dacia project proved to be a miracle and that no one… END_OF_DOCUMENT_TOKEN_TO_BE_REPLACED

A former Soviet airbase in central Romania could become a hub for US Air Force operations in south-eastern Europe, where the Pentagon is seeking to… END_OF_DOCUMENT_TOKEN_TO_BE_REPLACED

Nuclearelectrica's Board of Directors has been mandated to initiate proceedings to terminate negotiations with China General Nuclear Power Group (CGN), as well as legal effects… END_OF_DOCUMENT_TOKEN_TO_BE_REPLACED

Romania imported an amount of electricity of almost 796 GWh in the first month of this year, by more than 36% above what it exported… END_OF_DOCUMENT_TOKEN_TO_BE_REPLACED

GFG Alliance has committed to invest one billion euros to upgrade Galati steel plant in order to reduce emissions and increase production. Another EUR 1… END_OF_DOCUMENT_TOKEN_TO_BE_REPLACED

The Transport Ministry, as the Intermediate Body in Transport, approved the financing request for the project "Construction of Sibiu - Pitesti highway", Sections 1, 4… END_OF_DOCUMENT_TOKEN_TO_BE_REPLACED

Lack of trust in authorities, corruption and low living standards are the main reasons why young people leave Romania. The data is part of a… END_OF_DOCUMENT_TOKEN_TO_BE_REPLACED

Romania is the EU country with the fewest cars in terms of the number of inhabitants, according to data recently published by Eurostat. We appear… END_OF_DOCUMENT_TOKEN_TO_BE_REPLACED

The Government is preparing the public for the first measures aimed at avoiding the budget slippage, which would be applied by the PSD-ALDE government. News… END_OF_DOCUMENT_TOKEN_TO_BE_REPLACED

French Prosecutor Jean-Francois Bohnert will be appointed as head of the European Financial Prosecutor's Office, a position for which he was heard on Thursday, 11… END_OF_DOCUMENT_TOKEN_TO_BE_REPLACED

Romania recorded the highest road deaths in the EU also last year, with 96 deaths per one million inhabitants in 2018, almost double the EU… END_OF_DOCUMENT_TOKEN_TO_BE_REPLACED

Sorina Pintea announced on Thursday further new changes that will be brought to the functioning of the health care system, including new rules for employment… END_OF_DOCUMENT_TOKEN_TO_BE_REPLACED

The new order on approval and selection procedures for insolvency practitioners is an important step to a very good direction, industry experts say. ANAF is… END_OF_DOCUMENT_TOKEN_TO_BE_REPLACED