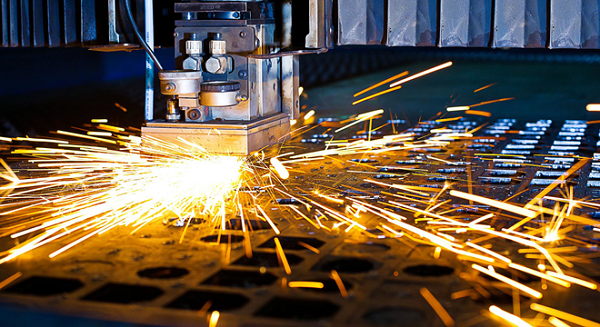 The manufacturing industry sets the tone across the economy (although it contributed only 23.6% in the first half of this year to the GDP formation and 1% of the growth of 4%), and a price problem is a problem of competitiveness.

At the beginning of 2018, the price decrease reserve from 2015 and 2016 has been exhausted, with the rising energy prices, significant wage increases and the exchange rate increase over the initial forecasts. By baseline effect, though, IPPI level declined after the middle of 2018, when it reached a maximum of 6.14%.

Inflation has been initially generated by the index for the foreign market and the gap to domestic IPPI is considerable both in the phase of price reduction and the return to the positive range. A reduction in this gap followed, the equalisation, and now the reversal of the ratios, with the domestic level slightly above the foreign one (5.95% versus 5.71%).

The external inflation channel was also fuelled by the depreciation of the local currency amid a significant increase in the purchasing power. That also manifested for imported products (the trade deficit increased from around EUR 10 billion in 2016 to nearly EUR 13 billion in 2017 and went up by more than 11% in the first seven months of 2018).

By major industrial groups, the highest rise in prices occurred in the energy sector, which saw an exceptionally high monthly growth rate of 2.56%, and where energy bills were more than 14% higher than one year ago and add to the rhythm of about 11% increase in wage costs in the manufacturing industry. Effects will inevitably be transmitted through the entire production chain of goods to consumers.

Compared to the same month of the previous year, the intermediate goods segment came second with + 6.43% (above the average level and well above the other IPPI components excluding the energy industry). The attempt to restructure the manufacturing and streamline production processes has limited the price increase to + 0.21% compared to the previous month.

We are here right on the segment of parts and subassemblies produced in Romania and then integrated into end products, mostly in other countries. That means this trend will be managed by companies that use local suppliers, with implications that are not felt yet at the local consumer level.

Somewhat surprisingly, price increases have remained decent in key final product sectors both at the month and annual levels, namely the capital goods industry (only + 1.45% in the last 12 months and + 0.03% compared to July (+ 2.22% and + 0.04% respectively) and the durable consumer goods industry (+ 2.46%, after a sensational monthly decrease of -0.56%)

They are anonymous enterprises that had to comply with the new wage demands on the labour market and the massively increased energy costs, managed to become more efficient and support (with the price visible in the decline of the profit tax as a share of GDP positioned at the lowest levels in the last four years).

It remains to be seen, though, how long they will be able to find resources for increasing the efficiency and how long they can narrow their profitability to support the pressure from the superior salary increases in the public sector. With a state that has granted unsustainable income increases, hard to find in the private sector, where they have to result from the economic result. 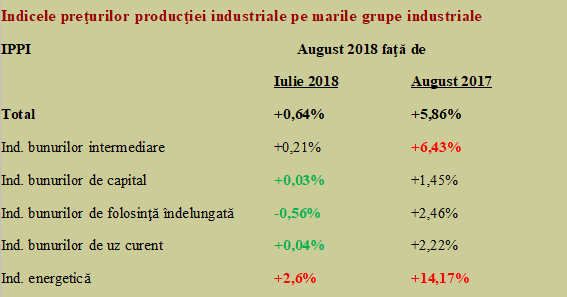 The manufacturing industry recorded price increase rhythms slightly lower than the general ones (only + 0.11% monthly and + 5.65% compared to the same month of the previous year), with significant differences between various sectors (almost 40 % between the evolution of prices in crude oil processing, + 35.33%, and in the manufacturing of transport means other than for road transport -2.56%).

The manufacturing of chemicals (+ 12.88%, more than double compared to three months ago), metallurgy (+ 11.05%), machinery and equipment repair (+ 10.73%) and manufacturing of computers and electronic and optical products (+ 6.46% but on a downward trend) contributed values above the average to IPPI.

By contrast, other segments recorded much lower price increases, such as the manufacturing of metal structures (+ 1.77%, -0.44% over the previous month), electrical equipment manufacturing (+ 1.68% and a significant share in exports), food industry (+ 1.29%) or tobacco products manufacturing (+ 0.31%).

All these developments will be seen with a delay of some months, following the completion of the integration chain into the final product and the delivery to the end-user, implicitly in the CPI. As well as in the GDP deflator (which includes prices across the economy) by which the nominal growth will be „deflated” in order to show us the real economic growth this year.