The implementation of the consolidated budget in the first five months of 2020 registered a deficit of RON 38.8 billion (3.59% of GDP), of which… END_OF_DOCUMENT_TOKEN_TO_BE_REPLACED

Romania remains the weakest innovator in the EU, with a score in last year’s indicator ranking at only 31.6% of the EU’s average performance, according… END_OF_DOCUMENT_TOKEN_TO_BE_REPLACED

According to March 2020 data, the EC Convergence Report for Romania points out that the long-term interest rate for convergence purposes was 1.5 percentage points… END_OF_DOCUMENT_TOKEN_TO_BE_REPLACED

The European Commission is doubling its efforts to show that Europe has learned the lessons of the past and will avoid now, after the “Great… END_OF_DOCUMENT_TOKEN_TO_BE_REPLACED

Rating agency Standard & Poor’s has confirmed the ratings for Romania at ‘BBB minus / A-3’ and maintained the negative outlook. This rating maintains Romania… END_OF_DOCUMENT_TOKEN_TO_BE_REPLACED

“If you want to see that again”: Alarm signals on budgetary execution before an election campaign

The general consolidated budget registered a deficit of 3.7 billion lei on the first nine months of 2016, equivalent to almost half a percent of the estimated GDP for this year. This result is almost ten billion lei below the value for the same period of the last year, when the budget balance was positive after the first eight months (+ 0.86% of GDP).

In nominal terms, the decline of the outcome lies one third in the reduction of total revenues (-3.3 billion lei compared to last year) and two thirds in the expenditure growth (+6.55 billion lei).

The conclusion on 30 September, 2 months before the election campaign: additional payments made by the state to increase household incomes in 2016 were not based on higher budget revenues, despite the economic growth, but on substantially lower revenues.

Evolution of the budget implementation between 2015-2016

We should be aware, however, that if we relate to the economic preliminary results in 2016, we found that the income decrease was of 1.8% of GDP and the expenditure on first nine months decreased by 0.5% of GDP.

From the perspective of the possibilities created by the economic growth, the income decrease entirely generated the increase of deficit (namely 137% of the deficit) and caused the decrease of spending by one-third relative to the GDP increased by about five percent.

In other words, the mix between lowering taxation and providing benefits without support in revenues also led to benefits lower than they would have been if the budgetary implementation had maintained the same as in the previous year. This explains why the economic results do not feel in the everyday life and proves that the path to which we committed is wrong.

We were not able to spend the money of others

The decrease of spending in the first three quarters of this year is also related to our inability to absorb and manage correctly, with our minority participation – but by the book and without any theft – the money made available by the EU. As we remember, it seemed that this was the main reason why we applied to join, for this step to help us become like them faster.

The figures regarding the projects financed with EU grants (which involves our co-financing and the allocation of an amount for expenditures that will be refunded only after verifying the use of money) indicate a minus which almost corresponds to the expenditure decrease. In summary, we have proved in 2016 something unthinkable at the individual level: we were not able to spend the money of others.

Also noteworthy is the arrangement of the budget spending increases by budget chapters, namely + 0.3% of GDP on goods and services, + 0.2% of GDP on staff costs and + 0.1% on social assistance, exactly the opposite to the share of these budget lines. That suggests what could be done discreetly if one or the other were given something extra, depending on their ability to agitate themselves in public. 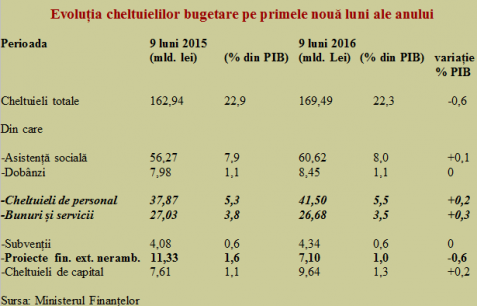 Revenue loss, arising from the EU funds and the VAT cut

The results regarding the revenue indicate quite clearly the loss for the budget caused by cutting the standard VAT and generalizing the reduced rate. Therefore, especially that we should not stimulate any further consumption that is not covered by domestic production, we should not even think about reducing VAT any further, at least in the absence of a substantial improvement of the VAT collection.

The biggest drop compared to the previous year came for the amounts received from the EU for payments and pre-financing. They fell incredibly 92% and led to a loss of 1% of GDP in the public budget. This loss is two times higher than the deficit at the end of September. Would not it have been better to allocate an extra 0.5% of GDP for EU financed projects, to receive that 1% and break even and have now more roads, hospitals or schools? 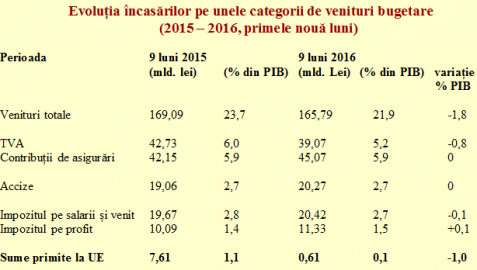 Evolution of revenue on some budgetary revenue categories

It would not hurt to also see that we transferred in terms of taxation about three billion lei from consumption to labour, compared to the same period of last year, which is a more than questionable option. This is because we are on surplus of demand and it is more appealing to avoid legal payments on the labour market.

With Romanian taxes, we cannot get French hospitals, nor German motorways. Only Greek debts

Who thinks that we could ever have medical services like in France or motorways like in Germany with a level of taxes like in Romania has sweet dreams but knocks her head against the reality. Little money available to the community means a weak state and a weak state, even if it can survive (see the need to allocate 2% of GDP to military spending) will never provide quality services.

Moreover, as we promise various imaginary social benefits, like increases of salaries and pensions by 50% – 60% in the next four years at the same time with the absurd bidding for the VAT cut either to 18% or even 16%, deficits and public debt will accumulate to the benefit of those who cannot wait to levy new interest rates on our debt, corresponding to our consumer behaviour, increasingly resembling the Greeks.

The worst part though is that ALL parties go to the same direction in the election campaign that has already started with the presentation of the economic programs, which is the direction of state revenue decrease. These revenues are anyway only two-thirds of the EU average in terms of percentage of GDP. In these circumstances, NO MATTER HOW PUBLIC FUNDS WOULD BE ADMINISTERED, THEY COULD NOT BE ENOUGH.

It seems now counter-intuitive and suicidal, but we should sound the alarm, even at the eleventh hour.

First we must be concerned on who and how will propose measures to increase state revenues by increasing taxes responsibly, not diminishing them chaotically and with no judgement. Otherwise, the state will do nothing but to go out on a limb and will be unable to apply the social programs and especially! – make necessary investments to bring Romania closer to the West.

Beyond the pursuit of daily life and the obsession for more money in the pockets, topics like education, health or personal safety will matter more and more in terms of living standards.

It will be only when a weaker state will not be able to provide these things for all anymore (not even to the extent it does now) and we shall pay them entirely from our pocket, we shall realize the mistake made with the mix between chaotic tax reduction and voting for benefits without backing.

Nuclearelectrica's Board of Directors has been mandated to initiate proceedings to terminate negotiations with China General Nuclear Power Group (CGN), as well as legal effects… END_OF_DOCUMENT_TOKEN_TO_BE_REPLACED

Romania imported an amount of electricity of almost 796 GWh in the first month of this year, by more than 36% above what it exported… END_OF_DOCUMENT_TOKEN_TO_BE_REPLACED

GFG Alliance has committed to invest one billion euros to upgrade Galati steel plant in order to reduce emissions and increase production. Another EUR 1… END_OF_DOCUMENT_TOKEN_TO_BE_REPLACED

The Transport Ministry, as the Intermediate Body in Transport, approved the financing request for the project "Construction of Sibiu - Pitesti highway", Sections 1, 4… END_OF_DOCUMENT_TOKEN_TO_BE_REPLACED

Lack of trust in authorities, corruption and low living standards are the main reasons why young people leave Romania. The data is part of a… END_OF_DOCUMENT_TOKEN_TO_BE_REPLACED

Romania is the EU country with the fewest cars in terms of the number of inhabitants, according to data recently published by Eurostat. We appear… END_OF_DOCUMENT_TOKEN_TO_BE_REPLACED

The Government is preparing the public for the first measures aimed at avoiding the budget slippage, which would be applied by the PSD-ALDE government. News… END_OF_DOCUMENT_TOKEN_TO_BE_REPLACED

French Prosecutor Jean-Francois Bohnert will be appointed as head of the European Financial Prosecutor's Office, a position for which he was heard on Thursday, 11… END_OF_DOCUMENT_TOKEN_TO_BE_REPLACED

Romania recorded the highest road deaths in the EU also last year, with 96 deaths per one million inhabitants in 2018, almost double the EU… END_OF_DOCUMENT_TOKEN_TO_BE_REPLACED

Sorina Pintea announced on Thursday further new changes that will be brought to the functioning of the health care system, including new rules for employment… END_OF_DOCUMENT_TOKEN_TO_BE_REPLACED

The new order on approval and selection procedures for insolvency practitioners is an important step to a very good direction, industry experts say. ANAF is… END_OF_DOCUMENT_TOKEN_TO_BE_REPLACED

Romania lost to Estonia in the final vote to get the non-permanent member position within the UN Security Council for the period 2020-2021. On Friday,… END_OF_DOCUMENT_TOKEN_TO_BE_REPLACED

eMAG hopes to get the opinion of the Hungarian Competition Council over the next two months for the acquisition of Extreme Digital, the market leader… END_OF_DOCUMENT_TOKEN_TO_BE_REPLACED