How „economic and monetary deepening” of EU will look like: A hint from European Commission 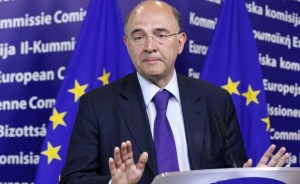 The European Commission (EC) presented on Wednesday a reflection paper comprising some possible ways to follow for deepening the EU’s economic and monetary union, a release of the EU executive said.

The options proposed in the document seem to supplement the debate on the future of the EU launched by Jean-Claude Juncker and, according to the release, are intended to contribute to „reaching a broader consensus on addressing future challenges and bringing a new dynamic” to this important debate.

To make progress, the European Commission considers that some measures will have to be taken in three key areas:

„Rethinking the balance” between the Commission and the Eurozone, permanent Eurogroup president, unification of foreign representation

An integrated and well-functioning financial system is essential for an effective and stable economic and monetary union. To continue in the spirit of the recent years’ achievements, we need to reach a consensus on the way forward.

That means making progress on the elements that are already set and agreeing on some additional measures to be taken by 2025.

To that purpose, we will have to complete the banking union and make progress on mitigation and sharing the banking sector risks, by taking measures to increase the resilience of the European banks. Also, achieving results within the capital markets union is crucial if we are willing to offer the real economy more diverse and innovative financial opportunities, including through the capital markets, the EC estimates.

For the economic and monetary union to be stronger, member states should accept to share, under a common legal framework, more responsibilities and decisions on Eurozone related issues.

That could be achieved through the EU treaties and its institutions, based on an intergovernmental approach or, as it is the case now, a mix of the two options.

Continuing the political integration could imply a rethink of the balance between the Commission and the Eurogroup and could justify the appointment of a permanent Eurogroup president as well as the unification of the foreign representation of the Eurozone.

Pierre Moscovici: Priority is to eliminate economic and social divergences within Eurozone

„Euro is already a symbol of unity and a guarantee of stability for the Europeans. Now we must act to make the euro a driver of common prosperity.

Only by eliminating the economic and social divergences within the Eurozone we will we be able to combat this so dangerous populism that these divergences fuel. It is time to finish the journey started at Maastricht toward a genuine economic and monetary union that is based on strong institutions and democratic accountability,” said Pierre Moscovici, Commissioner for Economic and Financial Affairs, Taxation and Customs.

According to the EC, the completion of the economic and monetary union is not an end in itself but a necessary element for job creation, economic growth, social equity, economic convergence and financial stability.

The responsibility and solidarity, risk mitigation and sharing will have to be well correlated. The economic and monetary union should remain open to all EU member states and the decision-making process will have to be more transparent and based on democratic accountability. These are guiding principles for the future actions.

Obtaining a broad political consensus on the direction we are heading and establishing a global roadmap with well-defined milestones are key elements to success, the release says.