Early warning: average salary increases in lei but makes no progress in euro 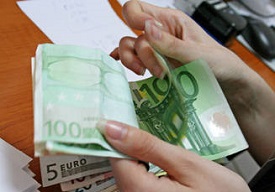 The average net salary announced by the National Institute of Statistics on Monday, for September 2016, was 2,094 lei, 18 lei or almost one percent higher than in the previous month. Expressed in the European single currency, the average net salary was though 466 euros for the third consecutive month (or 940 euros calculated at the average prices in the EU).

The purchasing power was 14.9% higher than the level registered a year ago, which marked the strengthening of the positive trend of this indicator. This was the situation BEFORE the electoral campaign and implementing the promises of substantial revenue increase for broad categories of the population, related to the state budget.

Against the background of maintaining the price increases within a negative range compared to the previous year (which will not happen again in 2017), Romanians’ incomes obtained from their work reached in real terms 159.9% compared to the reference month, October 1990 (the last one before price liberalization), four tenths of a percent more than in the previous month.

We present below the evolution from the beginning of 2016. This evolution shows a salary increase of nearly eight percent over eight months. Specifically, 7.7% more in lei and 7.4% more in euros. Since the middle of this year, the advance in lei unnoticedly started to exceed the advance in euro and the revenue increases in lei have not led to higher incomes in euros anymore.

To translate that, the first signs appeared indicating that the populist indexations of the income in nominal terms „are slipping” and the exchange rate will have to accommodate the inflammation of the revenues that exceeds the real economic possibilities. Unfortunately, the much better solution of transferring a part of the productivity gains towards the increase of the purchasing power seems to have been abandoned.

The reasons are clear.

The first one is that we have no more productivity gain on the first eight months of this year, according to the official statistics.

The second one is that there can be no transfer made if the wage increases enter an inflationary spiral, i.e. we come to „growing faster” type of competition between salaries and prices.

Basically, the purchasing power increased three times more than the economy (about 15% versus 5%) that is precisely the reason why, logically, it should not have to be applied other increases in the immediate future without consequences on inflation, budget and current account deficits and the exchange rate. Otherwise, it would be like the Nobel Prize for Economics is already awarded to Romania.

More specifically, maybe somebody can explain to some experts in the field and not to the electorate, how they can provide, in four years, pensions 61% higher and salaries 44% higher, from a GDP by 34% higher, admitting that the 34 percent will become reality. Respectively, what financial engineering would apply so that the pensions increase could be 80% higher than the GDP growth and the salary increase (from which pensions are paid) by 30% higher than the economy growth.