On Thursday, the appointed Prime Minister, Ludovic Orban, presented to colleagues from the National Office the document that he will submit to the Parliament, which… END_OF_DOCUMENT_TOKEN_TO_BE_REPLACED

The long-term interest rate fell below zero in the Eurozone and dropped to only 0.28% on average at the EU level, half as compared to… END_OF_DOCUMENT_TOKEN_TO_BE_REPLACED

Net costs for the state with holiday vouchers for public sector employees and the VAT cut for tourism will amount to RON 1,878 million in… END_OF_DOCUMENT_TOKEN_TO_BE_REPLACED

Continuing quantitative easing: how justified is it? (III)

In this last article from the series devoted to the analysis of the quantitative easing performed by the European Central Bank (ECB), we will deal… END_OF_DOCUMENT_TOKEN_TO_BE_REPLACED

In this second article of the series dedicated to the analysis of the quantitative easing performed by the European Central Bank (ECB), we will focus… END_OF_DOCUMENT_TOKEN_TO_BE_REPLACED

Discharging imbalances on RON exchange rate could start even this year. Analysts’ scenarios and BNR’s uncertainty 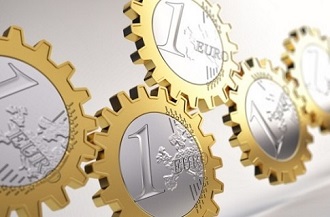 Analysts’ scenarios on the evolution of the exchange rate are rather prudent for the coming months, but severe for the beginning of the next year and later when the RON/euro rate could even reach 4.85.

Moreover, according to BT, the average rate for 2020 is 4.84 RON/euro, which means higher maximum levels over the course of the year.

The average of the expectations of over 200 members of the analysts’ association CFA Romania also reaches a rate of almost 4.85 RON/euro over the next 12 months.

So far, BNR’s conservative currency exchange rate policy has prevented RON from a depreciation with the imbalances, which does not seem to have happened anywhere else in the Central and Eastern Europe. 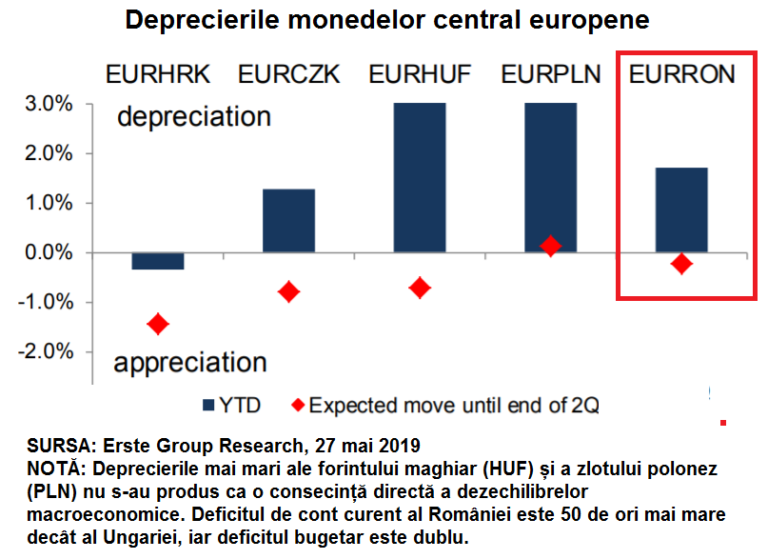 Analysts’ independent estimates set a depreciation of down to 4.85 RON/euro next year and some of them, more severe, insist on a foreseeable threshold of 5 RON/euro if external shocks will arise because of the recrudescence of the trade war between large powers.

The fact that Romania’s largest bank (by assets) expects a jump from 4.79 to 4.84 RON/euro in the average annual rate in 2020 compared to 2019 implies the hypothesis that RON depreciation will be carefully controlled by the central bank this year.

Despite the amplifying imbalances in Romania’s accounts, the political and electoral context of a year considered “errant” by the governor of the central bank will count more in the BT scenario. The electoral year continues with the presidential election, probably in November.

However, analysts expect a gradual depreciation even this year, due to the pressure of the budget deficit, of which (unofficially) a few people still doubt that it will not exceed 3% and especially the record trade deficit (probably over 7% of GDP in 2019) and the pressure of the unsustainable current account deficit (4.8% of GDP, according to estimates of the banking sector).

“One of the valves for offsetting (budget and current account) imbalances is the exchange rate and I will be surprised if that is not used, within an evolution not necessarily drastic even this year, in the coming months. The exchange rate could reach 4.80 RON/euro and even slightly above this threshold,” said Claudiu Cazacu, research director of XTB Romania investment house for cursdeguvernare.ro.

What will BNR do?

Analysts still expect, officially, that the National Bank of Romania (BNR) does not increase the monetary policy rate, rather taking into account the same electoral context.

However, April’s inflation rebound (4.11%) has already made the BNR rise end-of-year expectations to 4.2%, and it might consider that it can no longer postpone the increase of interest rate for next year if inflationary pressures increase.

Annual inflation rate and inflation that is under BNR’s influence

However, BCR analysts Dorina Ilasco and Eugen Sinca have hypothesized that “BNR could change the monetary policy rate no sooner than in August,” according to May monthly report of the bank.

Because markets are more on vacation, there are conditions for the relative stability in recent months to maintain at least for the next two months, but inflation related risks, especially those linked to food products prices, will need to be carefully monitored.”

However, if inflation continues to be “significantly above 4%, we should expect increased volatility in both interest rates and exchange rates,” said analysts quoted in BCR’s monthly report from May.

BNR can continue the policy of attracting excess RON liquidity from the money market (which could transfer to euro). BNR Governor Mugur Isarescu even said that the central bank will diversify its “money market intervention instruments to react more quickly”.

“A more severe control of the liquidity is possible to, but it will not exceed the 3.5% threshold in terms of interest” and not for more than two months – Mugur Isarescu said at the middle of May without mentioning though since when.

The BNR has so far attracted the excess liquidity at the monetary policy rate of 2.5%. Lombard last-resort credit facility rate for banks is 3.5% and analysts’ speculation can start from here on.

A variable difficult to introduce into the equation is the potential change in the BNR management, as most of it is at the end of the mandate, but it is unclear how likely that is in the autumn, according to the chart.

Romania has a clear bill for currency payments. Instead, alternatives to depreciation are uncertain and unlikely this year.

“Capital inflows to Romania should be consistent and who would believe that huge European funds will be attracted in such a short timeframe?! And foreign investments, yes, would be a solution, but this is doubtful, because the economic cycle reached maturity, and global trade relations are rather getting even tenser,” said Claudiu Cazacu.

Nor other options are applicable in the short term and even they were likely, such as capital inflows through public-private partnerships, much desired by the Government. “In reality, though, successful examples of such projects are limited,” says Horia Braun Erdei, Chief economist of BCR.

“And budget constraints for a significant increase in public investment are too high for us to be able to hope for full compensation of an adjustment in the increase of consumption and exports,” the economist added.

Before the next electoral competitions, “unfortunately, the same as in 2008, Romania does not afford too many incentives for the economy, either on a fiscal or a monetary level.”

“On the contrary, a sincere and useful competition for the society should involve topics related to the management of the adjustment of current imbalances:

The BCR chief economist admits, though: “Of course I am not so naive to believe that such topics with rather negative connotations would have even little chances to get visibility in the debates and electoral programs.”

The Transport Ministry, as the Intermediate Body in Transport, approved the financing request for the project "Construction of Sibiu - Pitesti highway", Sections 1, 4… END_OF_DOCUMENT_TOKEN_TO_BE_REPLACED

Lack of trust in authorities, corruption and low living standards are the main reasons why young people leave Romania. The data is part of a… END_OF_DOCUMENT_TOKEN_TO_BE_REPLACED

Romania is the EU country with the fewest cars in terms of the number of inhabitants, according to data recently published by Eurostat. We appear… END_OF_DOCUMENT_TOKEN_TO_BE_REPLACED

The Government is preparing the public for the first measures aimed at avoiding the budget slippage, which would be applied by the PSD-ALDE government. News… END_OF_DOCUMENT_TOKEN_TO_BE_REPLACED

French Prosecutor Jean-Francois Bohnert will be appointed as head of the European Financial Prosecutor's Office, a position for which he was heard on Thursday, 11… END_OF_DOCUMENT_TOKEN_TO_BE_REPLACED

Romania recorded the highest road deaths in the EU also last year, with 96 deaths per one million inhabitants in 2018, almost double the EU… END_OF_DOCUMENT_TOKEN_TO_BE_REPLACED

Sorina Pintea announced on Thursday further new changes that will be brought to the functioning of the health care system, including new rules for employment… END_OF_DOCUMENT_TOKEN_TO_BE_REPLACED

The new order on approval and selection procedures for insolvency practitioners is an important step to a very good direction, industry experts say. ANAF is… END_OF_DOCUMENT_TOKEN_TO_BE_REPLACED

Romania lost to Estonia in the final vote to get the non-permanent member position within the UN Security Council for the period 2020-2021. On Friday,… END_OF_DOCUMENT_TOKEN_TO_BE_REPLACED

eMAG hopes to get the opinion of the Hungarian Competition Council over the next two months for the acquisition of Extreme Digital, the market leader… END_OF_DOCUMENT_TOKEN_TO_BE_REPLACED