Convergence of wages versus price convergence 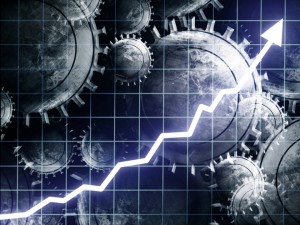 The living standard in Romania increased significantly due to an accelerated wage convergence compared to the EU average and the stagnation in price convergence toward the same average – official data on the 2014-2017 period show.

But this trend decoupling between the two types of convergence (which will inevitably occur over time) can no longer continue.

In terms of wages, the major advantage was precisely the relatively low starting point combined with the rapid increase in relative labour productivity per EMPLOYED person (which has doubled in the last 15 years, from 31% of the EU average in 2003 toward 65% in 2017 and in 2014 went through the level of 57% of the same average). 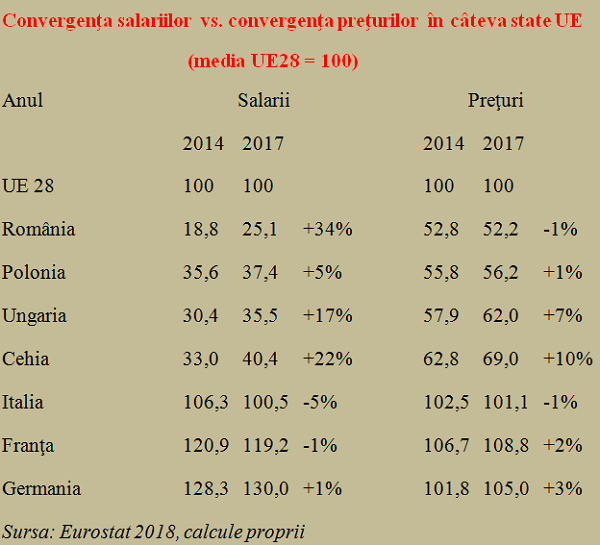 The increase in productivity made possible the coverage of the large gap remained to be closed, in the context of a small labour remuneration share of GDP, both in relation to the Western practice and the situation in former colleagues from the Socialist bloc that joined the EU.

This opportunity is being closed, even though it can still be used in the medium term.

With regard to price convergence, measures taken at the mid of 2010, in the crisis period, allowed afterwards, by the base effect, the lowering of the general level with the reduction of standard VAT from 24% to 20% and then to 19% combined with the general decrease toward the reduced rate on food products, where we hold the European record in terms of share in the consumer basket.

But this is where the problem is. VAT cuts (leaving aside the fact that budget revenues have fallen to the smallest share of GDP in the EU, except for Ireland) have been of a short-term nature and cannot be repeated. The plateau of the price alignment trend towards the EU average went increasingly upwards during 2018.

At an annual average HICP inflation that will go somewhere above four percentage points (4.7% would be the forecast according to the national methodology) we shall add, taking also into account the marginal RON devaluation against the European single currency (estimated to go from 4.57 lei/euro to 4.65 lei/euro), something between two and three percentage points to the ratio between prices in Romania and the European average.

Percentages that will seriously erode real incomes, for the first time in four years when we got used to not really considering either price increases masked by tax cuts or a RON devaluation, small but unforeseen in the forecast scenarios presented last year (from 4.56 lei/euro, November 2017 forecast presented an average exchange rate of 4.55 lei/euro for 2018).

An interesting coincidence, another four years with a cumulative 34% increase in net average wage (of course, again without any increase in RON/euro exchange rate, but if only stagnated, because expectations of the vast majority of bank specialists slightly tend toward the opposite direction).

Only this time, price convergence (especially in the context of the stability of the exchange rate) will work as clearly as possible. As we can see from the experience of Hungary or the Czech Republic, positioned slightly ahead of us on the way to the West. Or, better and worth to remember, Poland’s experience, which has not plunged into wage increases and maintained prices under control much better.

What we need to remember is that the increase in purchasing power and living standards can be made only to the extent that wages converge faster than prices. For now, it seems natural to us from the position of a country that is catching up. But it would not hurt to see in the case of big European economies, which are also our main trade partners, what can happen as we go to the upper level with the incomes compared to the productivity.

Italy has adjusted incomes quite significantly, without the price reaction to occur to the same extent, and France, which was shyer, continued to have a relative price increase. Not even the European engine, Germany, has managed to raise incomes beyond the price increase.

In other words, once the price convergence induced by the income increase is produced, it will be much harder, if not impossible, to get back to the starting point by lowering incomes (not to mention, if you remember, that in the case of pensions, which are paid also from salaries, it is not possible to do that, for legal reasons). Of course, unless we apply the emergency adjustment to the exchange rate, which would cause us a lot of trouble.

Therefore, in the game between convergence of incomes and price convergence, a game that will run differently over the next four years compared to the previous four years, the dosage of increases will have to be made with much more care, without falling into the error of incomplete induction (if we applied it and that worked without breaking the economic balance, it will work every time).

The result of the game, depending on how able we shall be to do that, and how well we shall know what players to send on the field, will be seen in 2022. When, according to some commendable intentions, we are to have Maastricht indicators updated (without having them lost along the way, now we have our pockets open and are running quite fast) and enter the antechamber for the euro adoption in 2024.