Some charts: Perfect chaos in Romanian budgets. A 4-year analysis of difference between law and implementation 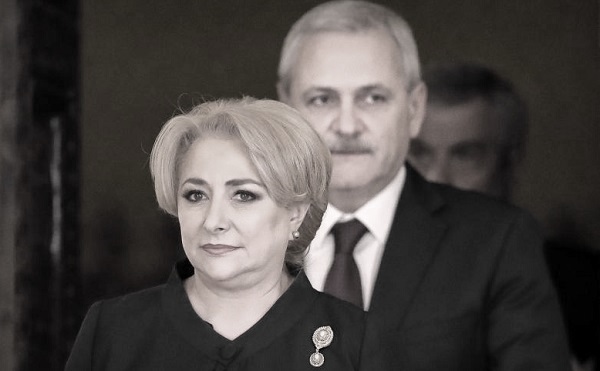 Although at first glance it is difficult to draft them, Romania’s public budgets are, in fact, a series of indicators and lists of revenues and expenditures that are not going to have anything to do with the reality.

In this analysis, we make a comparison between Romanian budgets established by law and what remains of them and how they are implemented until the end of each year. Despite rectifications that are always announced as being „positive”.

Differences are, in some cases, huge – especially in indicators and figures related to development.

Infrastructure investments, for example, are even twice as low as planned.

Money for Health always proves insufficient, as the budgets of recent years are increasingly burdened by wage increases whose impact is always imprecisely calculated.

Researchers see their projects frozen as a result of blocked European funds – despite the Law on budget which feeds them with money, while mayors from the party in power enjoy budgets that are even double compared to those allocated in the laws issued at the beginning of the year.

The analysis of cursdeguvernare.ro mirrors the budget laws of 2015-2019 and the implementations at the end of the year. The only indicator that remained relatively constant in their construction was related to the budget deficit, as Romania is bound to maintain within the target of 3% of GDP.

In the period 2016-2018, since the money for 2014-2020 European financial year was released, budget implementations for infrastructure was by over RON 6.8 billion below the amounts allocated in the budget laws for each year.

In the period 2015-2017, another RON 5.2 billion were cut from the post-accession funds related to the previous financial year.

In none of the four years under review, the budget implementation in the field of transport investment reached the budgeted level. 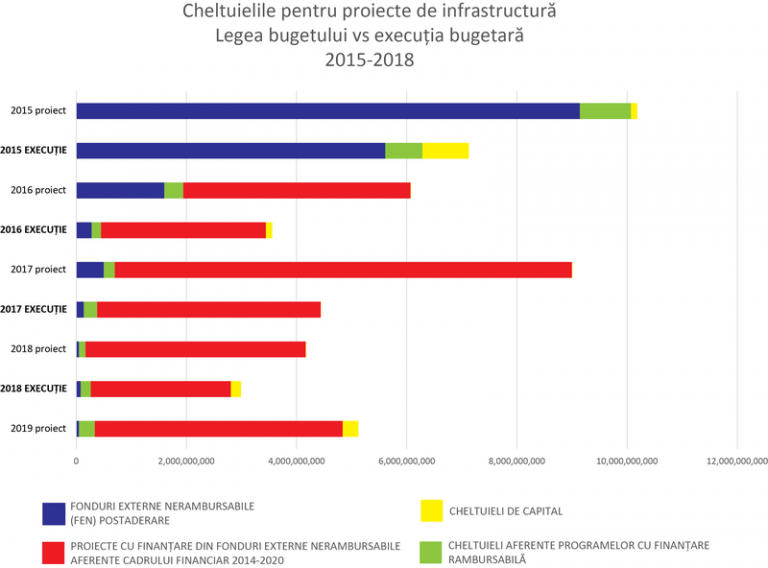 Research: formal allocations, implementations away from at least 1% of GDP

During the period under review, transfers made by the Ministry of Research to the beneficiaries of funds in this field were above allocations in just two years, while in the other two (2016 and 2017), researchers received by about RON 250 million less than promised at the beginning of these years.

For projects financed by European funds, implementations were weaker year by year.

In 2018, for example, almost RON 400 million was formally allocated to projects run with European funds but the implementation was only RON 126.5 billion.

It is worth mentioning that last year the ministry has blocked calls in this area, while researchers prepared numerous files to submit for European funds.

Romania planned to spend 1% of GDP from public funds on research and innovation. 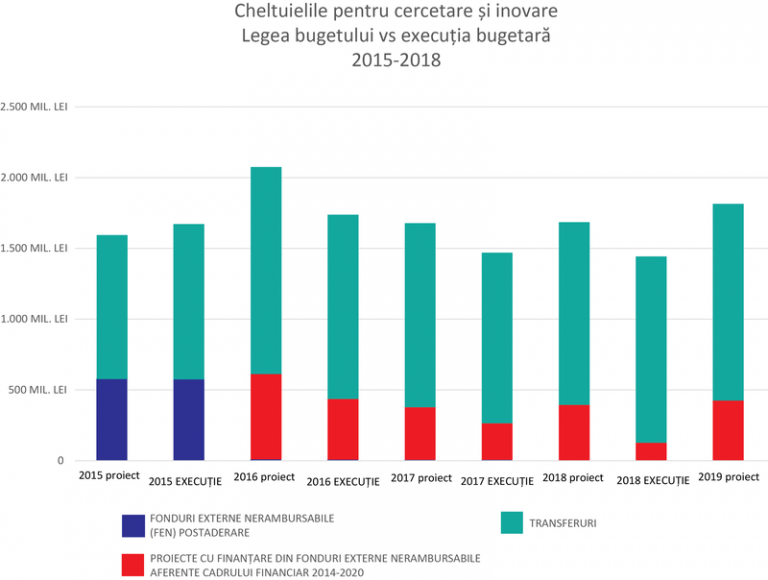 Health, a budget inflated in a single go, exclusively by wage increases

The expenditures needed to fund the healthcare system were, except in 2016, higher than the Government anticipated through the budget laws.

Big differences between budgets and final implementation started to appear in 2017, when RON 3.6 billion were transferred from the budget of the National Health Insurance House to cover the salary increases, amounts that were not provided in the initial budget.

Other House’s expenses suffered that year. For example, the implementation indicates expenses by over one billion RON smaller for medicines, consumables and other sanitary materials, as well as a reduction of RON 0.6 billion in the financing of medical services in hospitals.

And in 2018, when these expenses were included in the draft budget, they proved to be much underestimated, so at the end of the year, RON 8.1 billion were transferred from the House’s budget to cover salary increases, compared to RON 4.6 billion, the amount allocated in the initial budget. 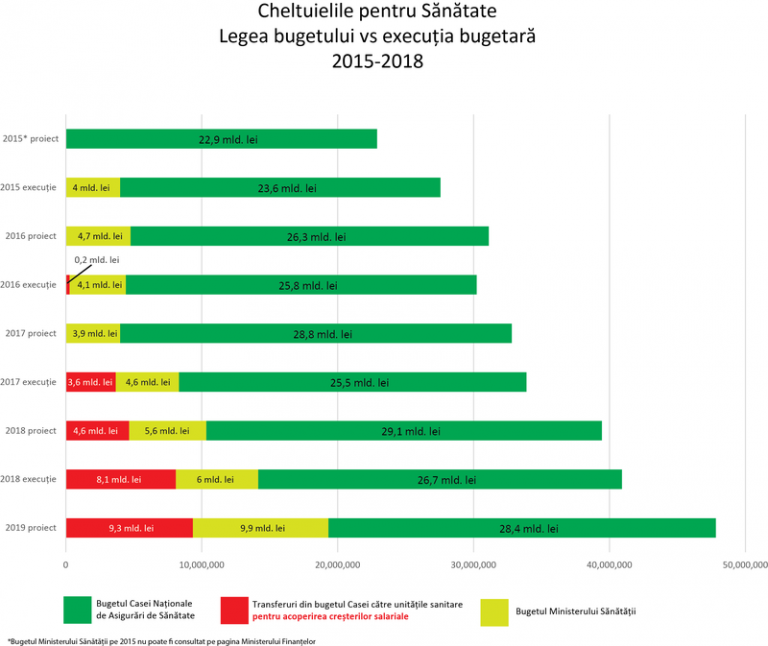 For 2019, the National Health Insurance House has a total budget of RON 37.8 billion, which means a 8.5% increase compared to last year, namely three billion RON.

On the other hand, only the transfers needed to cover salary increases in the health sector amount to RON 9.3 billion, by RON 1.2 billion higher than in 2018, so the budget is in reality by only two billion RON higher than last year.

Most of this difference was allocated to medicines and supplies needed in hospitals (RON 11.9 billion, compared to RON 9.9 billion in 2018). On the other hand, negative differences occurred in hospital medical services (minus RON 0.7 billion versus 2018).

Regarding the Ministry of Health budget, which only partly finances the actual expenditure in the system (especially by the national health programs), the big 2019 budget chapter missing is related to excise duties which had a contribution of RON 1.6 billion to last year’s budget. This year, excise duties go to cover other gaps.

While in the case of infrastructure budgets, allocations were high and results sometimes at half, in the case of the National Program for Local Development (PNDL) we can see a weak budgetary planning in the opposite direction.

PNDL, a program whose reputation is that it allocates money based on political interests, is among the few capital expenditures that at the end of the year prove to be higher than at the beginning. 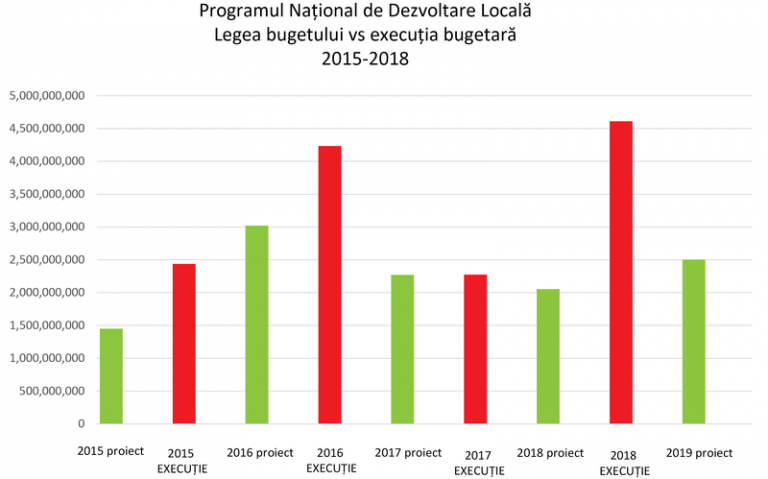 The Fiscal Council is of the opinion that GDP growth is overvalued and appears to be overly optimistic in relation to similar assessments by other institutions.

Another problematic issue raised by the Council is the extremely favourable assumptions on the dynamics of employee number and the gross wage in the competitive sector, expected to increase by 3.7% and 13.8%, respectively, in 2019.

The Council also has reservations especially on the projected evolution of VAT revenue from the draft budget, as a significant overvaluation is likely to occur even in the context of applying the official macroeconomic scenario.