According to the data communicated by the NIS, in January 2020, Romania registered a new decrease in monthly industrial production, by -2.4% in gross series… END_OF_DOCUMENT_TOKEN_TO_BE_REPLACED

Dacia-Renault presented its “show car” Dacia Spring, “which prefigures the first 100% electric model of this brand” and will enter series production in 2021, according… END_OF_DOCUMENT_TOKEN_TO_BE_REPLACED

With current data and based on the legislation already adopted, Romania’s public debt is forecasted to reach 91.2% of GDP, according to the analysis of… END_OF_DOCUMENT_TOKEN_TO_BE_REPLACED

The progress in the development of Romanian infrastructure networks of utilities and roads is too slow compared to the needs and our neighbours’ progress, as… END_OF_DOCUMENT_TOKEN_TO_BE_REPLACED

Alarm on human capital: Increasing number of young people who get neither a job nor education. A comparison with EU countries 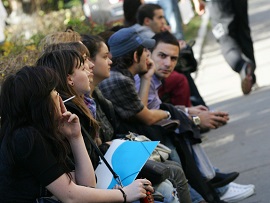 Romania ranked fourth in the EU in 2016 by the proportion of young people (20-34) who are neither employed nor included in a form of education, with the percentage of 23.5%, according to the data provided by Eurostat.

More seriously, we are among the countries where this indicator has deteriorated the most over the past ten years.

Abbreviated NEET in English (neither in employment nor in education or training), the indicator provides essential information on the way people are transitioning to a productive activity and focuses on the number of young people who are not in the education process nor on the labour market.

The graph below – Proportion of young people who do not work and are not in the education process in the EU countries, 2016:

We note that the age range of 20-34 years has been chosen by the EU statistical body because it has been considered that the clear majority of those in the 15-19 age group, although able to work legally, continue to participate in a form of education (formal or non-formal), the percentage at the EU level being 90.2%. 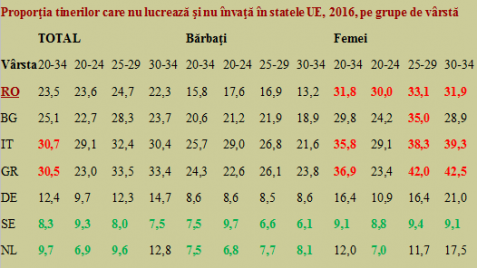 We have also selected countries with big problems in the field and those in which not being integrated into the labour market and not being in a form of education is a rarity, like the Nordic countries. This explains the success of these economies compared to the least developed countries from the southern part of the continent, where the problem primarily comes from the social consciousness and then from the strictly economic considerations.

In 2016, almost one in three Italian youngsters aged 20-24 were neither employed nor enrolled in one form of education, one in four in Romania (23.5%), Greece (23.0%) and Bulgaria (22.7%) and about one in five in Spain (21.2%) and Croatia (19.6%). Although we rank fourth overall by the NEET indicator, the trend appears to be worrying as we are on the 2nd position in the 20-24 age category, with a relatively rapid deterioration from the seventh position in the 30-34 age group and the fourth position in the 25-29 age group at the EU level.

For reference, it should be emphasised that in countries experiencing big problems in terms of integrating young people into the labour market, such as Italy, Spain or Greece, the 20-24 age group posts significantly lower values of this indicator, which means that efforts have been made to improve the situation.

In these countries, young people have better understood the importance of integrating into productive activity or improving their education compared to the previous generations. In our country, it is exactly the opposite, which should give food for thought to decision-makers. With the implementation of rapid measures that would reverse the trend we have entered and leads us to the top of the European ranking of the non-involvement of young people in productive activities.

It should also be mentioned that Romania is also characterized by a high discrepancy between men and women in the inactivity indicator for NEET young people, with the men at similar levels with developed economies (for instance, at the same level as Germany in the 20-24 age group, 50.6%).

Romania imported an amount of electricity of almost 796 GWh in the first month of this year, by more than 36% above what it exported… END_OF_DOCUMENT_TOKEN_TO_BE_REPLACED

GFG Alliance has committed to invest one billion euros to upgrade Galati steel plant in order to reduce emissions and increase production. Another EUR 1… END_OF_DOCUMENT_TOKEN_TO_BE_REPLACED

The Transport Ministry, as the Intermediate Body in Transport, approved the financing request for the project "Construction of Sibiu - Pitesti highway", Sections 1, 4… END_OF_DOCUMENT_TOKEN_TO_BE_REPLACED

Lack of trust in authorities, corruption and low living standards are the main reasons why young people leave Romania. The data is part of a… END_OF_DOCUMENT_TOKEN_TO_BE_REPLACED

Romania is the EU country with the fewest cars in terms of the number of inhabitants, according to data recently published by Eurostat. We appear… END_OF_DOCUMENT_TOKEN_TO_BE_REPLACED

The Government is preparing the public for the first measures aimed at avoiding the budget slippage, which would be applied by the PSD-ALDE government. News… END_OF_DOCUMENT_TOKEN_TO_BE_REPLACED

French Prosecutor Jean-Francois Bohnert will be appointed as head of the European Financial Prosecutor's Office, a position for which he was heard on Thursday, 11… END_OF_DOCUMENT_TOKEN_TO_BE_REPLACED

Romania recorded the highest road deaths in the EU also last year, with 96 deaths per one million inhabitants in 2018, almost double the EU… END_OF_DOCUMENT_TOKEN_TO_BE_REPLACED

Sorina Pintea announced on Thursday further new changes that will be brought to the functioning of the health care system, including new rules for employment… END_OF_DOCUMENT_TOKEN_TO_BE_REPLACED

The new order on approval and selection procedures for insolvency practitioners is an important step to a very good direction, industry experts say. ANAF is… END_OF_DOCUMENT_TOKEN_TO_BE_REPLACED

Romania lost to Estonia in the final vote to get the non-permanent member position within the UN Security Council for the period 2020-2021. On Friday,… END_OF_DOCUMENT_TOKEN_TO_BE_REPLACED

eMAG hopes to get the opinion of the Hungarian Competition Council over the next two months for the acquisition of Extreme Digital, the market leader… END_OF_DOCUMENT_TOKEN_TO_BE_REPLACED