The intergovernmental agreement between the United States and Romania in the nuclear-civil cooperation field has received the European Commission’s approval, and Romania will start construction… END_OF_DOCUMENT_TOKEN_TO_BE_REPLACED

A system which can save Romania from the packages waste and, at the same time, can ensure fulfillment of obligations in the field towards the… END_OF_DOCUMENT_TOKEN_TO_BE_REPLACED

Romanian Leu was much more stable during the pandemic than the currencies of Central European countries with a similar exchange rate regime, the Czech Republic,… END_OF_DOCUMENT_TOKEN_TO_BE_REPLACED

2017 budget: strange things about the revenues 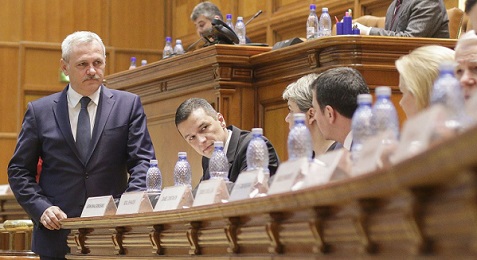 The great undertaking of the 2017 budget execution has been launched, with the presumption of 50 basis points decrease in the current revenues, according to the data from the Ministry of Finance website.

Almost the whole increase of about 15% compared to the previous year would come from the money received from the EU.

We present below some of the most important sources of revenues, to get a picture of what is happening with the public money and specifically from where they come. 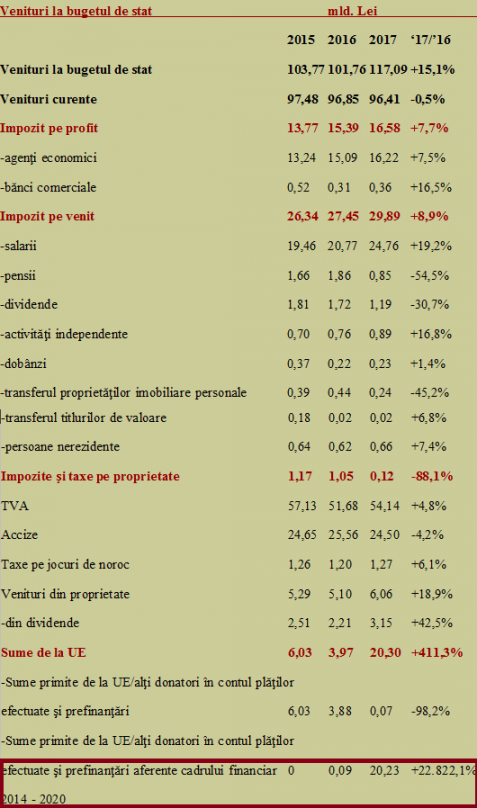 We can see how rising the wages would bring an increase of 4 billion lei to the budget revenues. The increase is spectacular, one fifth in absolute value, even higher than the one-sixth increase of the national minimum wage from 1,250 lei to 1,450 lei; a minimum wage that we will find officially in about half of the employment contracts at the national level.

To find an explanation for overperforming in the rule of three, we can look at the elimination of the threshold of five national average salaries for tax (mainly applied to about 36,000 employees from top management and IT sector). But the effect of the tax evasion increase (in December, a few too many employees earning the minimum wage have been already fired, on paper) has not been measured for sure.

Basically, the increase in property income comes from the massive increase, by administrative means, of the dividend income (+ 42.5%) and also brings almost one billion lei but risks leaving the state companies without resources for investment and modernization.

Quite bizarre for a so-claimed social democratic party, it is introduced a “partial tax amnesty” granted for the dividend income, expected to decrease by over 30% in a year of robust growth, after another year of robust growth. Well, if we cannot collect more money from dividends even when we have such increases, then from what source should we finance the society?

As for the contribution of the banking sector to the state budget revenues, it is hard to say whether we should cry or laugh. On the principle of individual charitable donations from tax, poor financial institutions are going to contribute to the budget only 2% of the contributions of the companies whose money gets through their accounts.

But the funniest joke is about the source of the overall growth in total revenue of the state budget; which would not increase naturally, even from higher collections following the economy advance of 5.2% (!), but strictly because the EU will give us about five times more money this year than last year.

We added together the amounts from the EU granted in 2015, 2016 and 2017 on the two distinct positions from the budget to take account of the change following the transition to the financial framework 2014-2020 and for you not to think that the increase of 22,822.1% (!) from the table would be a gross editing error.

In this “simple” way, increasing sources of revenue could be found to finance the expenditure, a topic to which we will come back.

Taking that into account, we can only hope to achieve the revenue target from the state budget law and thank the European Union for any external support to sustain the revenue growth of a state that remained to stand at its courtesy.

Luca de Meo (foto), the new general manager (CEO) of Renault group, considers that Dacia project proved to be a miracle and that no one… END_OF_DOCUMENT_TOKEN_TO_BE_REPLACED

A former Soviet airbase in central Romania could become a hub for US Air Force operations in south-eastern Europe, where the Pentagon is seeking to… END_OF_DOCUMENT_TOKEN_TO_BE_REPLACED

Nuclearelectrica's Board of Directors has been mandated to initiate proceedings to terminate negotiations with China General Nuclear Power Group (CGN), as well as legal effects… END_OF_DOCUMENT_TOKEN_TO_BE_REPLACED

Romania imported an amount of electricity of almost 796 GWh in the first month of this year, by more than 36% above what it exported… END_OF_DOCUMENT_TOKEN_TO_BE_REPLACED

GFG Alliance has committed to invest one billion euros to upgrade Galati steel plant in order to reduce emissions and increase production. Another EUR 1… END_OF_DOCUMENT_TOKEN_TO_BE_REPLACED

The Transport Ministry, as the Intermediate Body in Transport, approved the financing request for the project "Construction of Sibiu - Pitesti highway", Sections 1, 4… END_OF_DOCUMENT_TOKEN_TO_BE_REPLACED

Lack of trust in authorities, corruption and low living standards are the main reasons why young people leave Romania. The data is part of a… END_OF_DOCUMENT_TOKEN_TO_BE_REPLACED

Romania is the EU country with the fewest cars in terms of the number of inhabitants, according to data recently published by Eurostat. We appear… END_OF_DOCUMENT_TOKEN_TO_BE_REPLACED

The Government is preparing the public for the first measures aimed at avoiding the budget slippage, which would be applied by the PSD-ALDE government. News… END_OF_DOCUMENT_TOKEN_TO_BE_REPLACED

French Prosecutor Jean-Francois Bohnert will be appointed as head of the European Financial Prosecutor's Office, a position for which he was heard on Thursday, 11… END_OF_DOCUMENT_TOKEN_TO_BE_REPLACED

Romania recorded the highest road deaths in the EU also last year, with 96 deaths per one million inhabitants in 2018, almost double the EU… END_OF_DOCUMENT_TOKEN_TO_BE_REPLACED

Sorina Pintea announced on Thursday further new changes that will be brought to the functioning of the health care system, including new rules for employment… END_OF_DOCUMENT_TOKEN_TO_BE_REPLACED

The new order on approval and selection procedures for insolvency practitioners is an important step to a very good direction, industry experts say. ANAF is… END_OF_DOCUMENT_TOKEN_TO_BE_REPLACED