„Worst of both worlds”: Court of Arbitration in Paris decides that CNAIR should pay compensation to contractor of „sunken highway” 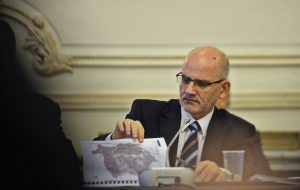 The National Company of Road Infrastructure Administration (CNAIR) will bring an action for the annulment of the partial arbitral award handed down by the International Court of Arbitration in Paris, announced News.ro

The Court ruled on 23 March that CNAIR must pay damages of 83 million lei to Salini Impregilo in the case of Sibiu-Orastie „sunken” highway. Romanian institution said on Tuesday that did not pay and does not have to pay any amount to the Italian company following the decision, which these decisions are not enforceable.

The contract between the former CNADNR and the Italian group Impregilo, which later became Salini-Impregilo, for building the 22 kilometres from lot 3, has been signed in 2011 and terminated in January 2016. In September 2015, the lot has been closed and a segment of several hundred meters has been demolished because of some serious road cracks and bumps.

CNAIR claims that it will bring an action for annulment, the decisions are not definitive and the company should not pay any compensation to Salini-Impregilo.

„So far, CNAIR did not pay and does not have to pay any amount to Salini Impregilo following the CAD decisions, as they are not enforceable”, reads the CNAIR’s press release.