The yield of long-term Romanian government bonds was 4.28% in January 2020, according to Eurostat data. That is well above all the other states of… END_OF_DOCUMENT_TOKEN_TO_BE_REPLACED

Net subscriptions in Romanian mutual funds (the difference between invested and withdrawn amounts) became again positive in 2019 after they had been negative in 2018.… END_OF_DOCUMENT_TOKEN_TO_BE_REPLACED

Romgaz (SNG) announced the start of production in the deep area of Caragele deposit (Buzau), the biggest discovered in the last 30 years and one… END_OF_DOCUMENT_TOKEN_TO_BE_REPLACED

Romania managed again to stand out at the EU level by recording the highest level of the public deficit in the third quarter of 2019,… END_OF_DOCUMENT_TOKEN_TO_BE_REPLACED

Trade deficit – over 50% growth, one quarter to the next: Phenomena, consequences 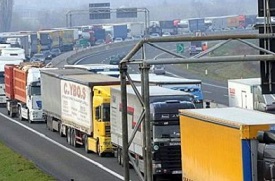 The trade deficit in the second quarter of 2017 was EUR 3,520.7 million, according to the data provided by the INS, which shows a spectacular increase by about 52% compared to the first quarter of the current year.

Moreover, in June, the highest monthly trade deficit has been reached, of nearly EUR 1.4 billion or almost 40% of the entire quarter.

Worryingly, while the growth rate of imports remained unchanged at the middle of the year compared to the end of the first quarter of 2017, respectively 12.4%, exports slowed down visibly and the result related to the beginning of the year declined from 11.5% to 9 6%. This shows a trend that should give food for thought to decision makers and affects the macroeconomic balances.

It is a notable poor performance after the good level achieved in 2014 and we are heading (much too fast) to the levels of the time when we were trying to get out of the economic crisis (see the table).

After exceeding the EUR 1 billion level in March, the monthly trade deficit is heading for a new threshold, of EUR 1.5 billion, which is very likely to be reached following the recent wage and pension increase measures. Both with an annual increase rate of nearly 15% compared to an economic growth that will be somewhere around 5%.

At a 3 to 1 ratio of the income growth to the economic growth, it is very difficult for the domestic production to instantly connect and provide an appropriate offer.

This also explains the shift in consumption to the imported goods once the level of 1,000 euro per month in terms of wage purchasing power has been easily exceeded and the pensions have been arbitrarily increased by 9% in the middle of the year.

The state of play of the foreign trade evolution between January 2016 and February 2017 is as follows: 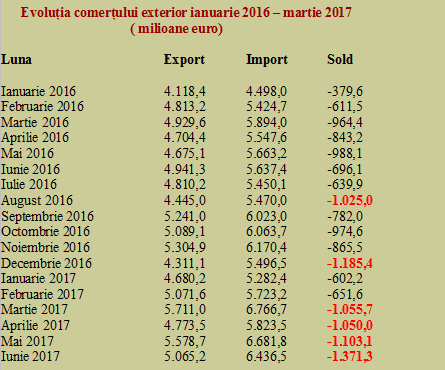 On the extra-community trade side, exports registered amounted to EUR 7.40 billion (24% of total exports) and imports EUR 8.88 billion (23.8% of total imports).

Beware of the exchange rate

In other words, we are witnessing an increased loss of competitiveness in relation to the segment outside the EU compared to the situation not good at all in relation to our colleagues from the same economic bloc. And that in the context of a relative devaluation in relation to currencies such as the zloty or forint from the non-euro part of the EU as well as to euro. The devaluation that has not helped us against the depreciation of the US dollar, which has decreased the price of commodities contracted in this currency.

All in all, the end-of-year situation does not look so good if we fail to quickly get out of the ever-growing trend of strengthening the trade deficit at a higher level than the one-billion-euro monthly benchmark.

To clarify its size, it should be noted in this context that Romania’s total GDP would be estimated around EUR 180 billion in 2017 and the trade deficit at the middle of the year was 3% of GDP and leads to 7% of GDP.

We recover some of it from the service sector but the rest must be financed by foreign investment if we want to maintain the exchange rate. So, with the deterioration of the trade balance, we become increasingly vulnerable to the revenues from services (beware, more than half comes from transportation!) as well as to the availability of others to invest here.

GFG Alliance has committed to invest one billion euros to upgrade Galati steel plant in order to reduce emissions and increase production. Another EUR 1… END_OF_DOCUMENT_TOKEN_TO_BE_REPLACED

The Transport Ministry, as the Intermediate Body in Transport, approved the financing request for the project "Construction of Sibiu - Pitesti highway", Sections 1, 4… END_OF_DOCUMENT_TOKEN_TO_BE_REPLACED

Lack of trust in authorities, corruption and low living standards are the main reasons why young people leave Romania. The data is part of a… END_OF_DOCUMENT_TOKEN_TO_BE_REPLACED

Romania is the EU country with the fewest cars in terms of the number of inhabitants, according to data recently published by Eurostat. We appear… END_OF_DOCUMENT_TOKEN_TO_BE_REPLACED

The Government is preparing the public for the first measures aimed at avoiding the budget slippage, which would be applied by the PSD-ALDE government. News… END_OF_DOCUMENT_TOKEN_TO_BE_REPLACED

French Prosecutor Jean-Francois Bohnert will be appointed as head of the European Financial Prosecutor's Office, a position for which he was heard on Thursday, 11… END_OF_DOCUMENT_TOKEN_TO_BE_REPLACED

Romania recorded the highest road deaths in the EU also last year, with 96 deaths per one million inhabitants in 2018, almost double the EU… END_OF_DOCUMENT_TOKEN_TO_BE_REPLACED

Sorina Pintea announced on Thursday further new changes that will be brought to the functioning of the health care system, including new rules for employment… END_OF_DOCUMENT_TOKEN_TO_BE_REPLACED

The new order on approval and selection procedures for insolvency practitioners is an important step to a very good direction, industry experts say. ANAF is… END_OF_DOCUMENT_TOKEN_TO_BE_REPLACED

Romania lost to Estonia in the final vote to get the non-permanent member position within the UN Security Council for the period 2020-2021. On Friday,… END_OF_DOCUMENT_TOKEN_TO_BE_REPLACED

eMAG hopes to get the opinion of the Hungarian Competition Council over the next two months for the acquisition of Extreme Digital, the market leader… END_OF_DOCUMENT_TOKEN_TO_BE_REPLACED