Strengths and weaknesses of Romania’s foreign trade. How European integration with the economy helped us or not 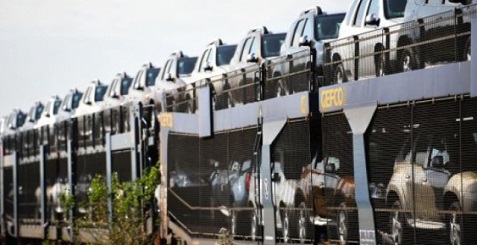 Romania’s chronic trade deficit reached in 2015 about EUR 8.4 billion or 5.2% of the GDP recorded in the official statistics. This year it is heading to 6% of the GDP, which asks for an analysis of the foreign trade’s strengths and weaknesses referring to the effects that privatization and foreign investment had against the background of the integration of domestic economy into the international production chains.

Beyond the deficit or surplus recorded for various product categories, is used the Grubel – Lloyd index with this regard, introduced in 1972 to measure the degree of intra-industry specialization (process in which a country focuses on certain types of complementary goods to those made in other country and exchanges intensify within the same industry).

The closer to zero this index is, the more inter-industry the foreign trade is (the classic case of a country with no fabrics production that produces wine and another country that has no wine and offers fabrics in exchange). The closer to one the index is, the more we can talk about a modern intra-industry specialization. In this case, it is more efficient for two countries that excel in the same production area to focus on certain parts or types of finished products and trade with each other complementary assortments.

These are of course the extreme cases.

In practice, we find different situations having actual outcomes transposed in the final trade balance, depending on how far the integration reached or whether it was more advantageous or not for each area of activity. To see Romania’s situation after nearly a decade since the EU accession, we have selected some 2015 final official data (see table).

It can be seen how exchanges of food and beverages mainly for household show an inter-industry arrangement with a not surprising upper position for vegetables and fruit, as we obviously can only export certain assortments and must import citrus and other fruit from the southern region. The same as we export and would not actually make sense to import fuel, given the production facilities still exiting in the country.

Our great advantage, in an area where we are strongly enough integrated with the European economies, is the sector of transportation equipment, subassemblies, parts and accessories that gives us a plus tending to reach five billion euro, due to the specialization on an area of average cost and good quality. This plus is unfortunately wiped out by the deficiencies from the non-transportation capital goods, parts and accessories.

We have integrated even more on this part, but have so weak results that dissolve the advance mentioned above that otherwise would have been sensational. As they say, the difference between Germany and Romania is that the first one produces not only cars but also machineries. Not necessarily machinery in general (see the sectoral deficit which is at a minimum level of just EUR 72.4 million for an exchange totaling more than EUR 6.7 billion) but strong specialized machinery for specific industries on which we have not managed to become part of the intra-industry specialization (hence a deficit of EUR 1.3 billion). 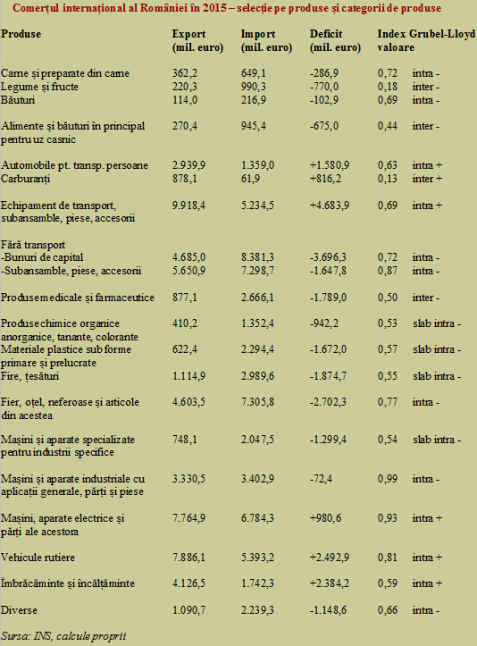 However, the deficit is less than half the level registered after the sector of ferrous and non-ferrous industry and related products has been plundered despite of an index of integration still quite good and brought into the situation to support a deficit of EUR 2.7 billion per year.

What systematically sends us on minus is the chemicals related category, poorly integrated where we lost ground right across the board against the international competition. This is a kind of ironic situation, given the academician we had during the communist era who, whatever they say, has pushed for the development of this key branch of the heavy industry without which we could not conceive the prosperity of the country.

An alarming phenomenon is that the pharmaceutical and health products industry moved very far from high values to low values of the G-L index and is already heading to the inter-industry trade category, which means a dependence on the external market for providing the medicines that population needs. This dependence has strategic implications related to the national security that go far beyond the mere money deficit.

Of course, there is no question to produce everything, as in last years of socialism, but we must do something so that others to depend on us at least to a similar extent to which we depend on them. Otherwise, human costs will be huge in the event of insufficient resources to cover the need in natural disasters or epidemics extended internationally.

Back to the heavy industry, you can see how the machinery, electrical equipment and parts sector, integrated surprisingly well externally, reached an extremely high G-L index and a double level of international trade compared to the general industrial machinery, not to mention that it positively contributed almost one billion euros to the trade balance.

Lastly, we put together (to see how they translate into the foreign trade data after establishing the product categories) the pluses for the road vehicles (this category reached a fairly advanced integration, with an index of 0.81) and clothing and footwear (this category maintained at 0.59). Great surprise, they are all around the same point, as there is nothing to choose between EUR 2.5 billion from road vehicles or EUR 2.4 billion net from the superstar sectors of the light industry.

Here we have the gist of the story. For the main economic categories (if we take a step back to avoid losing sight of the forest for the trees), contrary to the stereotypes publicly spread, deficits are massively arising from the segments of capital goods (46% of the deficit) and especially the intermediate goods (76% of the deficit overall).

In the reality beyond the immediate and permanent visual impact, consumer goods do not contribute but an insignificant deficit of balance (9% of total) and the degree of integration with the overall global economy is very high (i.e. 0.97, namely very close to the maximum value, theoretically). It is not quite appropriate to use the Grubel – Lloyd index on such a scale, but the figures offer us an effective overview of the effects of the Romanian economic integration with the external economies.

Noteworthy is that the negative outcome in hard currency for the foreign trade essentially depends on the so-called transfer prices of intermediate goods, which are the prices for transactions between companies from the same group which are part of a given production chain. The correctness of these prices is more difficult to track and evaluate than in the case of finished products.

Especially that more than half of world trade does not take place on a free market itself, but between affiliates and the anticipated tax solutions (which would explain to some extent the low budget revenues problem), available in theory and widely used in advanced economies, are completely missing in our case.

Contrary to the deep-rooted perception that some countries mostly sell certain goods in exchange for goods from other countries, in fact, the intermediate products (subsequently included in the composition of finished goods) represent the bulk of the international trade (specifically, in Romania’s case, that means 60% of exports and 62% of imports in 2015).