Stop comparing yourself with Poland and Hungary / BNR report in Senate, boycotted by PSD: Stop playing with fiscal policy, do not expect everything from monetary policy. Liviu Dragnea’s reaction 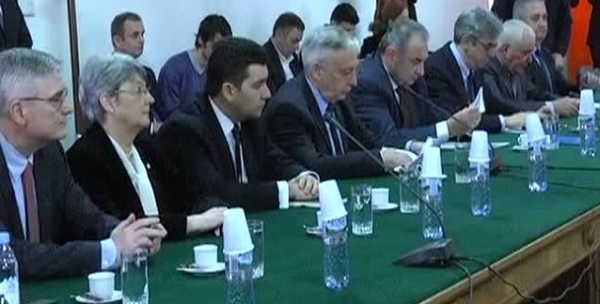 BNR’s position is that unless the monetary policy is supported by fiscal policy, it has no other option but to increase interest rates even further if macroeconomic deficits get worse.

Also, the BNR Board of Directors „does not accept political pressures, even though positions might differ within its debates.”

BNR’s priority is, according to its statute, „financial stability, the most valuable asset that central bank can provide to the society,” Mugur Isarescu said.

BNR Board of Directors, headed by Governor Mugur Isarescu and First Vice Governor Florin Georgescu, was invited to the Senate on Thursday to explain central bank’s policies and sustain its alarm signals launched to the political class. The meeting was boycotted by PSD senators, who were not even interested in listening to guests’ explanations, for a reason that Liviu Dragnea explained later: „They might have done that for a reason.”

The increase in the monetary policy rate was the central bank’s response to an accelerated rise in inflation, driven by fundamental factors that cannot be controlled by BNR.

„We have no power over administered prices or fiscal policies, besides the discussion or dialogue, and finding a mix to maintain the economy balance under control. (…) The factor we can control is a part of the aggregate demand that we influence with indirect instruments,” said the BNR Governor during the debate at the Senate.

Mugur Isarescu reminded that „in the IMF’s latest report, there is a phrase saying that unless the monetary policy is supported by fiscal policy, the National Bank has no other choice but to further increase interest rates„.

The Governor added that „we can bring the inflation rate to 3.5% only with the fiscal policy support.”

Mugur Isarescu has again listed the „adverse shocks” that generated inflation and were described in the most recent BNR inflation report:

„In the absence of a prompt monetary policy reaction, there would have been a risk of the inflation to be restored again within the range associated with the target, and would have had harmful economic and social effects,” Mugur Isarescu said.

Stop comparing yourself with Poland and Hungary

BNR has aggressively increased its policy interest rate twice in two months from 1.75 to 2.25%, because inflation had an aggressive development from which other countries in the region have not suffered, according to the BNR official:

Also, while the current account deficit is at „risk of deepening” in Romania, the countries mentioned have a surplus.

This is one of the reasons why the Romanian leu suffers from depreciation pressures, but the Czech crown, the Polish zloty and the Hungarian forint are stable.

„The pressure on the national currency depreciation is another argument for strengthening the monetary policy. The exchange rate stabilization cannot be obtained at any interest rate,” reminded Mugur Isarescu.

As for the new intergovernmental committee on the Eurozone accession, BNR Governor signed the Emergency Ordinance draft because it is more than meeting some criteria:

obtaining the national consensus, including from political parties

„I was in the situation to obtain such national consensus when I was prime minister and the question has been raised on the EU accession and I know it is not easy at all,” the BNR Governor said.

Working with Government: We do not accept political pressures

„The BNR Law says we have to support the Government’s policy, but we also respect our obligation to ensure the financial stability,” Mugur Isarescu reminded.

„You have in front of you the members of the BNR Board of Directors, whom the Parliament has appointed. When we meet, we can have different positions, but that does not mean that we accept political pressures. (…) We act responsibly based on econometric arguments,” Mugur Isarescu answered the question of a Senate member.

„Attention, economic realities put you against the wall, no matter how much some people would say they have the popular vote behind,” Mugur Isarescu also said.

Moreover, the euro adoption „is not possible without the adoption of about 20 amendments to the BNR Law, including those that strengthen central bank’s independence from political interests,” added the BNR Governor.

The Governor of the National Bank of Romania wished to mention „in front of the Committee and in front of those who hear us that we are trying for our vision on inflation this year not to be optimistic. (…) We are neither pessimistic, but realistic. We believe that we can control things, but under certain conditions, we have presented them here,” concluded Mugur Isarescu.

Liviu Dragnea’s reaction: I shall study the Governor’s letter when I have time, we are for debate…

„I spoke yesterday (Wednesday, editor’s note) to the BNR Governor. He called me and told he had sent me an answer to the letter. I am going to study it today or tomorrow, because I did not have time and then I will also make public what I sent him, in detail. The monetary policy must be implemented through a constant dialogue with the Parliament and the Government. We are willing to discuss why inflation has increased and how that influences the refinancing policy and what impact it has on the economic activity overall,” said Liviu Dragnea on Thursday.

At Thursday’s meeting, only the president of the committee, liberal Florin Citu, Cristian Lungu (PMP) and Daniel Zamfir, who was excluded from PNL on Wednesday, took part in the committee, out of 11 members.

„They might have had a reason. What boycott? We do not boycott BNR. We have been supporting it for 28 years. I understand that there is stability, it is the same governor, but the elected PSD members, as they did not see the answer to the letter and not knowing the BNR’s intention to be part of a support program, did not have trust”, Liviu Dragnea added.

Government policies have created distrust over the past year in the funding markets, therefore funding costs have more than doubled compared to other countries in the region.

The same policies have deeply imbalanced the trade balance by stimulating consumption and imports, brought the budget deficit to the extreme, pushed the current account deficit beyond any control, brought indicators to values reached during the economic crisis, have “broken” the exchange rate and inflamed the inflation.