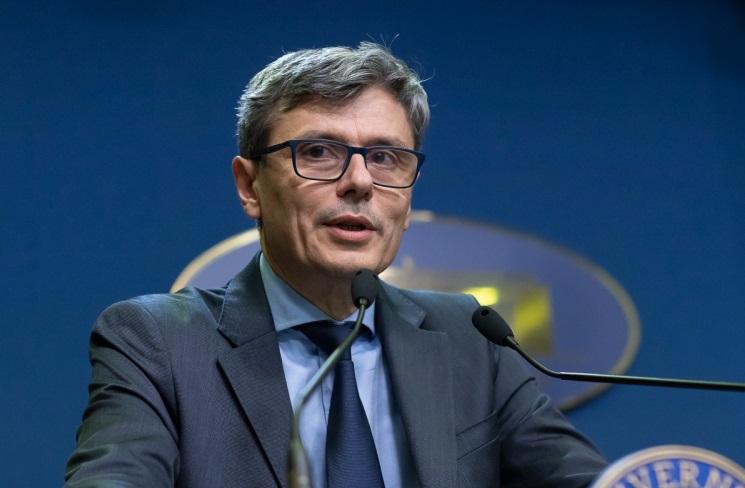 Romgaz (SNG) will submit an offer to take over ExxonMobil’s participation in the concession for the exploitation of natural gas from Neptun Deep perimeter in the Black Sea, before the expiration of the current two-month term of the Romanian company’s acting general manager, according to the Energy Minister Virgil Popescu (photo).

At the same time, the selection and finalization procedure for Romgaz’s directorate and board of directors will be started, according to the Emergency Ordinance on corporate governance of state-owned companies – said Virgil Popescu at the Black Sea Online Forum conference organized by Financial Intelligence.

However, „the main concern at the moment is the acquisition of Exxon’s 50% stake in Neptun Deep,” the energy minister was quoted as saying by Agerpres.

The reserves of the deep-sea Neptune field in the Black Sea are estimated at 42 – 84 billion cubic meters of gas, which is 4 – 8 times more than Romania’s current annual production. The Ministry of Economy would be satisfied if the exploitation of natural gas in Neptun Deep perimeter in the Black Sea would start even in 2025, according to a statement that the Secretary of State Dan Dragos Dragan made at the end of last year.

The two-month „provisional” term of Romgaz’s current general manager, Aristotle Marius Jude, will expire on 12 April. He took over the mandate from another acting manager, Daniel Pena, who replaced Adrian Volintiru, fired without any explanation in January.

„I understood that there is this fear in the market regarding the management of Romgaz. At the moment, the general manager, who is appointed for a period of two months, which covers exactly the bid submission for the purchase of Exxon package, as well as the board of directors, the economic director, all Romgaz experts have the capacity to develop this project. I don’t know if anyone in Romania has deep-sea expertise, but I propose to give this chance to those from Romgaz. I believe that Romgaz has the capacity to manage this project”, said Virgil Popescu.

Of course, such transactions are not solely covered by profit or by debt support. However, the state should give up the dividends it expects from Romgaz in a year when the forecasted budget deficit is already 7.16% of GDP.

Last year, the state received dividends of over RON 434 million (USD 109 million) from Romgaz and is waiting for its right to another RON 24 million to be confirmed in court, according to a correction resulting from “an economic and financial inspection”, according to Romgaz (SNG) report for the last year.

The new offshore law must be adopted in this parliamentary session

For OMV Petron to invest in Neptun Deep operation, under a possible partnership with Romgaz, it is necessary to keep the promise of amending the Offshore Law. This regulation still imposes provisions considered unacceptable by concessionaire oil companies holding perimeters in the Black Sea, after some other provisions, from OUG 114/2018, were repealed.

Virgil Popescu reiterated, on Thursday, that the Ministry of Energy is working during this period to amend the Offshore Law and expressed his hope that the new law will be voted in this parliamentary session.

OMV announced, in early February, that it will make the final investment decision in operating Neptun Deep in the first three months of 2022. „This means that the Offshore Law will have to be adopted by the Romanian Government in the first half of 2021,” said Johann Pleininger, Upstream Director of OMV Group, quoted by S&P Global Platts.

Romania missed, two years ago, the chance for ExxonMobil & OMV Petrom to make the final investment decision in the exploitation of the natural gas in Neptun Deep, as a result of the introduction of taxes and regulations that concessionaires considered unacceptable.

Moreover, the change in regulations after granting the licenses does not meet the predictability requirements of such long-term investors.

Meanwhile, the natural gas market has deteriorated, as well as the assets of oil companies, which are only interested in investing in the exploitation of the world’s largest resources.

And time is running out to the detriment of the project, all the more so as the big international financing organisations (EBRD, EIB) no longer support fossil resource projects and other big financing entities are joining this trend.