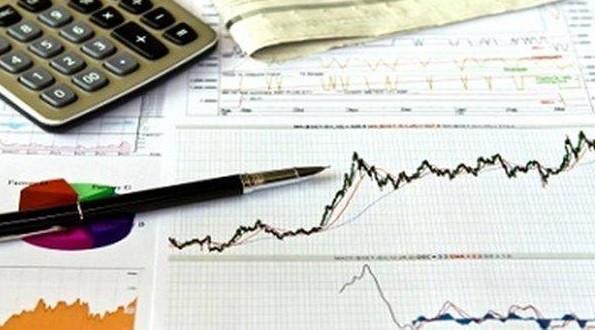 Romania’s economy ranks 16th in the European Union and represents 1.23% of the EU economy, according to the data published by Eurostat for 2017, on GDP expressed in euro (nominal values).

We have surpassed Greece, and Portugal and the Czech Republic are ahead of us, at an accessible distance in the coming years.

Noteworthy, our advance expressed in euro was 10.7% last year, compared to just 6.9% GDP growth in real terms. That means we would have benefited from the significant increase in the purchasing power in euro, even without significant income increases in RON.

Maintaining the average exchange rate at the level of 4.5681 lei/euro had an essential role in this respect.

That is precisely why the situation will not repeat in 2018, even if the estimate of the National Strategy and Prognosis Commission regarding the achievement of the threshold of EUR 200 billion will become reality.

The increase in euro would be in this case 6.4%, much closer to the increase estimated by CNSP in real terms (6.1%), after the average exchange rate went up to 4.65 lei/euro.

To have the right picture of our country’s position as an economic force in the EU, we present the shares of the European countries in the EU GDP expressed in euro, according to the latest data available, with the mention that the provisional and semi-definitive data previously published were recalculated (see table). 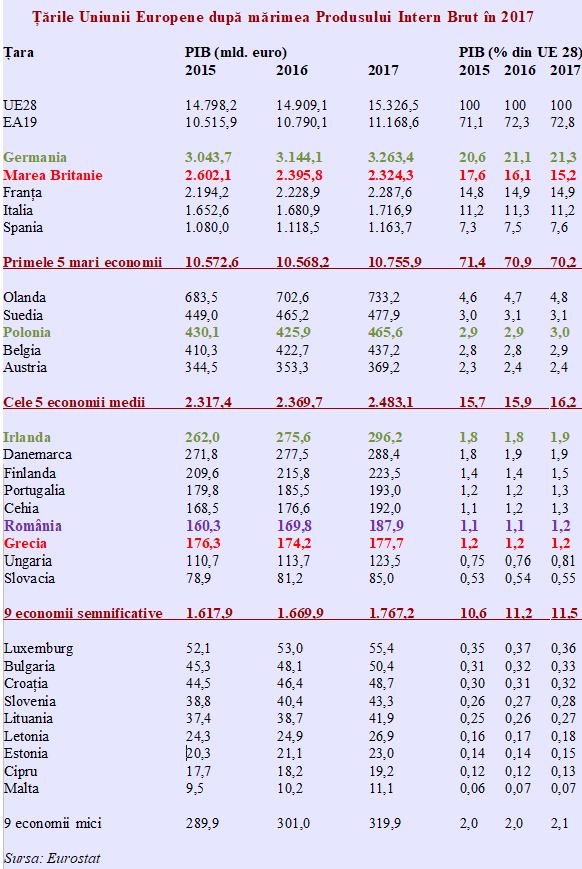 At EU level, there is a strong concentration of the economic power in the five largest countries, with a share of over 70% of total GDP, but decreasing because of the visible deterioration of the UK position, also influenced by the depreciation of the pound. Consequently, France has come close to the island economy, and Germany had its lion’s share in this new distribution of shares.

The Eurozone has a larger share within the Union than the five big economies, namely 72.8%, and sets the general tone of the growth rhythm. To keep in mind, 90% of the GDP growth at the EU level was achieved in the Eurozone (EUR 378.5 billion in a total increase of EUR 417.4 billion last year), with the UK decline having offset most of the advance in the central and eastern EU.

After the major economic powers, there are five other countries with GDP values ranging between 2% and 5% of the EU’s total GDP, and they account for almost a sixth of the economic output. All these five countries mean just a little more than the UK or France in terms of share of GDP. It is worth noting that Poland has integrated into this select club, a country which got close to Sweden and targets the 7th position as a European economic power.

Where our country is positioned: now and maybe in the future

Romania enters the second half of the platoon comprising the nine countries which we have called significant because they represent between 0.5% and 2% of the EU’s GDP. Given the relatively small differences compared to the economies that are ahead of us, an advance to the middle of the EU ranking (14th position), would be accessible in the medium term if we manage to maintain macroeconomic balances.

As for the effort to catch up, by the middle of this century, with other states, it is rather out of the question (except for Finland, at the very least).

On the contrary, Ireland, helped by the relocation of some big companies in the anticipation of Brexit, surpassed Denmark and climbed from the 15th to the 11th position over the last four years.

Finally, the nine countries remained below the threshold of 0.5% of the EU GDP, they cumulate together less than a tenth of the German economy, being less significant for the overall outcomes.

To be noted, Bulgaria and Croatia, along with the three Baltic states, can barely represent, roughly, as much as the Romanian economy.