The yield of long-term Romanian government bonds was 4.28% in January 2020, according to Eurostat data. That is well above all the other states of… END_OF_DOCUMENT_TOKEN_TO_BE_REPLACED

Net subscriptions in Romanian mutual funds (the difference between invested and withdrawn amounts) became again positive in 2019 after they had been negative in 2018.… END_OF_DOCUMENT_TOKEN_TO_BE_REPLACED

Romgaz (SNG) announced the start of production in the deep area of Caragele deposit (Buzau), the biggest discovered in the last 30 years and one… END_OF_DOCUMENT_TOKEN_TO_BE_REPLACED

Romania managed again to stand out at the EU level by recording the highest level of the public deficit in the third quarter of 2019,… END_OF_DOCUMENT_TOKEN_TO_BE_REPLACED

Romania’s competitiveness on the single market, from foreign trade point of view: even Bulgaria has come to generate a deficit for us 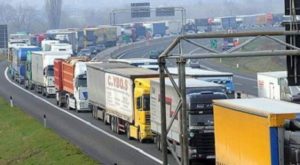 According to data released by Eurostat, half of the EU member countries concentrate 70% of Romania’s deficit in foreign exchanges registered in 2018, which reflects a major competitiveness deficit.

Somehow surprisingly, the top two positions in the ranking of countries with which we have a negative balance are, by far, Hungary and Poland, followed at a big distance by the Netherlands and Austria.

Behind them, Belgium came a long way from behind and surpassed our main trade partner, Germany, while the results with the Czech Republic and especially Spain have deteriorated at a worrying pace from one year to the next. The only notable positive developments have been recorded with Slovakia and our second largest trade partner, Italy.

So, not so much Western economies cause us problems, but rather those former colleagues of the socialist bloc, compared to which we can only export at worryingly low proportions compared to imports (51.1% coverage ratio with Hungary and only 42.9% with Poland).

Moreover, we found ourselves on an increasing tendency to register a deficit with Bulgaria, a country over which we traditionally had a surplus (from the small deficit of EUR 54.1 million in 2017 to EUR 195.6 million in 2018). 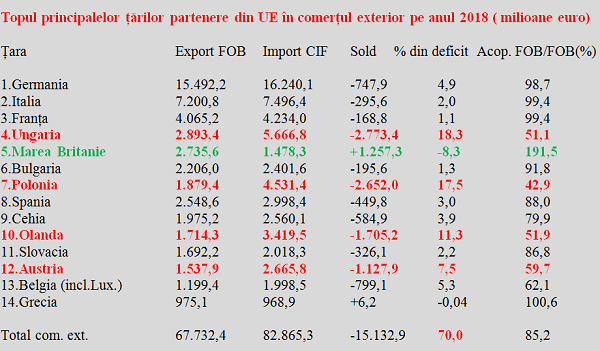 In the West, smaller economies are those making us bigger problems, and with this view it is worth emphasising the significant deficits with The Netherlands (about –EUR 1.7 billion at a level of export coverage ratio of imports only slightly above 50 percentage points), Austria (EUR 1.1 billion and 60%, respectively), plus Belgium (about – EUR 800 million, or about five times more than its neighbour France, at a coverage ratio of 62%). 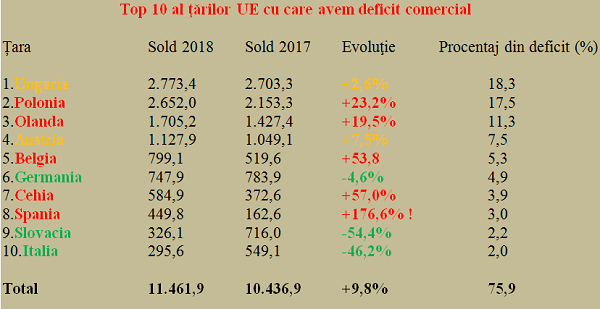 To be noted, last year, trade balance with a country of major importance for our foreign trade, France, went from the positive to the negative range (from + EUR 231.6 million in 2017 to –EUR 168.8 million in 2018) and the consequence was that only this change from plus to minus has generated almost one fifth of the increase in the trade deficit.

Only better results in relation to Slovakia and Italy have significantly limited the worsening of the situation overall. Although the negative result with the first ten partners from the EU has increased by about one billion euros or about half of the trade deficit increase in 2018, the growth rate was slightly below 10% that is lower than the overall deterioration, of about 17%.

Finally, it is worth mentioning the important negative effect of Brexit for Romania, because the UK was the only large European state with which we had not only a consistent surplus but also massively increasing (from EUR 873.3 million in 2017 to EUR 1,257.3 million in 2018, that is, an additional amount of nearly EUR 400 million or 44% from one year to another – basically, we could call it the “Duster effect”)

GFG Alliance has committed to invest one billion euros to upgrade Galati steel plant in order to reduce emissions and increase production. Another EUR 1… END_OF_DOCUMENT_TOKEN_TO_BE_REPLACED

The Transport Ministry, as the Intermediate Body in Transport, approved the financing request for the project "Construction of Sibiu - Pitesti highway", Sections 1, 4… END_OF_DOCUMENT_TOKEN_TO_BE_REPLACED

Lack of trust in authorities, corruption and low living standards are the main reasons why young people leave Romania. The data is part of a… END_OF_DOCUMENT_TOKEN_TO_BE_REPLACED

Romania is the EU country with the fewest cars in terms of the number of inhabitants, according to data recently published by Eurostat. We appear… END_OF_DOCUMENT_TOKEN_TO_BE_REPLACED

The Government is preparing the public for the first measures aimed at avoiding the budget slippage, which would be applied by the PSD-ALDE government. News… END_OF_DOCUMENT_TOKEN_TO_BE_REPLACED

French Prosecutor Jean-Francois Bohnert will be appointed as head of the European Financial Prosecutor's Office, a position for which he was heard on Thursday, 11… END_OF_DOCUMENT_TOKEN_TO_BE_REPLACED

Romania recorded the highest road deaths in the EU also last year, with 96 deaths per one million inhabitants in 2018, almost double the EU… END_OF_DOCUMENT_TOKEN_TO_BE_REPLACED

Sorina Pintea announced on Thursday further new changes that will be brought to the functioning of the health care system, including new rules for employment… END_OF_DOCUMENT_TOKEN_TO_BE_REPLACED

The new order on approval and selection procedures for insolvency practitioners is an important step to a very good direction, industry experts say. ANAF is… END_OF_DOCUMENT_TOKEN_TO_BE_REPLACED

Romania lost to Estonia in the final vote to get the non-permanent member position within the UN Security Council for the period 2020-2021. On Friday,… END_OF_DOCUMENT_TOKEN_TO_BE_REPLACED

eMAG hopes to get the opinion of the Hungarian Competition Council over the next two months for the acquisition of Extreme Digital, the market leader… END_OF_DOCUMENT_TOKEN_TO_BE_REPLACED