Romania 2017 – the lowest tax revenues in the last 25 years. Ionut Dumitru: We are on a certain path towards dissolution 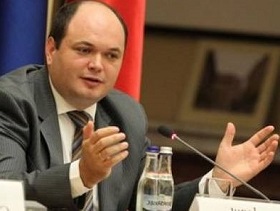 Romanian citizens are ready again to fall into politicians’ traps who know that people do not want to pay taxes and then promise to cuts taxes, according to a statement by Ionut Dumitru (foto), Chairman of the Fiscal Council, during the annual conference of the Association of Financial and Banking Analysts of Romania (AAFBR), held Tuesday at the National Bank of Romania (BNR).

„Romania might need a new kind of social contract, because it is clear that we cannot have social assistance for 20 million Romanian with the resources provided by five million employees,” said Ionut Dumitru.

The chairman of the Fiscal Council asserted that, „unlike a liberal state, where taxes are low, but citizens understand (they pay them and do not ask for social assistance, editor’s note), in our case taxes should be low, but also accompanied by social assistance,” added Ionut Dumitru.

On the other hand, public finances are going through a sharp deterioration process, according to the data presented by the Chairman of the Fiscal Council at the AAFBR conference.

Romania will have in 2017 the lowest revenues from taxes in the last 25 years, equal to 25.4% of GDP, below the European average of 40% of GDP, because of the cuts in taxes adopted by the new Tax Code. The new salary increases were not included in this calculation and they will deepen the problem – explained Ionut Dumitru.

„If we go on with this approach, we are on a certain path towards the dissolution of the state. A state with very low revenues cannot survive,” emphasized the Chairman of the Fiscal Council.

One of the effects of the unsustainable political promises already shows.

Romanian state pays 11 billion lei to the public-sector employees who obtained in court the decision for recovering some financial rights they lost because of some „legislative hesitations”, including the salary increase in education by 50%, approved in 2008, which was not applied anymore, the Chairman of the Fiscal Council, Ionut Dumitru, also said on Tuesday.

„There are very little discussions about the fact that the state budget has paid enormous amounts in the recent years, as result of the final court judgments in favour of the employees from the public sector who went to court for various salary rights or cut bonuses and won compensations, including for the 50% increase in education that has not been applied anymore. Nine billion lei were paid so far and we have to pay the remaining amount up to 11 billion lei. Nobody answered the question: why should the budget pay these 11 billion lei, which is not a small amount, for a legislative hesitation or something like that, „said Ionut Dumitru.

Wages are high in the central administration and low, but numerous, in the local government structure.

„Wages are high in the central public administration. If we look on the ministries’ websites, as there is a Government Ordinance from 2010 that forces them to publish the salaries, we even see average net salaries of 1,500 EUR. In the local government structure, salaries are very low, but there we have a problem with the number of employees. There are municipalities in charge of 1,000 inhabitants that have 30 employees, that’s true, very poorly paid, with minimum wage „, said Ionut Dumitru.

The wages grow much faster in the public sector than in the private sector, by 25% in September 2016, compared to September 2015, so these salary expenses reached 7.7% of GDP.