The general consolidated budget registered in the first half of the current year a deficit of about RON 45 billion, equivalent to 4.2% of the… END_OF_DOCUMENT_TOKEN_TO_BE_REPLACED

At the European level, there is an agreement to introduce a “modest” tax on disposable plastic, a first source of income to support the repayment… END_OF_DOCUMENT_TOKEN_TO_BE_REPLACED

Long-term interest rate for Romania fell by almost one percentage point in just two months, according to data released by Eurostat. After increasing up to… END_OF_DOCUMENT_TOKEN_TO_BE_REPLACED

Budgetary and institutions’ operational constraints generated by the pandemic have subjected the Romanian tax system to significant tensions, which proved its limits, notes the international… END_OF_DOCUMENT_TOKEN_TO_BE_REPLACED

Research domain: if private sector does not finance it, state does not stimulate it. A few comparisons with other countries from East being in this suffering 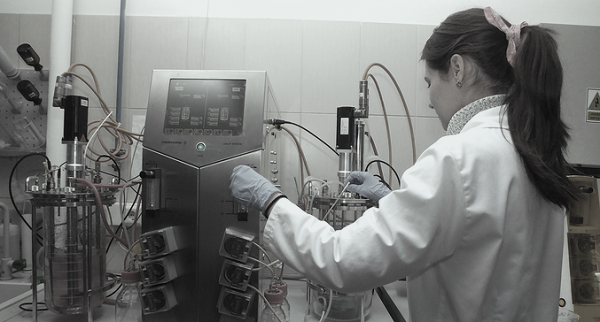 Romania ranked last year second to last among the EU member states in terms of R&D expenditure as a share of GDP. With only 0.48%, our country recorded in terms of allocations to this field less than a quarter of the EU average (2.03% of GDP).

Paradoxically, though, we rank first in terms of government expenditure share in total research expenditure, which indicates a major suffering in the private sector.

We remind that the target set at the European level in the strategy for 2020 is 3% of GDP. Only two countries have reached this level, but it is worth noting the sustained effort made by Germany (+ 0.48% of GDP). The European locomotive increased the R&D spending by an impressive EUR 33.6 billion or + 57% over the last ten years, which explains, to a large extent, the German economic success.

At the opposite end, we have the situation in Finland, which has fallen from more than 3% of GDP below this level (although it maintained the nominal expenditure level somewhere below EUR 6 billion annually) and faces a not very happy economic situation. From here, we can see that maintaining the pace of growth in the R&D sector is essential and the capping costs, even in relation to the competition from other countries.

In order to get a synthetic idea of the gaps separating us from the European practice, we point out that Romania should allocate 12 times more to R&D than last year, to reach the target set for 2020, 8 times more to reaches the EU average and 4 times more to equal Poland’s level.

In the context, it should be stressed that Slovenia has achieved almost the EU average (it has reached the 2% of GDP threshold), the Czech Republic has been the strongest in the last ten years, placing itself immediately after the UK and Estonia got closer in terms of percentage of GDP to Italy. Even Bulgarian neighbours, who started at the same level with us at the moment of the EU accession, went up strongly (+ 0.33%, not + 0.03% like us), tripling the amounts allocated to the research field. 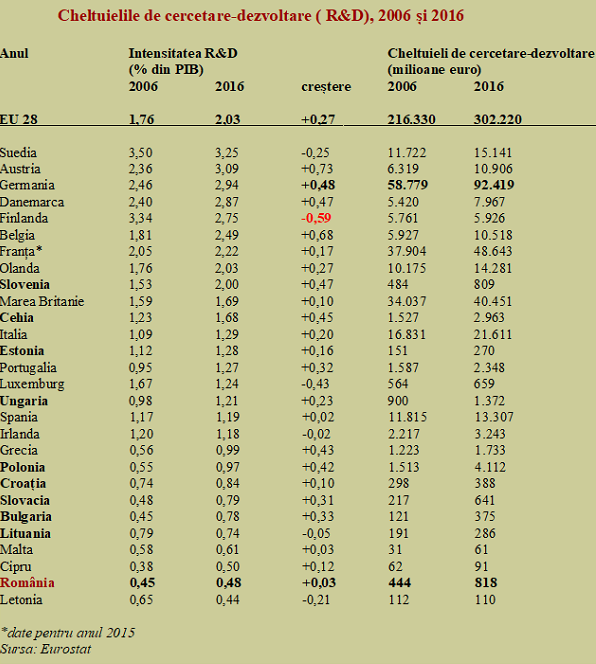 Paradoxically, we are champions of the government sector share, with 33% of the total R&D spending but we are lacking in terms of higher education (11% compared to an EU average of 23%), with nominal values anyway very low if we consider the reporting base, affected by the low interest of the private sector.

By contrast, Slovenia (76%), Hungary (74%) and Bulgaria (73%) form the ranking of top countries where the private sector has the largest share in R&D spending (so not so much the state allocations are the key, but the creation of a stimulating environment for this type of business), which should give us food for thought.

In fact, research and development are very much in pain at the level of the Romanian private initiative and the systematic and methodical integration into the production processes is only an ambition. With only a few large centres of excellence created with some investment from multinationals it cannot be developed an economic sector increasingly important in this century, and without which we shall not be able to propagate the significant increase in the value added in the economy.

Alternately, we shall (possibly) obtain quantity in vain based on technologies and materials designed by others (by using the increasingly weaker asset of a relatively cheap labour), because we shall not be able to come up with the qualitative leap absolutely necessary for the sustainable income growth to the Western standard. With less than half a percent of GDP allocated to research, we cannot have expectations, despite the high economic growth of the moment.

It is a subject almost entirely lacking from the public debate.

Strategies for the country development abound in super offers for consumption, quantitative increases. But they do not bring incentives to the private sector for developing high added value products and services. That can only come from massive investment in R&D.

Luca de Meo (foto), the new general manager (CEO) of Renault group, considers that Dacia project proved to be a miracle and that no one… END_OF_DOCUMENT_TOKEN_TO_BE_REPLACED

A former Soviet airbase in central Romania could become a hub for US Air Force operations in south-eastern Europe, where the Pentagon is seeking to… END_OF_DOCUMENT_TOKEN_TO_BE_REPLACED

Nuclearelectrica's Board of Directors has been mandated to initiate proceedings to terminate negotiations with China General Nuclear Power Group (CGN), as well as legal effects… END_OF_DOCUMENT_TOKEN_TO_BE_REPLACED

Romania imported an amount of electricity of almost 796 GWh in the first month of this year, by more than 36% above what it exported… END_OF_DOCUMENT_TOKEN_TO_BE_REPLACED

GFG Alliance has committed to invest one billion euros to upgrade Galati steel plant in order to reduce emissions and increase production. Another EUR 1… END_OF_DOCUMENT_TOKEN_TO_BE_REPLACED

The Transport Ministry, as the Intermediate Body in Transport, approved the financing request for the project "Construction of Sibiu - Pitesti highway", Sections 1, 4… END_OF_DOCUMENT_TOKEN_TO_BE_REPLACED

Lack of trust in authorities, corruption and low living standards are the main reasons why young people leave Romania. The data is part of a… END_OF_DOCUMENT_TOKEN_TO_BE_REPLACED

Romania is the EU country with the fewest cars in terms of the number of inhabitants, according to data recently published by Eurostat. We appear… END_OF_DOCUMENT_TOKEN_TO_BE_REPLACED

The Government is preparing the public for the first measures aimed at avoiding the budget slippage, which would be applied by the PSD-ALDE government. News… END_OF_DOCUMENT_TOKEN_TO_BE_REPLACED

French Prosecutor Jean-Francois Bohnert will be appointed as head of the European Financial Prosecutor's Office, a position for which he was heard on Thursday, 11… END_OF_DOCUMENT_TOKEN_TO_BE_REPLACED

Romania recorded the highest road deaths in the EU also last year, with 96 deaths per one million inhabitants in 2018, almost double the EU… END_OF_DOCUMENT_TOKEN_TO_BE_REPLACED

Sorina Pintea announced on Thursday further new changes that will be brought to the functioning of the health care system, including new rules for employment… END_OF_DOCUMENT_TOKEN_TO_BE_REPLACED

The new order on approval and selection procedures for insolvency practitioners is an important step to a very good direction, industry experts say. ANAF is… END_OF_DOCUMENT_TOKEN_TO_BE_REPLACED