The Ministry of Public Finance (MFP) proposes to regulate a simplified alternative procedure for granting a payment rescheduling of up to 12 months, for the… END_OF_DOCUMENT_TOKEN_TO_BE_REPLACED

Romania’s economy will contract by 4.8% of GDP this year, according to the revised forecast of the International Monetary Fund (IMF), a slightly more optimistic… END_OF_DOCUMENT_TOKEN_TO_BE_REPLACED

The balance of Romania’s direct investments abroad amounted to EUR 324 million in 2019, according to data published on Wednesday by the National Bank of… END_OF_DOCUMENT_TOKEN_TO_BE_REPLACED 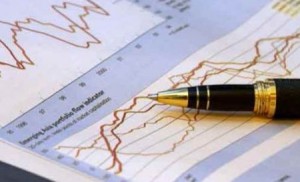 The National Institute of Statistics confirmed the last mid-month signal estimate and announced a 4.0% increase in the Gross Domestic Product for the first quarter of 2018, on gross series and a 4.2% increase on the seasonally adjusted series.

Basically, the results are mixed, the bottom-line effect of last year’s good results has been felt both in the 4% increase over the same period in 2017 and in the 0% level which, paradoxically, is less worrying than the first reporting.

The one that assumes we shall need a rate of 6.6% by the end of this year in order to obtain the 6.1% increase estimated by the National Commission for Strategy and Prognosis.

In nominal terms, the quarterly GDP was RON 176.7 billion, with the mention that this first quarter of the year has a weight of about 19% in the final result for the current year.

We remind that the Ministry of Finance works with reports where the 2018 GDP was estimated at about RON 930 billion, a level to which the public deficit of 2.97% of GDP would also be related.

Beyond the series of values showing the evolution of GDP, which maintained unchanged, the novelty of the INS announcement is the contribution of the resource categories to the economic growth.

According to the INS data, it is easy to see that “the lion’s share” came to the manufacturing sector (1.0%), while trade contributed only “0.8%”, which contradicts the thesis of a consumption-based growth.

But this happens given the fact that the 4% growth rate was much closer to potential GDP (namely in the context of maintaining macroeconomic balances) than last year when it had increased to a level now estimated at 6.9%. It should also be kept in mind that gross value added exceeded the 90% of GDP threshold and contributed 80% of the economy’s advance. 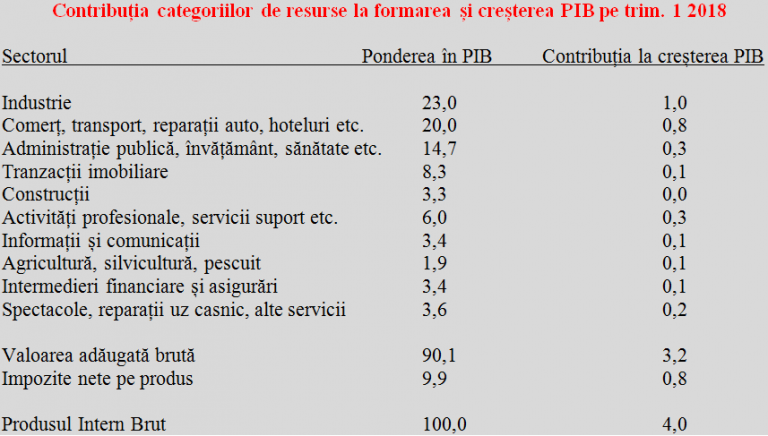 The share of public administration in the GDP formation rose to 15% in the context of consistent increases in salaries in the public sector and the contribution to GDP growth reached 0.3%, the same as the one marked by professional activities and support services (with the mention that, salary increases in the public sector are assimilated to an improved performance)

It should also be noted that the level of the economic growth to be communicated to Eurostat to ensure the international comparability is 4.2% as a result of adjusting gross data by the seasonality.

Otherwise, the growth rate compared to the previous quarter registered at the beginning of this year is the highest in the last six quarters and matched the level in the first quarter of 2016.

Household consumption had a 3.8 percentage point influence on the GDP growth, while net exports brought a minus of 0.6 percentage points, meaning an internal deficit in the capacity to cover the domestic demand, a trend in expansion as a result of the significant increase in the purchasing power (see table). 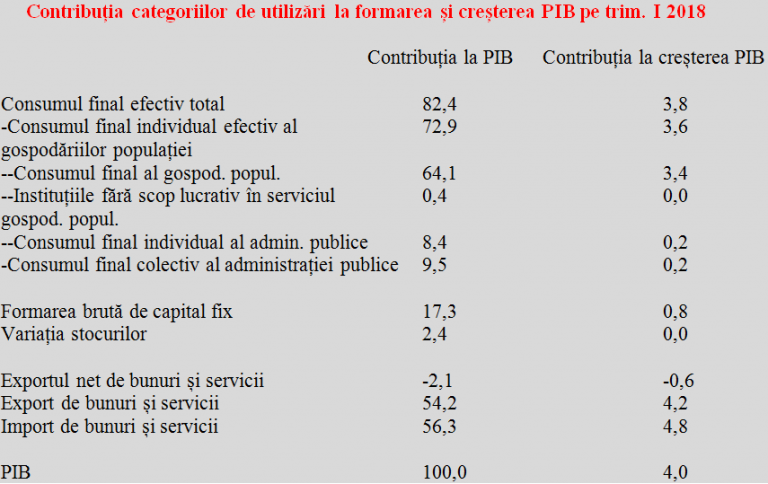 With a share of only 17.3% of the gross fixed capital formation on the use of GDP and a 0.8% influence on the economic growth, the prospects of bringing production and work productivity (which followed a downward trend in the first three months of the year) closer to the absorption capacity of the domestic market does not look too good.

That means higher investments are needed, especially in the public sector.

Luca de Meo (foto), the new general manager (CEO) of Renault group, considers that Dacia project proved to be a miracle and that no one… END_OF_DOCUMENT_TOKEN_TO_BE_REPLACED

A former Soviet airbase in central Romania could become a hub for US Air Force operations in south-eastern Europe, where the Pentagon is seeking to… END_OF_DOCUMENT_TOKEN_TO_BE_REPLACED

Nuclearelectrica's Board of Directors has been mandated to initiate proceedings to terminate negotiations with China General Nuclear Power Group (CGN), as well as legal effects… END_OF_DOCUMENT_TOKEN_TO_BE_REPLACED

Romania imported an amount of electricity of almost 796 GWh in the first month of this year, by more than 36% above what it exported… END_OF_DOCUMENT_TOKEN_TO_BE_REPLACED

GFG Alliance has committed to invest one billion euros to upgrade Galati steel plant in order to reduce emissions and increase production. Another EUR 1… END_OF_DOCUMENT_TOKEN_TO_BE_REPLACED

The Transport Ministry, as the Intermediate Body in Transport, approved the financing request for the project "Construction of Sibiu - Pitesti highway", Sections 1, 4… END_OF_DOCUMENT_TOKEN_TO_BE_REPLACED

Lack of trust in authorities, corruption and low living standards are the main reasons why young people leave Romania. The data is part of a… END_OF_DOCUMENT_TOKEN_TO_BE_REPLACED

Romania is the EU country with the fewest cars in terms of the number of inhabitants, according to data recently published by Eurostat. We appear… END_OF_DOCUMENT_TOKEN_TO_BE_REPLACED

The Government is preparing the public for the first measures aimed at avoiding the budget slippage, which would be applied by the PSD-ALDE government. News… END_OF_DOCUMENT_TOKEN_TO_BE_REPLACED

French Prosecutor Jean-Francois Bohnert will be appointed as head of the European Financial Prosecutor's Office, a position for which he was heard on Thursday, 11… END_OF_DOCUMENT_TOKEN_TO_BE_REPLACED

Romania recorded the highest road deaths in the EU also last year, with 96 deaths per one million inhabitants in 2018, almost double the EU… END_OF_DOCUMENT_TOKEN_TO_BE_REPLACED

Sorina Pintea announced on Thursday further new changes that will be brought to the functioning of the health care system, including new rules for employment… END_OF_DOCUMENT_TOKEN_TO_BE_REPLACED

The new order on approval and selection procedures for insolvency practitioners is an important step to a very good direction, industry experts say. ANAF is… END_OF_DOCUMENT_TOKEN_TO_BE_REPLACED