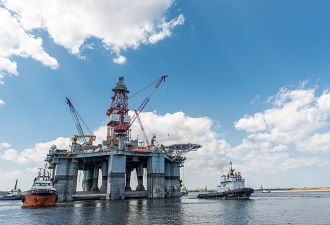 OMV Petrom (SNP) will sell another 50-60 perimeters from its portfolio of about 200, as most of the company’s investments focus on operating the Black Sea Neptune Deep perimeter, in partnership with American ExxonMobil.

The company will „focus on the most profitable barrels”. „We will reduce the complexity of the portfolio and other 50-60 deposits will be sold,” company’s half-year report mentions.

The transfer of another 19 „marginal deposits” already took place on 1st of August, in line with the company’s strategy of „value above the volume”.

The SNP’s investment budget amounts to RON 3.7 billion this year, of which 75% is allocated to exploration and production, for more than 100 new wells, 1,000 major repairs and the continuation of the activity on Neptun Deep.

The company has already invested more than RON 2.1 billion in the first semester of 2018, 130% more than in the same period last year, „mainly due to the increase in the level of drilling wells for development and exploration and intensified works in infrastructure projects in the upstream segment”.

„In the case of Neptun Deep, we intend to make a final investment decision in 2018 and that depends on the tax regime, the liberalization of the natural gas market and the development of the natural gas infrastructure,” the company said.

The company’s market value is almost RON 18.75 billion, according to the capitalization connected to the share price on the Bucharest Stock Exchange (BVB).