The Minister of European Investment and Projects, Cristian Ghinea, states that “PNRR is not Santa’s investment list; it is also a list of assumed reforms… END_OF_DOCUMENT_TOKEN_TO_BE_REPLACED

Luca de Meo (foto), the new general manager (CEO) of Renault group, considers that Dacia project proved to be a miracle and that no one… END_OF_DOCUMENT_TOKEN_TO_BE_REPLACED

A former Soviet airbase in central Romania could become a hub for US Air Force operations in south-eastern Europe, where the Pentagon is seeking to… END_OF_DOCUMENT_TOKEN_TO_BE_REPLACED

Nuclearelectrica’s Board of Directors has been mandated to initiate proceedings to terminate negotiations with China General Nuclear Power Group (CGN), as well as legal effects… END_OF_DOCUMENT_TOKEN_TO_BE_REPLACED

Oltchim, offered for sale in pieces 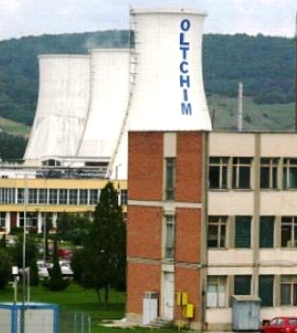 Oltchim chemical plant from Ramnicu Valcea, insolvent since January 2013, is offered for sale in pieces, in nine asset packages and investor selection process will be completed later this year, according to a company announcement.

“Oltchim will launch a competition for selling the assets, in several packages and we take into account at the moment nine such packages,” reads the company’s announcement.

The interested investors can submit letters of interest for any or all the packages of assets, until 30 September 2016, writes News.ro.

“The selection of the buyer / buyers will be based on the economic value of the bid and the process is expected to be finalized by the end of 2016”, reads the document.

Referring to the announcement of launching the Oltchim sale process, Vice Prime Minister Costin Borc, who is also Minister of Economy, said that the company’s financial situation has improved, despite the fact that it is insolvent, which gives hopes of finding an investor “for future sustainable economic activities of the company”, under the market conditions.

“I put Oltchim among my priorities even since the beginning of my mandate. Today, the company announced the intention to sell the asset packages and I hope that Oltchim will have a binding offer by the end of the year”said Borc.

Maintaining the industrial activity in the area of Ramnicu Valcea and preserving jobs are a priority for authorities, assured the Vice Prime Minister.

“The Ministry of Economy, Commerce and Relations with the Business Environment supports the transparency of the sale process, continue to maintain an open dialogue with the European Commission for clarifying the old issues of Oltchim, which will provide legal certainty to the potential investor,” said Borc.

In early April this year, the European Commission announced that it has launched an in-depth investigation to check whether debt cancellation by the Romanian state and the continuation of supplying Oltchim by state companies, despite the worsening financial situation of the plant, complied with the EU state aid rules.

Oltchim is the only producer in Romania of chlorine and polyether polyols. The company exports around 70% of the production.

The company became insolvent in January 2013 after the privatization failed with Dan Diaconescu in 2012 and the reorganization plan provides for the company to me sold for at least 307 million euros.

The state, which owns 54.8% of the shares, has also previously tried to privatize Oltchim, but with no success. At the last deadline, in December 2014, no investor has expressed the interest to take over the company.

Luca de Meo (foto), the new general manager (CEO) of Renault group, considers that Dacia project proved to be a miracle and that no one… END_OF_DOCUMENT_TOKEN_TO_BE_REPLACED

A former Soviet airbase in central Romania could become a hub for US Air Force operations in south-eastern Europe, where the Pentagon is seeking to… END_OF_DOCUMENT_TOKEN_TO_BE_REPLACED

Nuclearelectrica's Board of Directors has been mandated to initiate proceedings to terminate negotiations with China General Nuclear Power Group (CGN), as well as legal effects… END_OF_DOCUMENT_TOKEN_TO_BE_REPLACED

Romania imported an amount of electricity of almost 796 GWh in the first month of this year, by more than 36% above what it exported… END_OF_DOCUMENT_TOKEN_TO_BE_REPLACED

GFG Alliance has committed to invest one billion euros to upgrade Galati steel plant in order to reduce emissions and increase production. Another EUR 1… END_OF_DOCUMENT_TOKEN_TO_BE_REPLACED

The Transport Ministry, as the Intermediate Body in Transport, approved the financing request for the project "Construction of Sibiu - Pitesti highway", Sections 1, 4… END_OF_DOCUMENT_TOKEN_TO_BE_REPLACED

Lack of trust in authorities, corruption and low living standards are the main reasons why young people leave Romania. The data is part of a… END_OF_DOCUMENT_TOKEN_TO_BE_REPLACED

Romania is the EU country with the fewest cars in terms of the number of inhabitants, according to data recently published by Eurostat. We appear… END_OF_DOCUMENT_TOKEN_TO_BE_REPLACED

The Government is preparing the public for the first measures aimed at avoiding the budget slippage, which would be applied by the PSD-ALDE government. News… END_OF_DOCUMENT_TOKEN_TO_BE_REPLACED

French Prosecutor Jean-Francois Bohnert will be appointed as head of the European Financial Prosecutor's Office, a position for which he was heard on Thursday, 11… END_OF_DOCUMENT_TOKEN_TO_BE_REPLACED

Romania recorded the highest road deaths in the EU also last year, with 96 deaths per one million inhabitants in 2018, almost double the EU… END_OF_DOCUMENT_TOKEN_TO_BE_REPLACED

Sorina Pintea announced on Thursday further new changes that will be brought to the functioning of the health care system, including new rules for employment… END_OF_DOCUMENT_TOKEN_TO_BE_REPLACED

The new order on approval and selection procedures for insolvency practitioners is an important step to a very good direction, industry experts say. ANAF is… END_OF_DOCUMENT_TOKEN_TO_BE_REPLACED