Mugur Isarescu – BNR: Wages should increase by market forces not by politicians 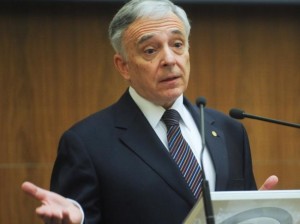 Wage increases should be based solely on productivity growth and be made „by market force”, not by politicians, the Governor of the National Bank of Romania (BNR) Mugur Isarescu (photo) said on Thursday in the opening of The Danube Triangle conference.

This way, the economy would not suffer in terms of competitiveness.

„In Romania, we face a series of challenges, which are certainly not only here, but also at the level of the European Union. One of the dramatic consequences would be that wages are increased by politicians, not by the market force,” Mugur Isarescu said.

The solution to the migration problem should come, though, „in a natural order, salaries should increase with the productivity and this way we would become competitive,” added the BNR Governor, quoted by Agerpres.

The Governor’s reaction came in the context in which the Labour Minister recently announced the advance of the minimum wage increase starting November 1 and the information was denied on Wednesday by Prime Minister Viorica Dancila.

„There are several opinions on wages: on one hand, they should be given by productivity, which would not lead to the erosion of competitiveness. On the other hand, salaries cannot be significantly below what exists in other economies, because that would lead to workforce loss, with dramatic consequences if the problem is not solved quickly. We face a migration problem, given that more than three million Romanians go to other European Union countries. Because of that, wages should increase. As I said, the only way to do that without affecting the competitiveness is to increase productivity,” Mugur Isarescu said.

The adoption of the euro by EU member states „is a matter of when not if. Because they do not have, or we, Romania, do not have an “opt-out” clause (which would allow some member states to stay outside the Eurozone, editor’s note), reminded Mugur Isarescu.

„We are not sceptical. We try to be realistic,” BNR Governor nuanced his statement. „The commitment to join the Eurozone is undeniable, but the way the complex economic convergence process is led largely fells to the authorities in the candidate countries”.

At the same time, real convergence in the Eurozone requires prudent macroeconomic policies, which are not always in line with the desire to achieve a rapid economic growth, the BNR Governor added.

„A smooth convergence process needs prudent macroeconomic policies, even though it is difficult to obtain a support for them in reality. In this context, central bankers’ concern to achieve the stability of prices is not always in line with the desire for a rapid economic growth. (…) The fear of inflation may be defeated by the desire to rapidly obtain prosperity, and central banks’ obsession with the stability can be seen as a refusal of evolution,” said Mugur Isarescu, quoted by News.ro.

The Governor warned that macroeconomic policies must be accompanied by structural reforms.

„For macroeconomic policies to be more efficient, they should go hand in hand with structural reforms that would provide a more flexible economic environment, in order to achieve a sustainable process of convergence with certain living standards,” Governor Isarescu said.

Member states’ strategies for moving to euro depend on their different situations.

Basically, „a currency board means you have a fixed exchange rate. In contrast, Romania has a flexible exchange rate and a regime of directly targeting inflation, just like Poland, Hungary, and the Czech Republic. That is why the approach is different. That does not mean that Romania, Hungary or Poland are sceptical about adopting the euro,” explained the Governor.

At the same time, „it cannot be overlooked that new member states that have joined the Eurozone (Baltic countries, Slovenia and Slovakia) are relatively small countries with a different level of real convergence and clearly with a much lower level of structural problems”.