The intergovernmental agreement between the United States and Romania in the nuclear-civil cooperation field has received the European Commission’s approval, and Romania will start construction… END_OF_DOCUMENT_TOKEN_TO_BE_REPLACED

A system which can save Romania from the packages waste and, at the same time, can ensure fulfillment of obligations in the field towards the… END_OF_DOCUMENT_TOKEN_TO_BE_REPLACED

Romanian Leu was much more stable during the pandemic than the currencies of Central European countries with a similar exchange rate regime, the Czech Republic,… END_OF_DOCUMENT_TOKEN_TO_BE_REPLACED

Hourly labour costs had increased by 14.29% in the fourth quarter of last year, in gross terms, compared to the same period in 2016, according to data announced by INS. It is more than double the currently estimated economic growth rate of about 7%, which shows this labour cost trend is unsustainable, generates inflationary pressures and reduces the competitiveness.

Although, beyond the value of the indicator that gives, by and large, the picture of the whole economy, there can be detected significant differences in the structure of wage increases. Differences with not very favourable implications for the prospects of the Romanian economy.

That is why we present how much the labour cost has increased in various branches of the economy, structured according to international norms (see table). 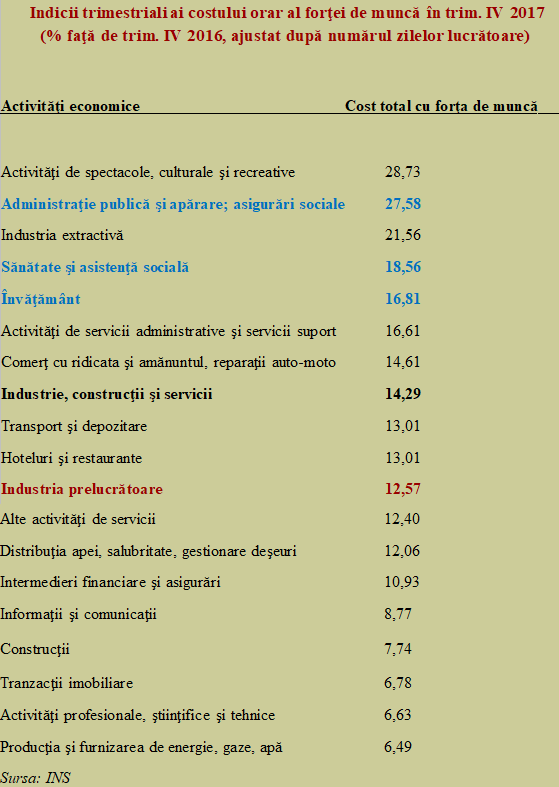 It can be easily noticed that the public sector is already positioned significantly above the national average. And, after the “liberalization” of wages at the level of administrative-territorial units, we found ourselves at the end of last year in front of the salary increases of civil servants much more than in the health and education sectors.

The rankings by categories of personnel in the Romanian economy appear almost like some sui-generis joke, with the staff from the public administration positioned between the staff from the entertainment, cultural and recreational activities and the one from the extractive industry.

In the middle of the ranking, going back to the technical side of the topic, we can notice the overall compliance with a theoretical principle of a faster wage growth in the service sector compared to the manufacturing sector (the so-called Balassa- Samuelson effect).

Despite an unsatisfied demand of skilled staff, the manufacturing industry appears below the national average, despite the significant productivity gains, and the successful IT & C sector appears, as it was normal, close to the general economic growth, which it silently supported.

The issue is whether this structure of cost increases in the economy is alright and whether the economy can accommodate the salary advance without losing the economic balance, hardly stabilized during this decade. Even though the labour market is becoming more and more affected by the lack of available workforce, following the years of departures to the West because of the lack of jobs.

Double-digit wage increases are extremely rare in a stable economy. The share of wages in the cost of products has already led, by the salary increases, to a 4.4% increase in the industrial production prices that is already visible, including in the stores and in the exchange rate.

Prior to this wage assault, there was a buffer (in a depleting process, if not already deleted) from the relatively low share that was due to the employees from the economic outcome, compared to the practices of the Western economies. It is noteworthy that this is a rapidly depleting resource, which can no longer be used in the next years.

Fortunately, we had a robust advance in the industrial work productivity in 2017 (the benchmark for the entire economy, because it is the only sector where it can be accurately calculated) after four years of successive decreases, and after it even entered the negative range in 2016:

Therefore, for 2018, it is important to maintain this robust growth in the labour productivity. But we should render unto Caesar the things which are Caesar’s, that is, stop maintaining the wages in the manufacturing industry to just 90% of the national average, which is totally atypical for a European country. It would be an extremely important change, even from the social equity’s perspective.

Symmetrically, in some form or another, it might be necessary to refine the evaluation modalities in this respect in the public sector as well, where measuring the social productivity of the work done is more difficult and subjected to increasingly subjective criteria.

Luca de Meo (foto), the new general manager (CEO) of Renault group, considers that Dacia project proved to be a miracle and that no one… END_OF_DOCUMENT_TOKEN_TO_BE_REPLACED

A former Soviet airbase in central Romania could become a hub for US Air Force operations in south-eastern Europe, where the Pentagon is seeking to… END_OF_DOCUMENT_TOKEN_TO_BE_REPLACED

Nuclearelectrica's Board of Directors has been mandated to initiate proceedings to terminate negotiations with China General Nuclear Power Group (CGN), as well as legal effects… END_OF_DOCUMENT_TOKEN_TO_BE_REPLACED

Romania imported an amount of electricity of almost 796 GWh in the first month of this year, by more than 36% above what it exported… END_OF_DOCUMENT_TOKEN_TO_BE_REPLACED

GFG Alliance has committed to invest one billion euros to upgrade Galati steel plant in order to reduce emissions and increase production. Another EUR 1… END_OF_DOCUMENT_TOKEN_TO_BE_REPLACED

The Transport Ministry, as the Intermediate Body in Transport, approved the financing request for the project "Construction of Sibiu - Pitesti highway", Sections 1, 4… END_OF_DOCUMENT_TOKEN_TO_BE_REPLACED

Lack of trust in authorities, corruption and low living standards are the main reasons why young people leave Romania. The data is part of a… END_OF_DOCUMENT_TOKEN_TO_BE_REPLACED

Romania is the EU country with the fewest cars in terms of the number of inhabitants, according to data recently published by Eurostat. We appear… END_OF_DOCUMENT_TOKEN_TO_BE_REPLACED

The Government is preparing the public for the first measures aimed at avoiding the budget slippage, which would be applied by the PSD-ALDE government. News… END_OF_DOCUMENT_TOKEN_TO_BE_REPLACED

French Prosecutor Jean-Francois Bohnert will be appointed as head of the European Financial Prosecutor's Office, a position for which he was heard on Thursday, 11… END_OF_DOCUMENT_TOKEN_TO_BE_REPLACED

Romania recorded the highest road deaths in the EU also last year, with 96 deaths per one million inhabitants in 2018, almost double the EU… END_OF_DOCUMENT_TOKEN_TO_BE_REPLACED

Sorina Pintea announced on Thursday further new changes that will be brought to the functioning of the health care system, including new rules for employment… END_OF_DOCUMENT_TOKEN_TO_BE_REPLACED

The new order on approval and selection procedures for insolvency practitioners is an important step to a very good direction, industry experts say. ANAF is… END_OF_DOCUMENT_TOKEN_TO_BE_REPLACED