Romania managed again to stand out at the EU level by recording the highest level of the public deficit in the third quarter of 2019,… END_OF_DOCUMENT_TOKEN_TO_BE_REPLACED

According to data provided by INS, in November 2019 Romania recorded a new alarming decrease in monthly industrial production at the level of the negative… END_OF_DOCUMENT_TOKEN_TO_BE_REPLACED

Almost 600,000 Romanian children and young people aged between 0 and 19 years, that is 12.6% of the total Romanian people in this age group,… END_OF_DOCUMENT_TOKEN_TO_BE_REPLACED

On Thursday, the appointed Prime Minister, Ludovic Orban, presented to colleagues from the National Office the document that he will submit to the Parliament, which… END_OF_DOCUMENT_TOKEN_TO_BE_REPLACED

The long-term interest rate fell below zero in the Eurozone and dropped to only 0.28% on average at the EU level, half as compared to… END_OF_DOCUMENT_TOKEN_TO_BE_REPLACED

Money for future budget amendment has been found: Army has spent only 8.15% of its endowment budget 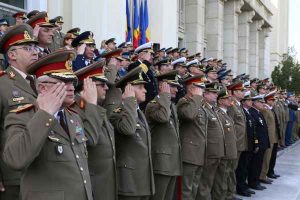 The situation of the salary rights in the Ministry of National Defence was the one that officially caused the resignation of Minister Adrian Tutuianu.

Blocked in the controversy of financial resources available for paying the military wages, various allowances and pensions, the analyses evade another figure that does not look good at all:

In the first eight months of the year, the Ministry of National Defence paid actually only 641 million lei representing invoices for the purchased fighting equipment and related VAT. That is, 8.15% of the procurement budget.

What Army has spent money on

The state of payments made between 1 January and 31 August 2017 in the Ministry of Defence shows that 6.2 billion lei have been spent in the first eight months of the year from the budget allocated to the ministry.

The expenditure structure is as follows:

In the state budget approved by the Parliament, the Ministry of National Defence has total budget allocations of RON 16.3 billion, namely 2% of GDP.

Relevant: In the structure of this budget, more than 50% of the money is allocated to the military wages and pensions and the current expenses such as utilities, food for the military personnel, subsistence, expenses for missions abroad and the representation missions.

Passing (perhaps too lightly) over the philosophical debate – the 2% must be allocated exclusively to the army’s endowment or can also be used for paying the pensions and wages – one thing is certain: for the Minister of Finance not to cut from the money of the Ministry of Defence at the second budget amendment, the new Defence Minister should sign invoices worth RON 7.3 billion in the following four months.

That depends, though, on the pace for finalizing negotiations with various external suppliers – all major procurement programs being currently at the stage of a memorandum.

In this context: the initial draft of the state budget prepared by the PSD specialists allocated RON 11 billion to the Ministry of Defence and the budget increased by another 5.6 billion only following the intervention of President Iohannis.

It should be mentioned: throughout 2017, current expenditures of the Ministry of National Defence are estimated at RON 8.5 billion

In May 2017, President Klaus Iohannis said at the end of the NATO summit in Brussels that the allocation of 2% of GDP to the defence sector in Romania has been appreciated by the Allies but warned that the money should actually be spent by the Government for what they have been allocated.

At that summit, NATO decided to monitor how the governments of the member states spend the allocation of 2% to the Defence Ministry.

The Transport Ministry, as the Intermediate Body in Transport, approved the financing request for the project "Construction of Sibiu - Pitesti highway", Sections 1, 4… END_OF_DOCUMENT_TOKEN_TO_BE_REPLACED

Lack of trust in authorities, corruption and low living standards are the main reasons why young people leave Romania. The data is part of a… END_OF_DOCUMENT_TOKEN_TO_BE_REPLACED

Romania is the EU country with the fewest cars in terms of the number of inhabitants, according to data recently published by Eurostat. We appear… END_OF_DOCUMENT_TOKEN_TO_BE_REPLACED

The Government is preparing the public for the first measures aimed at avoiding the budget slippage, which would be applied by the PSD-ALDE government. News… END_OF_DOCUMENT_TOKEN_TO_BE_REPLACED

French Prosecutor Jean-Francois Bohnert will be appointed as head of the European Financial Prosecutor's Office, a position for which he was heard on Thursday, 11… END_OF_DOCUMENT_TOKEN_TO_BE_REPLACED

Romania recorded the highest road deaths in the EU also last year, with 96 deaths per one million inhabitants in 2018, almost double the EU… END_OF_DOCUMENT_TOKEN_TO_BE_REPLACED

Sorina Pintea announced on Thursday further new changes that will be brought to the functioning of the health care system, including new rules for employment… END_OF_DOCUMENT_TOKEN_TO_BE_REPLACED

The new order on approval and selection procedures for insolvency practitioners is an important step to a very good direction, industry experts say. ANAF is… END_OF_DOCUMENT_TOKEN_TO_BE_REPLACED

Romania lost to Estonia in the final vote to get the non-permanent member position within the UN Security Council for the period 2020-2021. On Friday,… END_OF_DOCUMENT_TOKEN_TO_BE_REPLACED

eMAG hopes to get the opinion of the Hungarian Competition Council over the next two months for the acquisition of Extreme Digital, the market leader… END_OF_DOCUMENT_TOKEN_TO_BE_REPLACED