MFP: Government will borrow RON 74 billion in 2018, only through government bonds 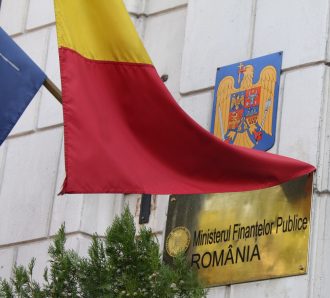 The total volume of loans planned by the Ministry of Finance (MFP) for 2018 amounts to about RON 74 billion.

Loans are to be secured by government bonds, not by „contracting any loan from international financial institutions or from a group of private banks, either domestic or international, in the context of a crisis,” an MFP release said.

The gross financing need that is mentioned „is determined by the forecasted budget deficit of -2.97% of the gross domestic product (approximately RON 27 billion) and the debt to be refinanced next year of approximately RON 47 billion”, according to the indicative Program of government securities issuance for 2018, mentioned in the release.

The Ministry of Finance has planned to borrow about RON 48-50 billion from the domestic market in 2018, similar to the level planned in 2017, while about RON 4.5-5 billion are to be drawn from external markets, which represents an increase compared to 2017.

The maturity structure would be 30% / 50% (short versus medium and long-term).

The Ministry of Public Finance (MFP) also consider attracting financial resources from foreign markets by issuing Eurobonds amounting to EUR 4.5-5 billion (equivalent), depending on the developments, conditions and opportunities offered by these markets, and withdrawing amounts from loans contracted from international financial institutions worth around EUR 0.2 billion.

In this context, the Ministry of Finance does not omit to show that Romania enjoys a sovereign rating in terms of investment grade issued by the most important international rating agencies (Moody’s, Standard & Poor’s and Fitch) with a stable outlook.

MFP considers that Romania is on an „honourable” 5th position in the ranking of the lowest levels of public debt in the EU.