Romania imported an amount of electricity of almost 796 GWh in the first month of this year, by more than 36% above what it exported… END_OF_DOCUMENT_TOKEN_TO_BE_REPLACED

GFG Alliance has committed to invest one billion euros to upgrade Galati steel plant in order to reduce emissions and increase production. Another EUR 1… END_OF_DOCUMENT_TOKEN_TO_BE_REPLACED

The transition to a green economy needs to be supported by new, additional European funds, distinct from Romania’s allocations from the future EU multiannual budget.… END_OF_DOCUMENT_TOKEN_TO_BE_REPLACED

Romania fell 3 places to the 10th position in the ranking of largest investments made by the European Bank for Reconstruction and Development (EBRD), after… END_OF_DOCUMENT_TOKEN_TO_BE_REPLACED 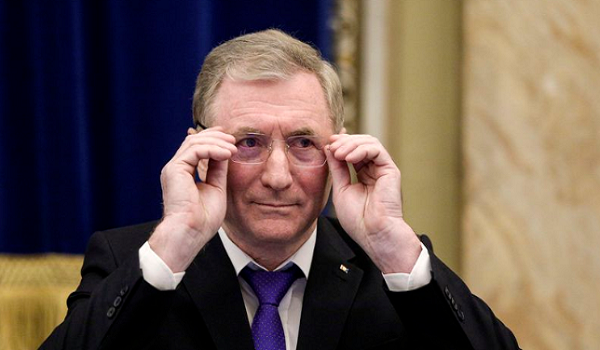 Minister of Justice announced on Wednesday that asks for the dismissal of General Prosecutor Augustin Lazar (photo) for 20 reasons (they could be more, Tudorel Toader wanted to stress) presented in the assessment report on Augustin Lazar’s managerial activity.

It is noteworthy to mention that the announcement was made on the very day when President Klaus Iohannis discussed at Cotroceni with the parliamentary parties the possibility of a pact on the judiciary.

According to the procedure initiated, the revocation proposal goes to the Superior Council of Magistracy (CSM), where the Prosecutor’s Section has to issue an advisory opinion.

Minister Toader’s report and CSM’s opinion are then sent to the Presidential Administration so that the head of state to make a decision – signs or not the revocation decree.

We remind that Laura Codruta Kovesi has been dismissed as head of DNA following a similar assessment of her managerial activity.

The President was forced to sign the revocation from office after the Constitutional Court ruled that he must implement the request of the Justice Minister because he does not have an own discretionary power in the revocation proceedings, but a power to check its regularity.

What that article says:

Prosecutors operate in accordance with the principles of legality, impartiality and hierarchical control, under the authority of the Minister of Justice.

What the Venice Commission says in its opinion on the laws on the judiciary regarding the way CCR interpreted the provision:

“CCR decision that imposed DNA chief’s dismissal leads to clearly strengthening the Minister of Justice’s capacities regarding the prosecutors, while, on the contrary, especially in the current context, it would be important to strengthen prosecutors’ independence and increase the role of institutions that could balance the minister’s influence – the head of state and CSM.”

Because no other meaning can be assigned to this article, after the Constitutional Court has ruled, the Venice Commission proposes for the provision to be amended when the fundamental law is revised:

In this respect, a key measure would be to amend this provision, in the context of a future revision of the Romanian Constitution.”

It is no longer possible to support the access to and the exercise of the management position within the Public Ministry.

The gravity of behaviours, general prosecutor’s public messages hijacked the activity of the Public Ministry from its constitutional role,” Minister Toader said before announcing the initiation of the revocation procedure.

General Prosecutor Augustin Lazar said on Wednesday evening that this assesement report is actually the answer that the Government gives to the Venice Commission, and does not include reasons, but “stupid sayings.”

“I am the Minister of Justice who made the nomination of Mr. Augustin Lazar as General Prosecutor of the Prosecutor’s Office attached to the High Court of Cassation and Justice. I have an obligation to publicly react to statements made by Minister Toader on the alleged illegality of this proposal. I make the following clarifications:

Some additional elements. Prosecutor Augustin Lazar had at that time 34 years of uninterrupted work in his profession and only “very good” ratings obtained throughout his career. At the time of the proposal, Augustin Lazar was general prosecutor of the Prosecutor’s Office attached to Alba Iulia Court of Appeal, within the second mandate obtained through a contest organsized by CSM. The Council checks the formal criteria of seniority, qualification and lack of professional sanctions prior to the appointment to a senior management position. CSM verified the fulfilment of requirements in December 2015 when Prosecutor Lazar obtained the second mandate as General Prosecutor within the Prosecutor’s Office attached to Alba Iulia Court of Appeal. And, as I said in April 2016, when I filed the nomination for the General Prosecutor of Romania.

Romania imported an amount of electricity of almost 796 GWh in the first month of this year, by more than 36% above what it exported… END_OF_DOCUMENT_TOKEN_TO_BE_REPLACED

GFG Alliance has committed to invest one billion euros to upgrade Galati steel plant in order to reduce emissions and increase production. Another EUR 1… END_OF_DOCUMENT_TOKEN_TO_BE_REPLACED

The Transport Ministry, as the Intermediate Body in Transport, approved the financing request for the project "Construction of Sibiu - Pitesti highway", Sections 1, 4… END_OF_DOCUMENT_TOKEN_TO_BE_REPLACED

Lack of trust in authorities, corruption and low living standards are the main reasons why young people leave Romania. The data is part of a… END_OF_DOCUMENT_TOKEN_TO_BE_REPLACED

Romania is the EU country with the fewest cars in terms of the number of inhabitants, according to data recently published by Eurostat. We appear… END_OF_DOCUMENT_TOKEN_TO_BE_REPLACED

The Government is preparing the public for the first measures aimed at avoiding the budget slippage, which would be applied by the PSD-ALDE government. News… END_OF_DOCUMENT_TOKEN_TO_BE_REPLACED

French Prosecutor Jean-Francois Bohnert will be appointed as head of the European Financial Prosecutor's Office, a position for which he was heard on Thursday, 11… END_OF_DOCUMENT_TOKEN_TO_BE_REPLACED

Romania recorded the highest road deaths in the EU also last year, with 96 deaths per one million inhabitants in 2018, almost double the EU… END_OF_DOCUMENT_TOKEN_TO_BE_REPLACED

Sorina Pintea announced on Thursday further new changes that will be brought to the functioning of the health care system, including new rules for employment… END_OF_DOCUMENT_TOKEN_TO_BE_REPLACED

The new order on approval and selection procedures for insolvency practitioners is an important step to a very good direction, industry experts say. ANAF is… END_OF_DOCUMENT_TOKEN_TO_BE_REPLACED

Romania lost to Estonia in the final vote to get the non-permanent member position within the UN Security Council for the period 2020-2021. On Friday,… END_OF_DOCUMENT_TOKEN_TO_BE_REPLACED

eMAG hopes to get the opinion of the Hungarian Competition Council over the next two months for the acquisition of Extreme Digital, the market leader… END_OF_DOCUMENT_TOKEN_TO_BE_REPLACED