The implementation of the consolidated budget in the first five months of 2020 registered a deficit of RON 38.8 billion (3.59% of GDP), of which… END_OF_DOCUMENT_TOKEN_TO_BE_REPLACED

Romania remains the weakest innovator in the EU, with a score in last year’s indicator ranking at only 31.6% of the EU’s average performance, according… END_OF_DOCUMENT_TOKEN_TO_BE_REPLACED

According to March 2020 data, the EC Convergence Report for Romania points out that the long-term interest rate for convergence purposes was 1.5 percentage points… END_OF_DOCUMENT_TOKEN_TO_BE_REPLACED

The European Commission is doubling its efforts to show that Europe has learned the lessons of the past and will avoid now, after the “Great… END_OF_DOCUMENT_TOKEN_TO_BE_REPLACED

Rating agency Standard & Poor’s has confirmed the ratings for Romania at ‘BBB minus / A-3’ and maintained the negative outlook. This rating maintains Romania… END_OF_DOCUMENT_TOKEN_TO_BE_REPLACED

Interview with Fogh Rasmussen: “NATO’s role is to keep Russians out, Americans in and Europeans involved” 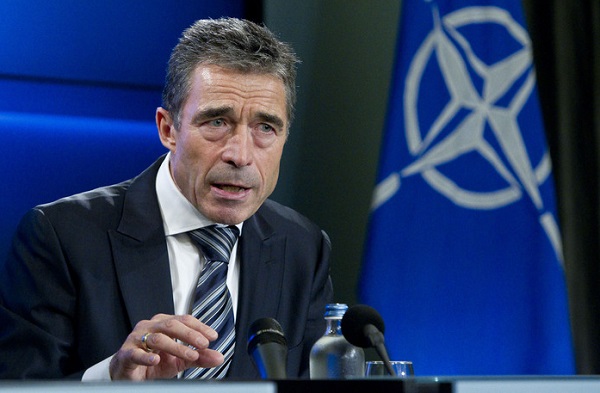 The text below is a series of fragments from the interview that former NATO Secretary General Anders Fogh Rasmussen gave to CRONICILE Curs de guvernare magazine – at a time when the North Atlantic Alliance is facing serious political confrontations between allies.

Against the background of Russia’s aggressiveness in the Black Sea region, China’s military rise and the slippage of NATO’s second-largest member (Erdogan’s Turkey), the issue of a European army divides the West.

The NATO-Russia founding act is no longer valid: it is a context different than the one in which it was signed;

America First, on the one hand, and North Stream II, on the other hand, weakened the Alliance’s political force;

in the coming months and years, NATO will be strengthened in the Black Sea – Russia’s intentions are now evident;

China’s autocracies can be counterbalanced by an understanding of authentic democracies:

There are some ideas raised through CRONICILE Curs de Guvernare by Anders Fogh Rasmussen, former NATO Secretary General, the man who has one of the best perspectives of the Alliance, obtained in the very complex moment of the reappearance of the Cold War.

What is the future of the transatlantic relationship at a time when attitudes like “America first”, but also increasingly “Europe in the first place” seems to become the new normality?

Transatlantic cooperation is at a historic minimum, partly due to policies like Nord Stream 2.

I hope to realize that we still have common values ​​and interests and that the fragmentation of the transatlantic relationship is only for the benefit of autocrats and dictators.

Today’s challenges are in part created by European policies such as Nord Stream 2, partly by America first attitude, which threatens to isolate Washington and diminish the global influence of the United States.

The first Secretary General of the Alliance, Lord Ismay, defined NATO’s rationale of being as “keeping the Russians out, Americans in and Germans down“. How do you see the role of NATO 70 years after its establishment?

If I am to formulate the same way, I would sum up NATO’s role as “keeping the Russians out, Americans in and Europeans involved.” This is how I see the role of the Alliance today.

What are the consequences of a reluctant US president’s actions against Article 5 and who seems to question the will to defend a member state such as Montenegro?

I would formulate this way:

In fact, NATO is stronger against the background of increased investment European states made in defence since 2014. At the same time, NATO has also been strengthened by the fact that European allies and the United States have deployed troops to strengthen territorial defence in the Eastern part of the alliance. From this perspective, such trends show that we are heading in the right direction.

But from a political point of view, the alliance has been weakened by the reckless statements of the United States President who expressed his doubts about his commitment to Article 5.

It is a dangerous message because it might tempt Putin and other autocrats to test our determination. However, I believe that eventually, if Russia would attack a NATO state, at that moment the alliance would react decisively.

Is it the time for a wider NATO presence in the Black Sea? After 2014 the focus was mainly on the northern part of the eastern flank.

In my opinion there is no doubt that the Black Sea will play an increasingly important role in the future. It is an area which is increasingly becoming an area of ​​interest for Russia and this is also showed by the start in the annexation of Azov Sea, at the end of last year.

NATO has begun to organize training and patrol missions in the Black Sea. I believe that the presence in the Black Sea will continue to be strengthened in the coming months and years.

Has the time come to go beyond the NATO-Russia Founding Act towards the deployment of significant permanent forces in the East?

We must consider the following: The NATO-Russia Founding Act was adopted in 1997 within a very different security environment.

The statements from the NATO-Russia Founding Act are certainly grounded in the security environment that was prevailing at that time – a time when we considered and saw Russia as a partner. Today we must realize that Russia is not a partner but a strategic adversary.

Moreover, it is Russia that violated first the NATO-Russia Founding Act, not NATO. There is a strong argument for a permanent presence in Central Europe in the direction proposed by Poland, but such a measure should be coordinated at the level of the Alliance.

At the same time, Europe can take additional measures to defend and secure the eastern flank, such as the development of strategic transport capabilities within NATO territory, as well as the development of a military Schengen area in order to deploy forces much faster. Our capacity to mobilize quickly is essential.

Are you worried about the recession of democracy inside the Alliance, the illiberal tendencies we see in countries such as Hungary and Turkey? How can these be counterbalanced?

Of course, such trends are worrying. At the same time, we need to be realistic and treat these member states as equal, not to talk down to them, because such an attitude will push them away even further.

Instead of discussing of pushing Turkey out of NATO, we should have a dialogue with Ankara. I am a believer in the continuation of the dialogue, not in punishing these countries.

Any punitive measures from international institutions will end up by strengthening autocratic trends in the respective countries.

Nuclearelectrica's Board of Directors has been mandated to initiate proceedings to terminate negotiations with China General Nuclear Power Group (CGN), as well as legal effects… END_OF_DOCUMENT_TOKEN_TO_BE_REPLACED

Romania imported an amount of electricity of almost 796 GWh in the first month of this year, by more than 36% above what it exported… END_OF_DOCUMENT_TOKEN_TO_BE_REPLACED

GFG Alliance has committed to invest one billion euros to upgrade Galati steel plant in order to reduce emissions and increase production. Another EUR 1… END_OF_DOCUMENT_TOKEN_TO_BE_REPLACED

The Transport Ministry, as the Intermediate Body in Transport, approved the financing request for the project "Construction of Sibiu - Pitesti highway", Sections 1, 4… END_OF_DOCUMENT_TOKEN_TO_BE_REPLACED

Lack of trust in authorities, corruption and low living standards are the main reasons why young people leave Romania. The data is part of a… END_OF_DOCUMENT_TOKEN_TO_BE_REPLACED

Romania is the EU country with the fewest cars in terms of the number of inhabitants, according to data recently published by Eurostat. We appear… END_OF_DOCUMENT_TOKEN_TO_BE_REPLACED

The Government is preparing the public for the first measures aimed at avoiding the budget slippage, which would be applied by the PSD-ALDE government. News… END_OF_DOCUMENT_TOKEN_TO_BE_REPLACED

French Prosecutor Jean-Francois Bohnert will be appointed as head of the European Financial Prosecutor's Office, a position for which he was heard on Thursday, 11… END_OF_DOCUMENT_TOKEN_TO_BE_REPLACED

Romania recorded the highest road deaths in the EU also last year, with 96 deaths per one million inhabitants in 2018, almost double the EU… END_OF_DOCUMENT_TOKEN_TO_BE_REPLACED

Sorina Pintea announced on Thursday further new changes that will be brought to the functioning of the health care system, including new rules for employment… END_OF_DOCUMENT_TOKEN_TO_BE_REPLACED

The new order on approval and selection procedures for insolvency practitioners is an important step to a very good direction, industry experts say. ANAF is… END_OF_DOCUMENT_TOKEN_TO_BE_REPLACED

Romania lost to Estonia in the final vote to get the non-permanent member position within the UN Security Council for the period 2020-2021. On Friday,… END_OF_DOCUMENT_TOKEN_TO_BE_REPLACED

eMAG hopes to get the opinion of the Hungarian Competition Council over the next two months for the acquisition of Extreme Digital, the market leader… END_OF_DOCUMENT_TOKEN_TO_BE_REPLACED