According to the data communicated by the NIS, in January 2020, Romania registered a new decrease in monthly industrial production, by -2.4% in gross series… END_OF_DOCUMENT_TOKEN_TO_BE_REPLACED

Dacia-Renault presented its “show car” Dacia Spring, “which prefigures the first 100% electric model of this brand” and will enter series production in 2021, according… END_OF_DOCUMENT_TOKEN_TO_BE_REPLACED

With current data and based on the legislation already adopted, Romania’s public debt is forecasted to reach 91.2% of GDP, according to the analysis of… END_OF_DOCUMENT_TOKEN_TO_BE_REPLACED

The progress in the development of Romanian infrastructure networks of utilities and roads is too slow compared to the needs and our neighbours’ progress, as… END_OF_DOCUMENT_TOKEN_TO_BE_REPLACED 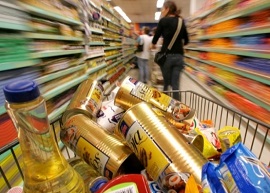 The waves caused by the political dispute covered the economic asperities that appear increasingly clearly on the horizon and have now reached the moment of the radical trend change.

For those who have forgotten how the difficult struggle has evolved with the reduction of the price increase in Romania, we recall the series that led us, against a very favourable international context from the international oil prices perspective, to values close to zero of this key indicator of the economic stability.

Basically, after cutting the VAT rates, both the standard one and the VAT on food, we are currently operating with prices from three years ago. But this resource of mitigating the officially registered inflation (which is not necessarily correlated with the economic performance, given the influence of repeated interventions from the state administration) has almost exhausted its intervention capacity.

No, five times higher inflation in just one year is not a game!

Soon, the effects of the significant increase in revenues via the wages from the state sector and the artificial increase of pensions (which will amplify the already chronic deficit of the state social security budget somewhere around EUR 4 billion a year) will translate into stimulating the economic growth, at the cost of threatening the country’s financial stability (see table).

The relatively rapid change (over the next 12 months) of the inflation position will come for some as a revelation but it has already been foreseen, according to the economic forecasting models. A five times higher inflation after a year is not a game, especially in terms of the adaptation capacity of public perceptions after five years of relative stability of prices.

The output gap shows the difference from the level of the economic growth that could have been obtained under conditions of economic stability. Its advance from 2% now to a rather problematic + 3,42% at the beginning of 2019 indicates a major danger of macroeconomic slippage and major risks of losing the stability on the EU scoreboard.

We have already exceeded the allowed levels for house prices and labour cost, we now have only 11 out of 14 indicators that we still meet after we have been among the brightest in our class, and most likely, if we keep the current economic path, we shall go down even further.

The situation does not look promising at all, even if we mention the rather favourable assumptions as to the evolution in time applied for fuel prices (which in the main scenario would speed down the price increases), volatile prices (the vegetables -fruits – eggs mix would lower the inflation index by half in 2018), and even the administered prices, which would depreciate the price advance at the beginning of 2019.

Regarding the administered prices, the government officials have now missed a favourable momentum for increasing the energy prices, the negative rate of nearly three percentage points in June 2017 being out of step with the inflammation, by a base effect, up to 3.85% as of June 2018.

It draws attention, in this context, the exit of the inflation rate which is under the influence of the monetary policy, the so-called CORE 2 adjusted, from the BNR target range of 2.5% plus/minus 1% after the third quarter of 2018. As well as the estimate of further deterioration of this indicator to more than four percentage points starting 2019.

All this data may seem dull but will soon translate into the everyday life where there will be changes visible in the pockets. From the shopping carts to the interests paid for loans, we will pay the invoice for the fairy-tale told by politicians, with more bread obtained without extra work (and efficiency).

Finally, but not least, two questions on which it would be worth reflecting.

Romania imported an amount of electricity of almost 796 GWh in the first month of this year, by more than 36% above what it exported… END_OF_DOCUMENT_TOKEN_TO_BE_REPLACED

GFG Alliance has committed to invest one billion euros to upgrade Galati steel plant in order to reduce emissions and increase production. Another EUR 1… END_OF_DOCUMENT_TOKEN_TO_BE_REPLACED

The Transport Ministry, as the Intermediate Body in Transport, approved the financing request for the project "Construction of Sibiu - Pitesti highway", Sections 1, 4… END_OF_DOCUMENT_TOKEN_TO_BE_REPLACED

Lack of trust in authorities, corruption and low living standards are the main reasons why young people leave Romania. The data is part of a… END_OF_DOCUMENT_TOKEN_TO_BE_REPLACED

Romania is the EU country with the fewest cars in terms of the number of inhabitants, according to data recently published by Eurostat. We appear… END_OF_DOCUMENT_TOKEN_TO_BE_REPLACED

The Government is preparing the public for the first measures aimed at avoiding the budget slippage, which would be applied by the PSD-ALDE government. News… END_OF_DOCUMENT_TOKEN_TO_BE_REPLACED

French Prosecutor Jean-Francois Bohnert will be appointed as head of the European Financial Prosecutor's Office, a position for which he was heard on Thursday, 11… END_OF_DOCUMENT_TOKEN_TO_BE_REPLACED

Romania recorded the highest road deaths in the EU also last year, with 96 deaths per one million inhabitants in 2018, almost double the EU… END_OF_DOCUMENT_TOKEN_TO_BE_REPLACED

Sorina Pintea announced on Thursday further new changes that will be brought to the functioning of the health care system, including new rules for employment… END_OF_DOCUMENT_TOKEN_TO_BE_REPLACED

The new order on approval and selection procedures for insolvency practitioners is an important step to a very good direction, industry experts say. ANAF is… END_OF_DOCUMENT_TOKEN_TO_BE_REPLACED

Romania lost to Estonia in the final vote to get the non-permanent member position within the UN Security Council for the period 2020-2021. On Friday,… END_OF_DOCUMENT_TOKEN_TO_BE_REPLACED

eMAG hopes to get the opinion of the Hungarian Competition Council over the next two months for the acquisition of Extreme Digital, the market leader… END_OF_DOCUMENT_TOKEN_TO_BE_REPLACED