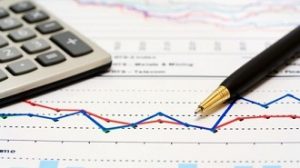 According to the data provided by INS, Romania recorded a 1.28% increase in prices in October 2017 compared to the previous month, the highest increase in the last five years (a similar value has not been registered since January 2013).

The most significant direct contribution to this trend was the 6.94% increase in electricity prices, which along with the 3.47% increase in fuel prices (both groups with important shares in consumer price basket) generated almost 55% of the exceptional value of monthly inflation.

Unfortunately, the predictable return of volatile commodity prices overlapped this evolution, prices that allowed (due to the seasonal decrease) a temporary stop in August in the increasing trend of inflation and the masking of tensions. Specifically, the price of vegetables and canned vegetables went up by 6.67%, the price of fruits and canned fruits by 2.54% and the price of eggs by 6.63% (incidentally, much less than in the Western countries affected by the pesticide contamination scandal).

It is noteworthy though that the cumulative influences of these volatile prices on the overall CPI represented 0.32% of 1.28% (exactly one quarter, with 0.22% from vegetables, 0.06% from fruits and only 0.04% from eggs), much below the effect of 0.44% (exactly one third) generated by the electricity and comparable to 0.29%, resulted from the fuel price increase (we do not get back to the excise duty increase, which has been added to the rising world prices).

The good news (in the given context) is that more than 80% of the monthly price increase has been conjunctural and WILL NOT REPEAT in the immediate future. It is also the explanation for the 2.7% annual inflation forecast provided in BNR’s analysis for the end of this year. The less good news is that nearly 20% of October inflation is spread across commodities and services, and this component resists much more in the medium term.

Somewhat paradoxically in this picture of the general price evolution, the decrease in the telephony tariffs calculated in relation to the European single currency (local currency RON slightly appreciated in October), had an effect toward the CPI decrease, due to the value of -0.19% recorded by INS, which contributed to a somewhat stranger distribution within the service category, in relation to the service inflation theory (only 0.16%, that is, exactly one eighth of the CPI).

Getting back to the above-mentioned „diffuse inflation” for food and non-food products, a bit spectacular but insidious with the increase of incomes, after the developments in the foreign exchange market, the question that arises is whether we reached a point where prices tend to maintain stable although not expressed in RON but in euro.

In case of an affirmative answer, a clear correlation is sufficient. Which may seem logical because we are dealing with the production of goods and services in Romania but not necessarily Romanian. With accounting operations that are seen at the level of a multinational group in euro, not in RON; multinational group to which nominal salary increases of + 1.5% in lei could be described as funny in the context of the inflation estimated for 2018. 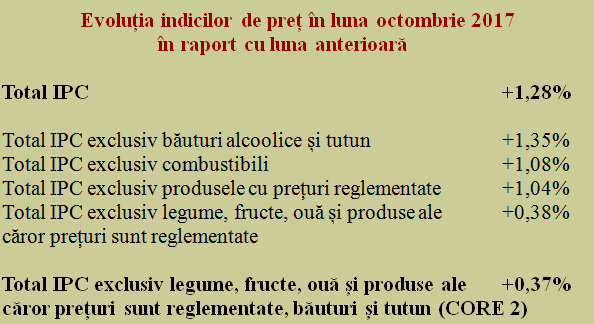 Technically, the situation is far from being as serious as it may seem if approached emotionally or from a strictly arithmetical approach. The CORE 2 indicator is witness to that, the indicator followed by the monetary policy. This indicator is clearly higher in the last two months than in the first half of the year, but does not look problematic at all, especially in the context that despite the price hikes in October, it remained almost unchanged (+0.37% versus + 0.35%), so we have the capacity to manage such situations.

The problem is, rather, how we shall manage the situation from the expectations’ perspective and how we will be able to keep calm with an increase that may seem high in prices but is generated by something very abstract for most of the population, such as the base effect.

That is, from November 2017 until March 2018, just the very low monthly inflation levels of the previous year (resulting from the fiscal policy) will push toward a temporary inflation peak. Which no longer has a significant increase potential in mid-term (see the level of 3.2% for the end of 2018 and the decrease to 3.1% estimated by BNR’s analysis for September 2019, the maximum forecast range).

For now, the AVERAGE inflation rate for the last 12 months maintained at + 0.7% according to the national methodology and increased to + 0.6% according to the harmonized HICP index at the EU level. Further, the relatively low levels of inflation in the previous year will be replaced by higher levels in the coming months and the average annual average inflation will tend toward to the annual inflation of the moment.

To position ourselves correctly on the turbulent events of the past four years in terms of tax and salary changes, it may be useful to recall the evolution of the annual average inflation to date (the one that shows the process over time and not the picture of the moment for the annual inflation that results from the ratio between a particular month to the corresponding month of the previous year).

To the surprise of those who may have forgotten that they have benefited from significant price cuts in the recent past, we mention that statistical data of INS show that we are STILL (of course, on a different structure) BELOW THE AVERAGE PRICES IN 2013. Most likely, at the level of the whole year, we can talk about a certain increase in prices (within the theoretical recommendation of 2% plus/minus something or 2.5% plus/minus 1%, customized for Romania), only in 2018.

That is, if we make the right decisions, we have the chance to stabilize our economic indicators to values that ensure the macroeconomic stability. Fortunately, as the title of a famous movie says, „The postman always rings twice”. However, if we do not answer, the postman may not ring the third time. We all know why the postman rings the doorbell.