How we stand compared to Eurozone. Differences between economic indicators 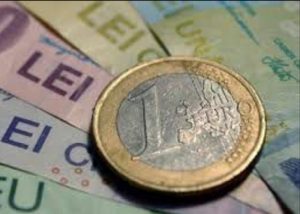 Romania announced its intention to join the Eurozone in 2024.

Adoption of the single European currency is not optional but included in the Treaty of accession to the EU, and we are now in a derogation period until we meet conditions necessary to move from Romanian leu to euro in a sustainable way, so as not to disturb the economy.

Four years ago, on this road to the Eurozone, Romania had succeeded in meeting all five nominal criteria required by the Maastricht Treaty:

In the meantime, we have come to where we met about half of the criteria. We have lost both in annual inflation (and we will have to make a significant effort to bring it back to the target of 2.5%, which would allow us to approximately meet the criterion) and in long-term interest rate, where we will need to obtain a similar adjustment, somewhere close to two percentage points).

As for the budget deficit, which for the third year is questionable in terms of maintaining within the limit of 3% (2.84% is the result for both 2017 and 2018), the budget implementation status after the first five months of 2019 (-1.43% of the estimated GDP, if it will also be achieved, as we are still below the forecasted level) does not look encouraging, especially that as of September 1 new significant increases of social benefits are expected (+ 15% in pensions and + 10% in the minimum guaranteed income).

Important inheritance from the socialist period, which we partially compromised, after the acts of unsustainable increases in salaries and pensions in 2008, we maintained the compliance with the limit of 60% of the public debt. And the exchange rate is still (very) good in the evolution, if we refer to foreign deficits, of 7.5% of GDP in commodities and 4.5% of GDP in the current account.

In context, let’s see where we are today compared to the Eurozone in some important economic indicators, according to official Eurostat data, taken from the national INS website: 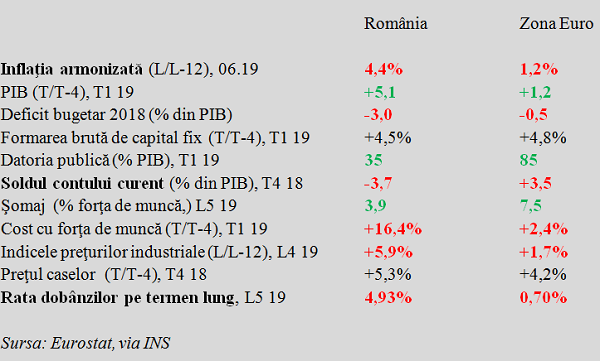 Beyond indicators that present us with good (less) and bad (twice as many in the selection made), one can draw the obvious conclusion that we are not quite “from the same story” because too many economic indicators differ, whether they have been decided in Maastricht or not. That is independent of the threshold of minimum 70% required as GDP/capita compared to the Eurozone average.

Before reaching the Eurozone door, we will have to find a way to bring key values, which summarize not only the evolution of the economy but also the accession to a set of values ​​in the economic management field, closer to Europe. Including through a more responsible long-term approach to the public budget.

The bad news is that we have work to do in several chapters of macroeconomic balance and measures cannot be popular. Good news is that the technically simple solution, which will solve (hopefully) most of the problems in a timely manner, would be to adjust the domestic consumption to real possibilities, given by the economic growth and the reorientation of the GDP advance towards the export, in order to decrease foreign deficits.

It is certain that we cannot continue to go toward a group of single currency countries and have a real chance of being accepted there while having a very different approach. First, we should recover the Maastricht indicators that we lost (ironically) after the crisis, without which there is no point to knock on Eurozone’s door.

And then we should seriously get to reforms in order to really converge with the practice of developed countries, focused on bringing the public budget closer to western dimensions and the absolutely necessary public investments.