Net subscriptions in Romanian mutual funds (the difference between invested and withdrawn amounts) became again positive in 2019 after they had been negative in 2018.… END_OF_DOCUMENT_TOKEN_TO_BE_REPLACED

Romgaz (SNG) announced the start of production in the deep area of Caragele deposit (Buzau), the biggest discovered in the last 30 years and one… END_OF_DOCUMENT_TOKEN_TO_BE_REPLACED

Romania managed again to stand out at the EU level by recording the highest level of the public deficit in the third quarter of 2019,… END_OF_DOCUMENT_TOKEN_TO_BE_REPLACED

According to data provided by INS, in November 2019 Romania recorded a new alarming decrease in monthly industrial production at the level of the negative… END_OF_DOCUMENT_TOKEN_TO_BE_REPLACED

Almost 600,000 Romanian children and young people aged between 0 and 19 years, that is 12.6% of the total Romanian people in this age group,… END_OF_DOCUMENT_TOKEN_TO_BE_REPLACED

How “social anti-dumping” Directive that Macron came up with could be: Small impact, incomprehensible high pressure from Western Europe 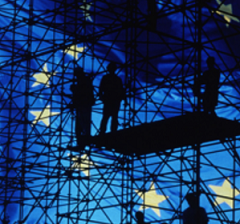 Member states are trying to reach a consensus by October about the European Commission’s proposals to amend the European Directive on posted workers.

Although it is a new subject dividing the European Union (Western Europe and the former communist states have divergent positions), it has a minor impact on the labour market, according to an analysis of the Bruegel think tank in Brussels.

The reform became known to the EU citizens only after the French president, Emmanuel Macron, made a tour in the eastern bloc this summer, including Bucharest, to try to secure the reform of the system for posted workers.

Central and Eastern European states reject the amendments, though. The only concession that they are willing to accept would be to support the proposals if shaped in an attenuated form, but with a condition – that carriers would not fall under this directive.

The employer is not required to pay the posted worker more than the minimum wage established by the host country.

Example: A firm in Romania gets a contract for building a construction in Paris. Employees will pay taxes and contributions, and their salaries are, even though higher than in Romania, well below those of local workers.

The current provisions date back to 1996 when the pay gap within the EU was not so high. Meanwhile, poorer countries have also become members, such as Romania and Bulgaria, and old member states, such as Spain, have faced big labour market problems.

In these 21 years, the economic and labour market situation in the European Union has considerably changed, and the Commission has found that some firms have benefited from the widening wage gaps and have used the system as a way to benefit from these gaps.

How European Commission wants this directive to be

The current Directive only stipulates that posted workers are entitled to the minimum wage in the host country. The new proposal provides for the application of the same rules on remuneration in the host member state as laid down by law or by collective agreements of general application.

That does not mean equal pay.

Remuneration does not only include the minimum wage but also other elements such as bonuses (for holidays, for example), allowances or wage increases based on seniority.

Member states will have the obligation to transparently state the various elements that form the remuneration on their territory. If they are laid down by law or collective agreements of general application, these elements will have to be considered in determining the salaries of posted workers.

The Commission also proposes that workers posted for more than two years (long-term posting) should at least be under the labour protection compulsory rules from the host member state.

Workers posted to Germany for more than two years will benefit from the rules in that country on the protection against abusive dismissal, even though the labour law in their country of origin does not provide for such protection.

The Commission proposes that the rules laid down in collective agreements of a general application become mandatory for posted workers in all economic sectors.

Within the subcontracting chains, member states will have the option of applying in the case of posted workers the same pay rules that are compulsory for the main contractor, even if these rules result from collective agreements with no general application.

They want for the principle of “equal pay for the same work” to be accepted and invoke two arguments:

Bulgaria, the Czech Republic, Estonia, Hungary, Lithuania, Latvia, Poland, Slovakia and Romania (suppliers of cheap posted workers) are against reforming the system and ask at least a compromise, to exclude the transport sector.

Poland is the most interested in getting these exemptions, as 30,000 companies would be affected, with a total of 300,000 drivers.

Romanian companies had 46,871 workers posted in different EU states in 2015, according to the European Commission data. 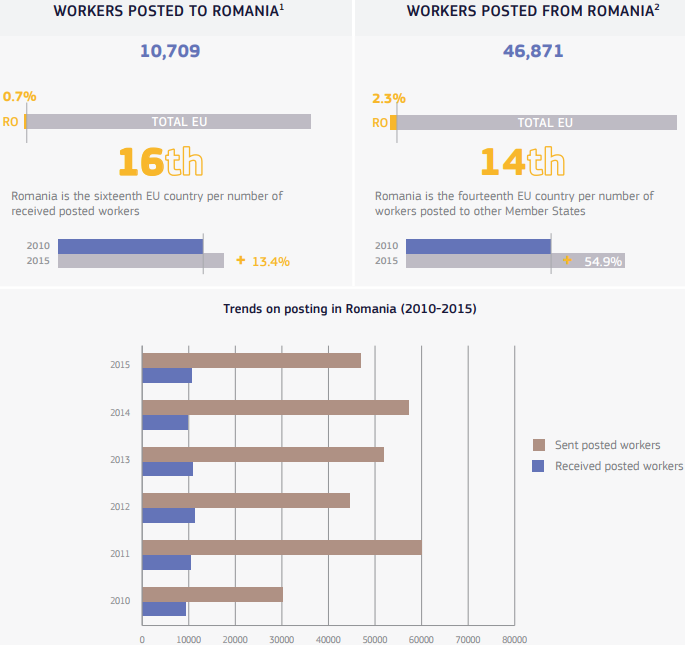 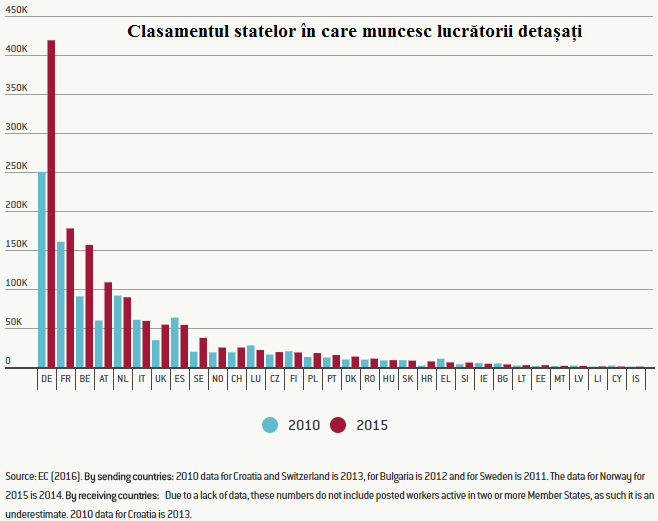 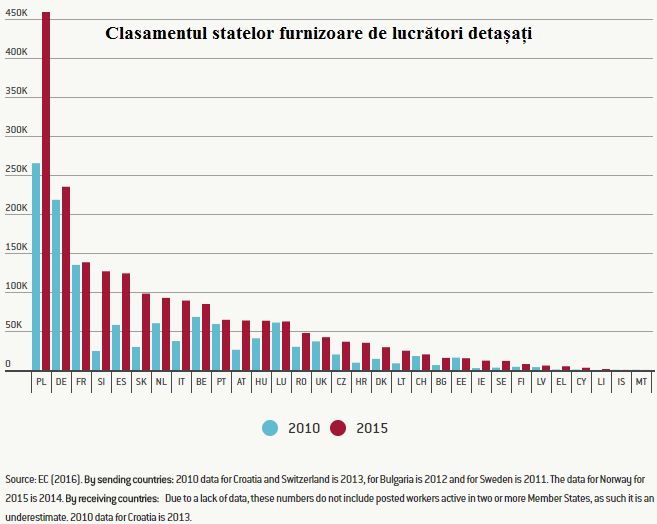 In relation to local employment, though, Luxembourg (with 9% of the total number of posted workers), Belgium (3.8%) and Austria (2.5%) are the countries where posted workers register the highest percentages.

Why impact on labour market will be low

According to an analysis of the Bruegel think tank, the impact on the labour market will be modest.

Seconded workers represent only 0.9% of all employees in the EU 28, which means only 0.2% in full-time equivalents. The average period during which workers are posted and provide services in another country is less than four months. On average, a worker is posted 1.9 times a year. The two million workers posted per year represent a small part of the overall mobility registered in the EU, where there are 11.3 million long-term migrant Europeans in another member state.

Estimates show that the shorter the periods of posting are, the lower the impact is. In Germany, 4.5% of construction workers are posted workers but the impact is lower as 90% of them are seconded for periods of up to six months. 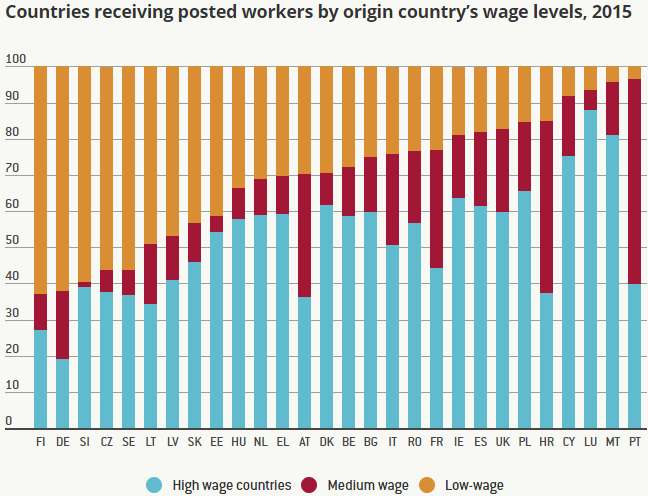 The Transport Ministry, as the Intermediate Body in Transport, approved the financing request for the project "Construction of Sibiu - Pitesti highway", Sections 1, 4… END_OF_DOCUMENT_TOKEN_TO_BE_REPLACED

Lack of trust in authorities, corruption and low living standards are the main reasons why young people leave Romania. The data is part of a… END_OF_DOCUMENT_TOKEN_TO_BE_REPLACED

Romania is the EU country with the fewest cars in terms of the number of inhabitants, according to data recently published by Eurostat. We appear… END_OF_DOCUMENT_TOKEN_TO_BE_REPLACED

The Government is preparing the public for the first measures aimed at avoiding the budget slippage, which would be applied by the PSD-ALDE government. News… END_OF_DOCUMENT_TOKEN_TO_BE_REPLACED

French Prosecutor Jean-Francois Bohnert will be appointed as head of the European Financial Prosecutor's Office, a position for which he was heard on Thursday, 11… END_OF_DOCUMENT_TOKEN_TO_BE_REPLACED

Romania recorded the highest road deaths in the EU also last year, with 96 deaths per one million inhabitants in 2018, almost double the EU… END_OF_DOCUMENT_TOKEN_TO_BE_REPLACED

Sorina Pintea announced on Thursday further new changes that will be brought to the functioning of the health care system, including new rules for employment… END_OF_DOCUMENT_TOKEN_TO_BE_REPLACED

The new order on approval and selection procedures for insolvency practitioners is an important step to a very good direction, industry experts say. ANAF is… END_OF_DOCUMENT_TOKEN_TO_BE_REPLACED

Romania lost to Estonia in the final vote to get the non-permanent member position within the UN Security Council for the period 2020-2021. On Friday,… END_OF_DOCUMENT_TOKEN_TO_BE_REPLACED

eMAG hopes to get the opinion of the Hungarian Competition Council over the next two months for the acquisition of Extreme Digital, the market leader… END_OF_DOCUMENT_TOKEN_TO_BE_REPLACED