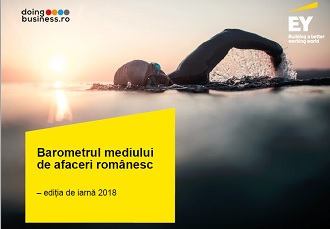 Entrepreneurs and leaders of Romanian private companies are distrustful about the consumption-based economic growth model because it does not offer but a short-term perspective, according to the Romanian business environment winter Barometer published on Wednesday by EY Romania.

92% of business people who responded to the EY survey don’t endorse the growth pattern based on consumption.

Most participating executives consider the growth based on consumption extremely worrying (26%) or very worrying (33%). Another 33% are „just” worried.

Proportions are only apparently paradoxical, according to EY consultants.

„Entrepreneurs say: Well, consumption leads to an increased demand, but in the short term. And they ask themselves: „What shall I do next year and after that?”, explained Ioana Mihai, EY Associate Partner for corporate finance solutions.

Incidentally, companies’ investment plans and their development face, overall, the obstacles that are already known:

Bureaucracy is ranked third in the top barriers (46% of responses)

More relevant, however, is the fact that other common dissatisfactions are placed far from top obstacles to the development of companies: the tax level, with 21% and difficult access to financing, with 9%.

Most signals from the EY Barometer on the entrepreneurs’ expectations for the next 12 months express the concentration of their concerns on the adaptation to the uncertainty of the fiscal and economic environment overall.

Even the progress in approaching the development, registered lately, shows the concern about the uncertainties of the future.

„Among the lessons learned (following the financial crisis) is the shift from an opportunistic and intuitive approach to projects to an analysis-based approach. Entrepreneurs make more educated decisions and try to cover their financial risks,” says consultant Ioana Mihai.

However, on the other hand, as credit appetite has not increased, companies protect their liquidity and/or seek alternative sources of financing by renegotiating contracts with suppliers.

So, the second most important strategic and capital-related priority for business leaders is „the cash release and improved management of the circulating capital” (55% of responses). 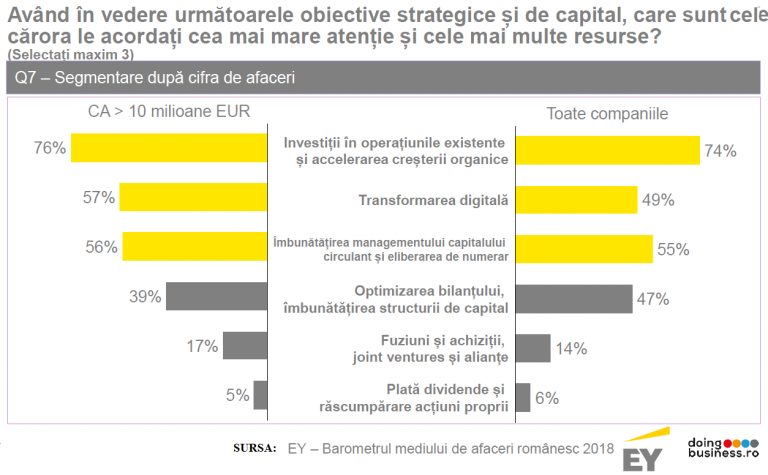 Even the most important priority does not signal a shift to a higher stage in the development of companies’ business: 74% of leaders focus „the highest attention and most resources on investment (only) in existing operations and accelerating the organic growth,” according to the EY Barometer.

One of the discouraging factors is the lack of public investment in infrastructure. „Companies are not encouraged by the fact that the state does not invest in infrastructure,” says Gabriel Sincu, EY Tax Associate Partner.

Comparison with the rest of the world

The rest of the priorities are different, the most important priority for the rest of the world is to identify business opportunities, including mergers, acquisitions and alliances, and dividend payments to shareholders ranks third.

Otherwise, the proportion of global optimists in terms of profitability over the next 12 months is more than double that of Romanian executives (74% versus 35%). 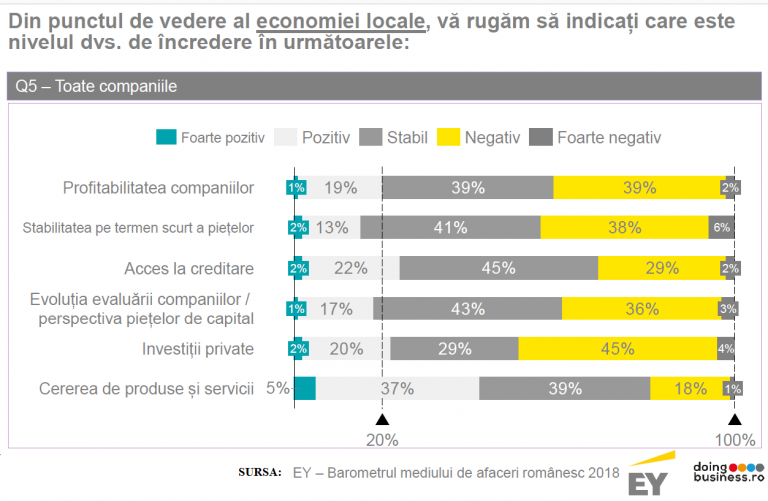 Romanian entrepreneurs are more pessimistic about all indicators of the local economy than those of the global economy:

„The biggest discrepancies appear in the case of the market stability and the evolution of investments, which can be explained by the fiscal and legislative instability in Romania. Stopping or reducing investment means including a lower appetite for company acquisitions, a decrease in competitiveness and a reduction of profitability,” according to the EY report.

The barometer „proves the context of respondents’ concerns about the risks of pro-cyclical and pro-consumption policies in 2018 as well, which an impact on current account deficits, tax deficit, inflation, and increasing vulnerability to external pressures,” said Mihaela Matei, Special Projects Coordinator at EY Romania, when presented the results of the survey.

At the same time, „the economic gaps compared to the other EU countries maintain. In the context of a record economic growth, but which mainly supports imports of goods and services, Romania remains the second poorest country in Europe with a poor infrastructure and questionable perspectives for the transition from growth strategies based on low costs to growth strategies based on innovation and knowledge,” according to the official mentioned.