The National Institute of Statistics confirmed the economic growth of 2.4% in gross series and 2.7% in seasonally adjusted series for the first quarter of… END_OF_DOCUMENT_TOKEN_TO_BE_REPLACED

The implementation of the consolidated budget in the first five months of 2020 registered a deficit of RON 38.8 billion (3.59% of GDP), of which… END_OF_DOCUMENT_TOKEN_TO_BE_REPLACED

Romania remains the weakest innovator in the EU, with a score in last year’s indicator ranking at only 31.6% of the EU’s average performance, according… END_OF_DOCUMENT_TOKEN_TO_BE_REPLACED

According to March 2020 data, the EC Convergence Report for Romania points out that the long-term interest rate for convergence purposes was 1.5 percentage points… END_OF_DOCUMENT_TOKEN_TO_BE_REPLACED

The European Commission is doubling its efforts to show that Europe has learned the lessons of the past and will avoid now, after the “Great… END_OF_DOCUMENT_TOKEN_TO_BE_REPLACED 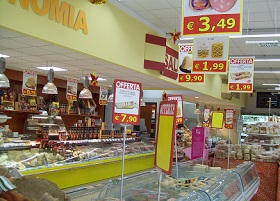 Eurostat has published an analysis of the price levels in the European countries that allows comparisons regarding the purchasing power and shows where we are compared to our colleagues from the EU.

To calculate the coefficients that allow such comparisons costs have been collected and processed for more than 2,400 products and services under a joint program with the organization of countries with developed economies, OECD.

1- What PPPs and PPS mean and how to use them

For GDP, using the nominal exchange rates would cause the overestimation of its real level in the countries that have higher prices compared to countries with lower prices. Using PPPs brings nominal values to a common denominator and allows a fairer comparison of the volume of national economies between countries, at a uniform price level.

What we should retain for now is that we have a GDP in euros close to almost 30% of the EU average and only the relatively low price level (51.2% of the EU average now) positions us at the GDP / capita level of 58%, widely publicised. In fact, we don’t have 58% of the European money, but it is as if we would have money. Just because we can buy with this 30% at home exactly what an European who has 58% of the EU GDP can buy at their home, on average.

It follows that we must be careful with the prices that will anyway get slowly (hopefully) close to the EU average as much as the amounts received, special caution, in euro, not in lei.

That’s because there is one more factor stabilized about five years ago, the euro / leu exchange rate, which is in fact floating and may significantly change at any time.

We present below a selection of price indices that translate the nominal values, mostly expressed in euros, to the values that correctly reflect the purchasing power in PPS. That, with the view to evaluate how much more expensive are certain groups of products or services, from the perspective of a common household, across the EU.

Note that, accidentally or not, the only Western developed countries that negotiated an accession clause allowing them not to adopt the single European currency (the UK and Denmark) or blocked de facto transition to euro (Sweden) are precisely the same countries with the highest price indices. It means that revenues are impacted the most by the relatively high prices compared to actual purchasing power. 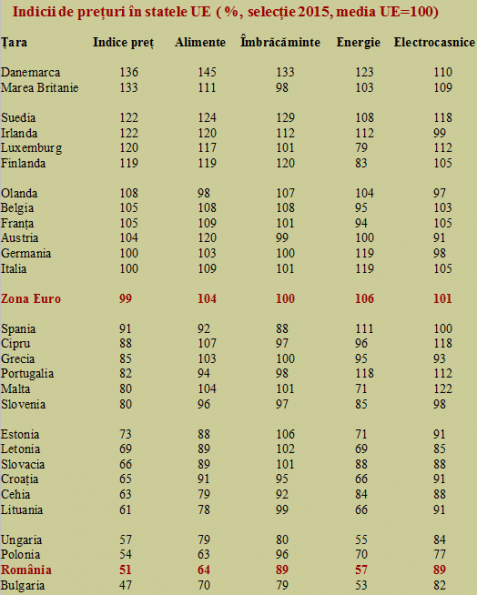 Also, it should be noted that the price tone at the continental level is set by the EU’s economic locomotive, Germany, despite the high prices for energy that its citizens must tolerate to support the competitiveness of its economy.

With a lower standard of living, Italy confirms and largely sets the benchmark price in the EU. Noteworthy for us is that these countries are also the main Romania’s foreign trade partners.

Surprisingly somehow, the Eurozone is positioned slightly below the EU average, based on the lower levels of a smaller groups of products that have not been included in the table (it has 95% of the average price in the alcoholic beverages and tobacco category, 99% in footwear, 98% in furniture, carpets, etc. and 98% in consumer electronics). Of course, the Eurozone enlargement process in the recent years, with countries where prices are lower, played an important role.

Right below the EU average are positioned, again accidentally or not, several countries facing serious economic problems, the Iberian Spain-Portugal and the Mediterranean Greece-Cyprus pairs. It proves that it is not very well to enter the Eurozone and align the prices before having a solid enough economy, with a steady growth and able to absorb shocks.

3- Useful findings for us

Finally, an important remark should be made, especially for Romanians who already have a relatively good standard of living, from the national perspective.

It can be seen how prices tend to rise as a country develops, meaning that GDP growth is going to erode at individual level. It means that as we move more money between pockets or accounts, we might find that there is not so much we can do with them, more than in the current situation.

Until 2008, the process of price convergence, mathematically quantified by some complicated coefficients to which is pointless to refer, was real. The crisis has caused some delay and even a return to the divergence of these prices, which helped us increase GDP / capita to the equivalent of 58% of the EU average. Generalized resumption of the economic growth in the EU countries brought the process of convergence back to the pre- 2008 path and Romania will be no exception.

A former Soviet airbase in central Romania could become a hub for US Air Force operations in south-eastern Europe, where the Pentagon is seeking to… END_OF_DOCUMENT_TOKEN_TO_BE_REPLACED

Nuclearelectrica's Board of Directors has been mandated to initiate proceedings to terminate negotiations with China General Nuclear Power Group (CGN), as well as legal effects… END_OF_DOCUMENT_TOKEN_TO_BE_REPLACED

Romania imported an amount of electricity of almost 796 GWh in the first month of this year, by more than 36% above what it exported… END_OF_DOCUMENT_TOKEN_TO_BE_REPLACED

GFG Alliance has committed to invest one billion euros to upgrade Galati steel plant in order to reduce emissions and increase production. Another EUR 1… END_OF_DOCUMENT_TOKEN_TO_BE_REPLACED

The Transport Ministry, as the Intermediate Body in Transport, approved the financing request for the project "Construction of Sibiu - Pitesti highway", Sections 1, 4… END_OF_DOCUMENT_TOKEN_TO_BE_REPLACED

Lack of trust in authorities, corruption and low living standards are the main reasons why young people leave Romania. The data is part of a… END_OF_DOCUMENT_TOKEN_TO_BE_REPLACED

Romania is the EU country with the fewest cars in terms of the number of inhabitants, according to data recently published by Eurostat. We appear… END_OF_DOCUMENT_TOKEN_TO_BE_REPLACED

The Government is preparing the public for the first measures aimed at avoiding the budget slippage, which would be applied by the PSD-ALDE government. News… END_OF_DOCUMENT_TOKEN_TO_BE_REPLACED

French Prosecutor Jean-Francois Bohnert will be appointed as head of the European Financial Prosecutor's Office, a position for which he was heard on Thursday, 11… END_OF_DOCUMENT_TOKEN_TO_BE_REPLACED

Romania recorded the highest road deaths in the EU also last year, with 96 deaths per one million inhabitants in 2018, almost double the EU… END_OF_DOCUMENT_TOKEN_TO_BE_REPLACED

Sorina Pintea announced on Thursday further new changes that will be brought to the functioning of the health care system, including new rules for employment… END_OF_DOCUMENT_TOKEN_TO_BE_REPLACED

The new order on approval and selection procedures for insolvency practitioners is an important step to a very good direction, industry experts say. ANAF is… END_OF_DOCUMENT_TOKEN_TO_BE_REPLACED

Romania lost to Estonia in the final vote to get the non-permanent member position within the UN Security Council for the period 2020-2021. On Friday,… END_OF_DOCUMENT_TOKEN_TO_BE_REPLACED